A Year on From Bitcoin’s All Time High: What Has Gone On?

Darryn Pollock
A year to the day, the cryptocurrency market hit its all time high as Bitcoin topped $20,000, but today, things are in a very different place 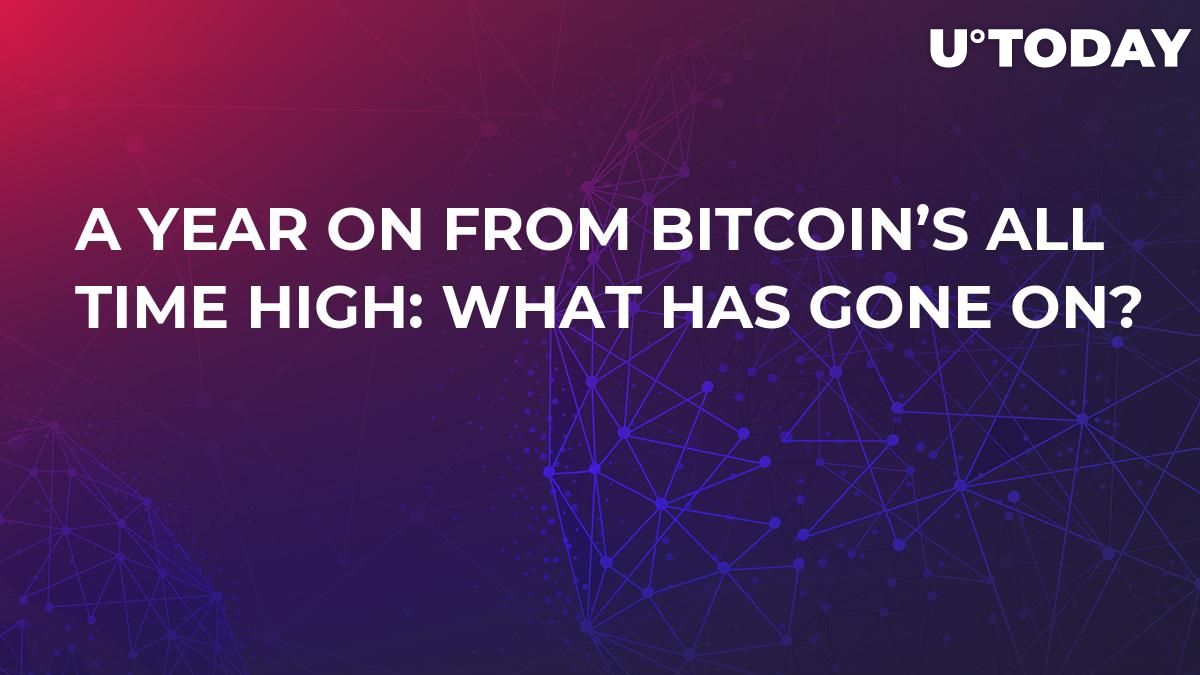 On December 17, 2017, the price of the major cryptocurrency had rocketed to close on $20,000 after a stellar month which saw the price of Bitcoin break through the $1,000 barrier with consummate ease. The hype and excitement around Bitcoin and cryptocurrencies was at its peak, but it peaked out at that mythical mark.

A lot has happened in the year since then: Bitcoin currently sits closer to $3,000, a price last seen in August of 2017. There have been many factors that have shaped this wild, year-long ride, and these factors have also set up the cryptocurrency market for an uncertain future.

From a speculative bubble to regulatory pressure, the manner in which Bitcoin entered the mainstream has led to it having a volatile ride through the markets. Its own makeup has also seen it expand and encompass many different facets of life, with blockchain technology a potential global disruptor.

Despite being over 10 years old, blockchain and Bitcoin have only really started making an impact in the grander scheme of global life in the past 18 months or so, and because of this, its future path has a long way to be written and shaped.

A general look over Bitcoin, year to date, paints an obviously negative picture, as the all time high of $20,000 was reached exactly a year ago today. It has been all downhill from there, with Bitcoin shedding over $7,000 in value from December 17 to the end of the year as it settled on $13,000 as its ending figure.

It has continued to slide downward as a bigger and more ferocious bear market took over. In February, the price dropped to $7,000 quite dramatically before there was a short rebound that took Bitcoin up to $11,500 again. But this was short lived as the decline continued.

What followed was some gentle undulations between $7,000 and $9,000 from April until July before a period of uncommon stabilisation in the $6,000 range took hold from September to November.

The movement of Bitcoin to it's all time high was always because of speculative investors who were trying to get on the bandwagon, and because of this, it is unsurprising that the Bitcoin price ended in a clear bubble.

Putting it in line

Part of the reason that the speculators’ bubble grew so much is because Bitcoin was a new, inclusive, and totally unregulated form of investment. Anyone with a smartphone could get in on it, and there was nothing to stop it or slow it — as a decentralised form of currency.

This drew in the investors, which drew in mainstream interest and more and more money, and eventually, it drew in the regulators who were forced to act to put Bitcoin in line. Businesses operating around the cryptocurrency were totally unregulated, and it was leading to damaging occurrences and hacks.

Because of this, places like China, and even Korea and Japan, took heavy steps in controlling cryptocurrency exchanges. More so, the likes of the SEC also stepped in and dealt heavy blows to fundraising vehicles like ICOs.

This regulator pressure stalled the growth of these blockchain businesses and ICOs and caused the speculators to start checking their actions and getting a bit fearful with their money. Any bad news that came from regulators scared off a lot of investors, and there were numerous sell-offs in this past year that spiraled into a bear market.

What does the future hold?

Based on the speculative investment of the blockchain and cryptocurrency space, many are proclaiming that Bitcoin and the like are dying and will soon be dead. However, its future is far more complex than that.

It has often been equated with the Dot Com bubble, and this is probably apt as like the Dot Com, it had a valuable underlying technology that operated almost separate from the hype.