We Are Getting to ICO Model’s Waterfall Moment: ICO Alert’s Robert Finch on Risks, Future

Katya Michaels
ICO Alert’s Robert Finch talks about the challenges and the future of the ICO model with its risks, uncertainty and investment opportunities 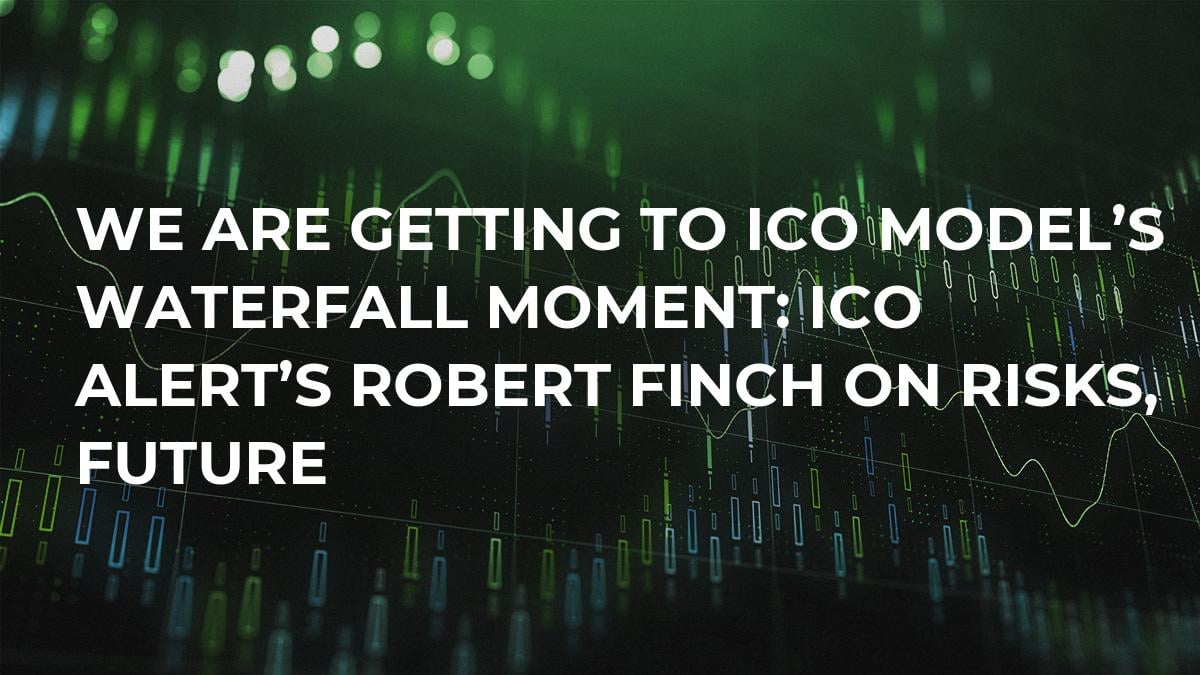 In the last few years, the ICO space has expanded tremendously, making the token market one of the most exciting, though risky, investment opportunities. With billions of dollars going into hundreds of ICOs, it’s difficult to weed out the gems from the scams, while the apparent confusion and indecision of regulatory bodies regarding ICO status makes the situation all the more complex.

To gain insight into the challenges and the future prospects of the ICO model, CryptoComes spoke to Robert Finch, Founder and CEO of ICO Alert, at TokenFest in San Francisco. ICO Alert is an ICO discovery platform that maintains a comprehensive list of active and upcoming Pre-ICOs and ICOs.

Katya Michaels: ICO Alert will be celebrating a one-year anniversary in April - looking back over this time, what have you learned? Has this journey taken you where you thought it would?

Robert Finch: I never expected any of this to happen, to be honest. My brother Mike and I have been in crypto since 2012/2013. Towards the end of 2016, we started missing out on ICOs that were selling out in 30 seconds, and we realized very quickly that we needed to compile our own list of every ICO that was happening.

So in April, I put up the website, never really intending for it to be a public facing website, certainly not a business. But once we got the word out and people started sharing the link, it became very clear that the community had the same need — to have that comprehensive source of information.

This last year has just been wild, everything has been totally unexpected and we are excited for the next year as well.

KM: Are there any specific plans you can reveal?

RF: We are looking forward to building up our discovery tools. We have that comprehensive list of ICOs and Pre-ICOs, and now My Portfolio, which was launched earlier this week and I just announced on stage here at TokenFest. We are excited to take it out of beta and develop more features to help our users discover ICOs and become their own venture capitalists.

KM: What are you hoping to achieve with My Portfolio?

RF: If you think about the ICO space right now, just this year alone there have been a thousand ICOs with $3 bln going into them. You can imagine, from an investor’s perspective, it’s very challenging to keep track of the ones you are interested in.

With My Portfolio, you can easily make your own shortlist of ICOs and add them to your portfolio. When the dates inevitably change, as happens a lot in the ICO space, you’ll get an update and you’ll always be in touch with what’s happening with that ICO or Pre-ICO.

KM: You have spoken about the “waterfall moment,” when most people will be invested in some kind of cryptocurrency. How close do you think we are to that?

RF: I would say the waterfall moment will definitely happen in the next five years. I think we are getting there, and the biggest piece right now that’s preventing it is custody within the institutional arena.

A lot of these institutional firms, hedge funds and investment funds, they have specific investment contracts where they can’t actually hold their own funds. It’s ironic because crypto is all about holding your own assets, but in the institutional arena, it’s totally different.

So as soon as somebody comes out with a really good custody plan, I think we are going to see a lot of institutional investors, and then by association all of their retail clients, coming into the space.

KM: Do you think products like My Portfolio will facilitate entry for the everyday investor?

RF: Absolutely. In this case, we are going toward consumers rather than institutional investors. We are empowering the everyday person to truly become their own venture capitalist. If you think about VC before, they were a few gatekeepers who decided whether a project lived or died. For the first time in history, we have this really disruptive, innovative ICO model where you can come up with an idea and if the crowd likes it, they can fund this idea and eventually use your decentralized application. It’s very exciting.

KM: The first mainnet-ready Lightning Network release has a lot of people excited about the scalability of Bitcoin. Will it help bring the waterfall moment closer?

RF: I think scalability is one of the biggest issues other than custody from the institutional side that’s really holding crypto from hitting that waterfall moment. I think usability, though, is another one. Once scalability is solved, usability will mean having a decentralized app where you don’t have to pay transaction fees, and consumers can be using a decentralized app on a Blockchain without knowing it.

Staying in the US

KM: In your opinion, how will the actions of regulatory bodies like the SEC and CFTC impact the ICO space?

RF: It’s so interesting right now because the SEC says that cryptocurrencies are securities, the CFTC says they are commodities, and the IRS says they are property — but legally, it can only be one of those three. In any case, ICO’s are way too powerful of a model to just go away, and they will continue to pick up speed as they have been this year, even in a bearish crypto market.

It’ll just be a matter of do the ICOs stay in America, or do they go overseas. I would urge the regulators to get their stuff together, come to a consensus and make a very clear regulatory path.

Then, ICOs can stay in America and benefit American entrepreneurs and investors, rather than going overseas to some other country. Countries that are more open to ICOs are going to be the ones that benefit the most from this new industry.

KM: How about the Google advertisement ban, following closely on Facebook’s similar decision? Will this have a damaging effect on the cryptocurrency market and ICOs?

RF: I think this move is similar to what governments around the world are doing. For example, in South Korea, ICOs started getting out of control. The government came in and put down a blanket, saying “hey, stop this while we can figure out what’s going on and we can weed out the scams.” And then recently, their ministry of finance came out and said :“ICOs are allowed again but under this specific set of rules.”

I think we are going to see the same with Google and Facebook. They are going to come out, sooner or later, and say “we’re going to allow cryptocurrency and ICO ads but under this specific set of rules.”

KM: Perhaps this will also help lock out the scams while bringing legitimate players to the surface.

RF: Absolutely. We are already seeing this - the amount of money pouring into the ICO space overall continues to increase, but the average amount raised per project is actually decreasing. We think that’s a very good thing because from our perspective it shows that a lot of the money is flowing into legitimate projects that are doing innovative things. We’re excited that the community is raising the bar for what is an investable ICO.

KM: Is there a checklist you follow when you examine the ICOs? What would be your advice for the investors in terms of what to look for?

RF: I think that the easiest thing is just to look at the team. When you look at a project, if they don’t have a team page, you probably shouldn’t invest because it’s just some anonymous person. If the team members have a good track record, have been in the crypto space for a while, you can look at some of their past work and make your own objective decision about whether or not you want to invest in the ICO.

KM: What kinds of ICOs do you personally enjoy seeing emerge in the market?

RF: My favorite one right now that solves scalability and usability is EOS. They are essentially building a platform that allows scaling to millions of transactions per second, and also solves usability requirements like transaction fees. They also do some interesting things with human readable account names.

Right now when you send a Bitcoin or Ethereum transaction, you are sending it to this really long address of letters and numbers, and if you make a mistake, your money is just gone. But with EOS, you would be sending money to an account name like a Twitter handle. I think it would be a much friendlier way to bring people into cryptocurrency without the fear of losing funds.

I think we need to see more decentralized apps that solve real problems. There are a lot of ICOs now that have an existing business model and they just see the token as potential to raise money. The few that are really doing something innovative and thinking outside the box are the ones that are going to bring the most benefit in the long term.

KM: What problem would you solve if you were to launch an ICO?

RF: Well, this is the nerd side of me talking, but I’d go for decentralized DNS servers. Right now, when you go to a website, you are really going to an IP address, a series of numbers and periods, but that’s a big centralization point of the internet. So if somebody wanted to take down that website, they could go to ICANN, the centralized DNS provider, and request that they take it down. Once someone solves that centralized Domain Name Server issue, I think we are going to see a lot of really cool innovative applications come out.