Darryn Pollock
The way in which Bitcoin has permeated the mainstream is nearly unbelievable. 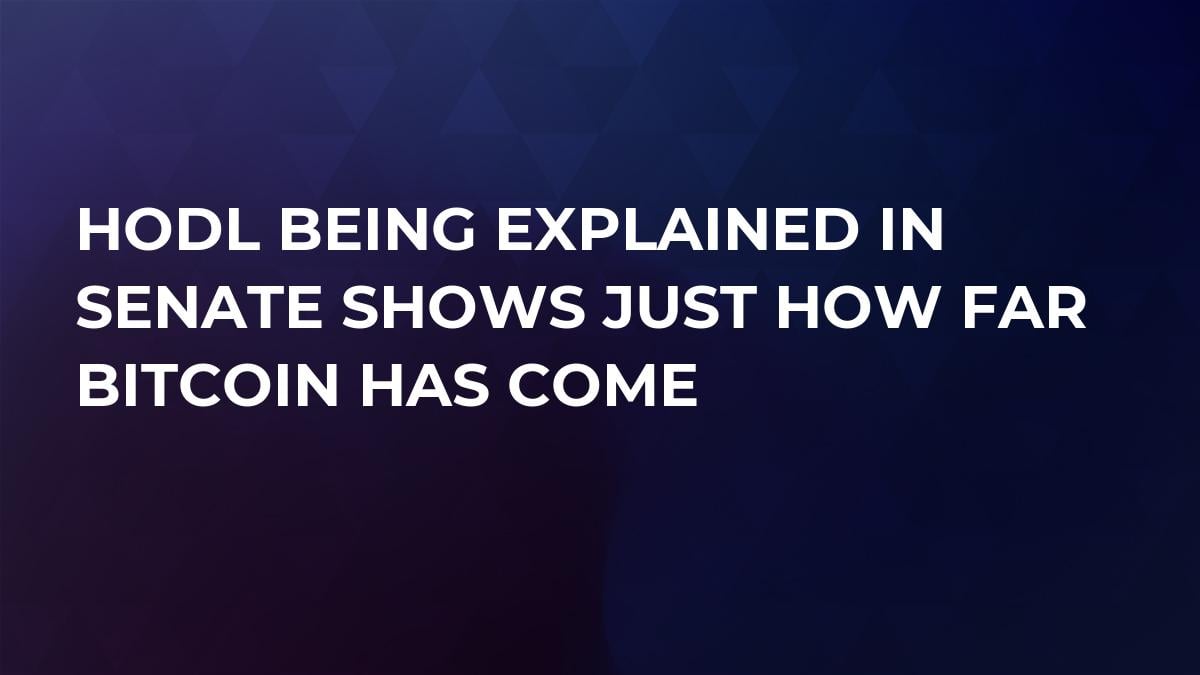 There was an incredible moment that happened at a serious meeting of the Senate in the US on Tuesday. Not only was Bitcoin’s direction further clarified by the heads of the CFTC and the SEC, adding a level of positivity, but the inner workings of Bitcoin were laid bare.

Christopher Giancarlo, the chairman of the Commodity Futures Trading Commission (CFTC), one of the key regulators who can make or break the legality of Bitcoin in the US, was questioned on what he believed Bitcoin actually was.

The Chairman said it displayed features of multiple asset classes. But when viewed as a store of value like gold, Bitcoin behaves “very much like a commodity,” he added.

He then went on to expand on this point, showing off his knowledge of the Bitcoin community who have been ingrained by this notion of HODL- especially in recent weeks.

”If you go on to the Bitcoin Twitter universe, you will see the phrase ‘H-O-D-L,’ meaning hold on for dear life, meaning they buy it and hold it,” he explained. He also revealed that his niece is a Bitcoin Hodl-er.

The news was that came out of the Senate was heralded as it pointed towards positive steps being made by US regulators who predominantly have been painted as menaces to the cryptocurrency universe.

But the fact that Giancarlo went as far as to explain the term HODL, and to admit that his niece, as well as his children, were au fait with cryptocurrencies just shows how far the coin has come and evolved.

People often stress when regulators start to get involved in things like Bitcoin. The digital currency is supposed to be decentralized and untouchable by those who dictate terms of control. However, because Bitcoin is tickling the interest of these leaders of countries means it is worth a look in.

From whence it came

Bitcoin really first hit the mainstream headlines when Silk Road came tumbling down and it emerged that there was this odd digital currency that was fueling this illicit economy. It was seen as dark and dangerous, and a tool of drug lords and criminals.

Now, it has moved along so much that it is considered an investment tool for almost anyone with access to a smartphone, which is great, but more impressive is that regulators are viewing it as more than just a threat.

It can be argued that Clayton and Giancarlo have an obligation and a job to do when it comes to delving into Bitcoin. However, the fact that they have gone above and beyond proclaiming that they need to understand it all first.

Giancarlo, whether he’d admit it or not, is a participate in the cryptocurrency community on a personal level. His decision can, of course, shape the future of the coin, but because he has decided to learn more than just the nuts and bolts, going into the culture and understanding why it exists, shows a fresh understanding.

Regulators need to truly understand Bitcoin and other Blockchain applications to be able to pass fair judgment; they need to give it every chance, and give every chance to seeing the light.

China and others may slap blanket bans on everything crypto, but that is indicative of pure ignorance.