Vera Yurina
New to the blockchain? One of the basic concepts is smart contracts. We will tell everything that any beginner needs to know about them in a simple way 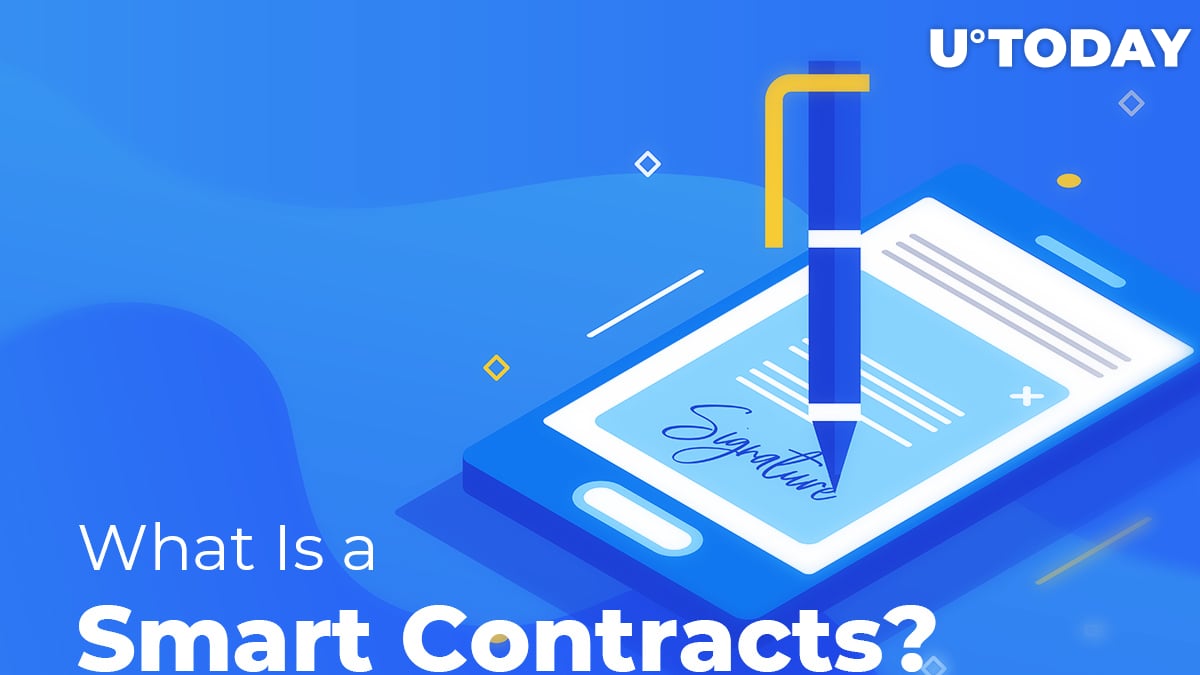 Since blockchain was invented, it has served many useful purposes, including the creation of smart contracts. This is an outstanding technology, but not so many people understand what it is, and how it functions. Are you in the dark about the idea of a smart contract blockchain? This ultimate guide is a must-read.

What is a smart contract?

25 years ago, Nick Szabo, a crypto enthusiast, discovered that decentralized ledgers might serve for the implementation of so-called digital ‘smart contracts’. These contracts exist in the form of a computer code and can run over multiple nodes. Devices controlling the blockchain could be used to supervise a smart contract. Consequently, that would facilitate transactions, fund transfers, and the delivery of services and goods.

For better understanding, you could refer to the smart contract definition given by Wikipedia. Seem too complicated? In layman’s terms, blockchain smart contracts are pieces of computer code that include certain contractual clauses that can self-execute and self-enforce. Like any other decentralized ledger, smart contracts make data totally safe – it’s impossible to forge or change. Many cryptocurrencies started implementing this technology, and the most commonly used variation is the Ethereum smart contract.

How do smart contracts work?

A smart contract does not remind one of its paper analog. Yes, it can also be applied to order services and products, perform currency exchanges, or buy/sell property. However, unlike the stacks of traditional documents, a blockchain smart contract executes itself – it comes into force automatically as soon as particular conditions are met.

If you want smart contracts blockchain explained in clearer terms, check out this use case:

To comprehend the principle of how blockchain contracts function, imagine the function of a penny-in-the-slot machine. You decide to buy a cappuccino and insert coins into the slot. Once you press the corresponding button, the machine instantly performs your order. Blockchain contracts do a similar thing. They automatically execute some actions upon particular conditions triggering them.

By their nature, smart contracts are autonomous, that is, they can work on their own or be implemented along with any number of other smart contracts. You can customize the contracts chain in such a way that the successful completion of one initiated the beginning of another. Theoretically, whole systems and organizations can work exclusively on smart contracts. Today we see the embodiment of this idea in some cryptocurrency systems, where all laws are predetermined, and therefore the network itself can function autonomously and independently.

Blockchain and smart contracts are revolutionary technologies that have brought about a myriad of opportunities and advantages. So, what exactly makes smart contracts useful for us? The list of benefits is mile-long:

1. The accuracy of data. When people handle paper contracts, there’s always a risk of human error. Smart contracts ensure the accuracy of data: the details of the terms won’t be altered by mistake. The omission of conditions can cause transaction errors, but automatic contracts exclude this risk.

3. Total transparency. Digital contracts’ details are displayed to all concerned participants. No conditions can be changed once such contract once it was activated. That excludes the threat of data forgery, and all operations are visible for concerned parties.

4. Excellent speed. Since digital contracts run their code on the Internet, they can perform transactions with an exceptional speed, which saves hours or even days for businesses.

5. It’s a paper-free process. Good news for haters of bureaucracy and lovers of nature. With smart contracts, there is no need for manual document processing. Businesses are getting more and more concerned about their environmental impact, and going digital is the easiest way to go green and cut down on paperwork.

6. Great efficiency. Due to their high cost and 100% precision, smart contracts are very efficient and can process a lot of transactions per one unit of time. Again, that eliminates the need of third parties.

7. Exceptional security. Automated digital contracts leverage the most advanced levels of encryption currently developed, and set the standard for modern cryptocurrencies. That turns smart contracts into one of the most reliable things on the web.

8. Data integrity. Since every record in smart contracts contains details about transactions, this is a great solution for data storage and backup. Once you use some information in a smart contract, it is added forever and used for further records. In case of data damage or loss, it can be retrieved in a jiffy.

10. It is trustworthy. Smart contracts are totally transparent because no information can be changed once it’s established. That excludes the risk of manipulations and errors. The parties agree to follow the contract’s rules and regulations – the rest is done by the code.

No drawbacks so far?

Like any innovation, smart contracts’ blockchain system isn’t devoid of disadvantages – the coin has two sides. Some of its benefits pose difficulties:

Smart contracts have enough potential to revolutionize many industries. Use cases are found in:

1.    Insurance. Companies automate their insurance policies by transforming them into smart contracts. Under certain events, the claims process is triggered immediately.

3.   IoT. Smart contracts help to store data obtained from devices, transfer it via the Internet, track delivery, record possession of devices, and so on.

4.   Banking. Cryptocurrency smart contracts allow for performing fast, cheap, and transparent transaction. That helps to cut back on transfer expenses.

Aside from that, smart contracts are being used in telecommunication, art, education, e-government, energy, and many other spheres.

Now with technology of smart contracts explained, you may wonder if it is being used anywhere already. Yes, smart contracts are gradually being implemented by some companies. The following examples prove that.

How do smart contracts work in particular cases?

AXA, the French airline, utilizes blockchain for flight insurance. In case of delays, users with the proprietary application are notified about compensation options. The amount of insurance and compensation depend on the triggering event.

Propy is a real estate agency that performs operations with digital contracts. It allows users to sell and purchase property offers and negotiate over them. Both parties can participate in the smart contract and buyers can reserve the properly by paying $5,000 to the escrow. Third-party payment processors can be involved to make transactions legitimate, and local authorities are present as well to make all protocols.

Populous uses digital contracts for invoice issuing. The role of technology is the elimination of risks, people’s mistakes, and document duplication. As soon as an invoice and its terms are settled in the system, users order it and transactions are performed via the digital contract.

DAO is another case in point. This project leverages the most complicated form of code – decentralized autonomous organizations. DAO serves to store and manage registries (documents, certificates, etc).

Ethereum smart contracts are the most widespread. This code was invented by Vitalik Buterin in 2013, and published two years later. Turing-complete virtual machine runs the codes: it simulates a PC using its own logic. That makes the Ethereum contract way more advanced than Bitcoin, which uses simple mechanisms for transactions.

So, what is a smart contract Ethereum? This is a code written in the Solidity language. It’s close to JavaScript, the code executed in the Ethereum virtual machine for creating contracts.

Why do companies trust Ethereum with their infrastructure?

●   It’s the most commonly used tech of its kind, the ancestor of other blockchain contracts.

●   Solidity is comprehensible and can be mastered by experienced programmers.

●   Ethereum leverages the ETH cryptocurrency, which is often used as an inner currency.

●   When it comes to the versatility of smart contracts, Ethereum is an absolute leader. It can be applied literally in any sphere without limitations.

Today, over 1,300 dApps are created or being developed on the basis of this tech.

1.    IOST (The Internet of Services) – a byproduct of Ethereum that provides tools and the environment for the creation of decentralized applications. Being built on top of the Ether blockchain, it allows for excluding intermediaries.

2.   MEvU is a decentralized P2P betting software. No matter what you stake on – Ethereum makes users confident that their wagers are totally safe. This application was created to prevent unfair gaming.

3.   CryptoKitties is one of first apps using smart contract Ethereum technology. This game allowed using digital “collectibles” stored in the blockchain – users breed their kitties using Ether tokens to run a digital contract. Sound like nothing serious, but this app has shown the potency of Buterin’s creation.

Also, let’s not forget that Ethereum has a huge network of supporters who would potentially use the smart contracts. The Enterprise Ethereum Alliance unites some Fortune 500 enterprises, such as Intel and Microsoft, as well as numerous startups.

Now that you’re aware of what are smart contracts, you can imagine how much potential there is to be fulfilled. Digital contract technology has caused a stir in the crypto community and opened a legion of possibilities for small and large companies, regardless of their specification.

Smart contracts blockchain is in its infancy: not many companies understand what it is and realize its benefits. The number of enterprises actually implementing it is even lower. However, in the following decade, we are likely to see massive leveraging of this tech in various niches.