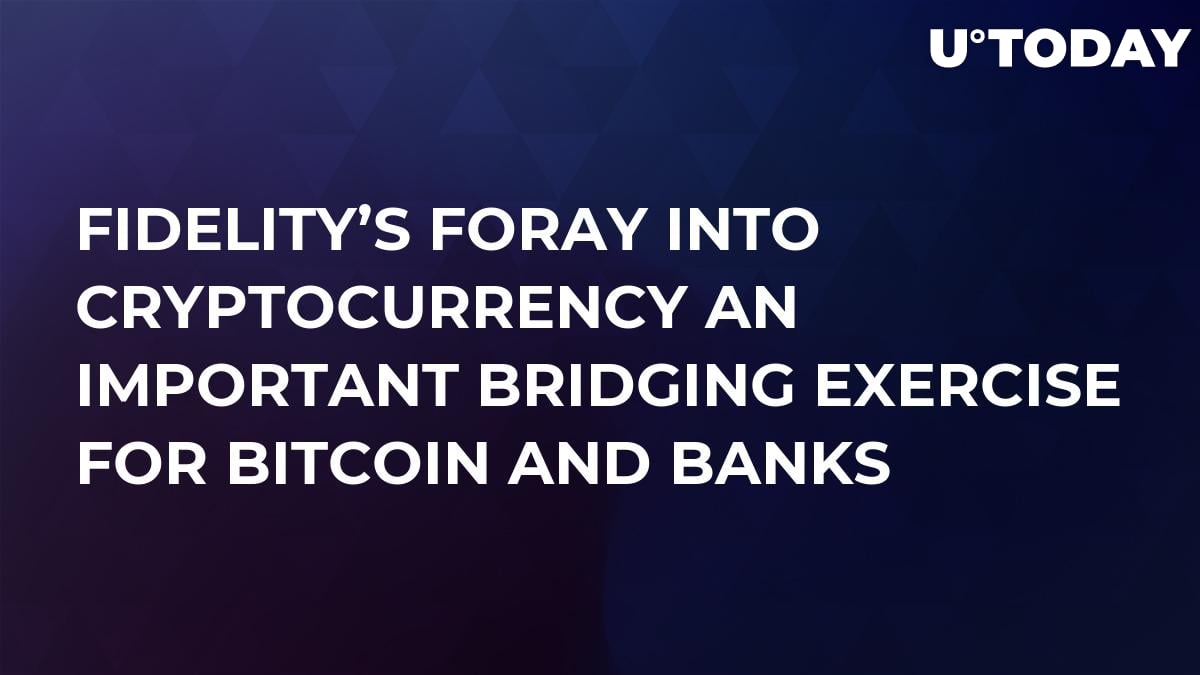 Fidelity, the financial services giant that administers more than $7.2 trillion in client assets, announced a new and separate company called Fidelity Digital Asset Services yesterday in what must be considered a major move.

In terms of adoption, the likes of Bitcoin and other major cryptocurrencies have hit a bit of a lull as the excitement of massive price spikes have abated, and there are still big barriers to entry for institutionalized investors.

But, this latest move by Fidelity is an important one as they state themselves it is about trying to entice these institutionalized investors into this new market and new asset class. Fidelity is also going after big money with this product because of a lack of regulatory clarity for the every-day investors which is another important aspect to consider.

Still, it is an unsurprising move as CEO Abigail Johnson has always been a Bitcoin believer and really it was only a matter of time before this financial giant crossed the threshold into cryptocurrencies.

What has Fidelity created?

The new company, Fidelity Digital Asset Services, will firstly handle the custody of the cryptocurrency assets of its clients. This is much the same as how companies like Coinbase and Gemini hold onto users’ cryptocurrencies.

It will also execute trades on multiple exchanges for investors such as hedge funds and family offices, but these clients will be high level and sophisticated investors for the time being as for a retail product there are still too many regulatory hurdles to get through.

In addition to storing cryptocurrencies, Fidelity Digital Assets will use an existing internal crossing engine and smart order router for trade execution. This order router will allow Fidelity institutional customers to execute trades for Bitcoin, Ether and other assets at multiple market venues.

A step towards bridging the gap

While this type of crossover from traditional financial services into the cryptocurrency space is not totally unheard of, Fidelity represents the first true Wall Street incumbent to make such a service available for traditional investors.

This is vital in Bitcoin and other major cryptocurrencies’ move to mainstream adoption as the belief is the barrier to entry for big money investors getting into cryptocurrencies is the unknown. There is a lot of money waiting to join this nascent market, but these investors are unsure of the space and how to negotiate it.

So, with a company like Fidelity offering services and a trusted name, there is a much easier path for these institutional investors to join. Many are still holding out for a Bitcoin-backed ETF to open the floodgates of new money into space, but projects like this from Fidelity are another avenue.

Driven by a believer

Part of the reason that this product has come to fruition in this way is that of the CEO of Fidelity Abigail Johnson and her belief in Bitcoin stemming back to 2014.

Fidelity has a few existing cryptocurrency projects: It started bitcoin mining in New Hampshire when the digital asset's price was around $180. It has a partnership with Coinbase that allows Fidelity customers to check their cryptocurrency balances on the Fidelity app, and in 2015, started facilitating charitable donations in Bitcoin.

“Johnson is very interested in this and stays up on developments in the space in quite a significant way,” said Tom Jessop, head of Fidelity Digital Assets.

The news has also been received well across cryptocurrency Twitter who are mostly astounded that a company that works with so much money is entering the cryptocurrency market in such a way.

The Fidelity news is huge. Don’t you see what is happening?! What an extraordinary moment in time.

Fidelity is the world's largest independent brokerage with $2.45 trillion assets under management, is going to facilitate crypto trades.

Bang! Fidelity out of the gate with a Digital asset custodian! I’ve always said we need a big name out the gate if we want institutional funds...https://t.co/HRlpZ5QSCd