CryptoTrader’s Ran NeuNer on Greed, Crypto Market Cap and Getting Off Blockchain 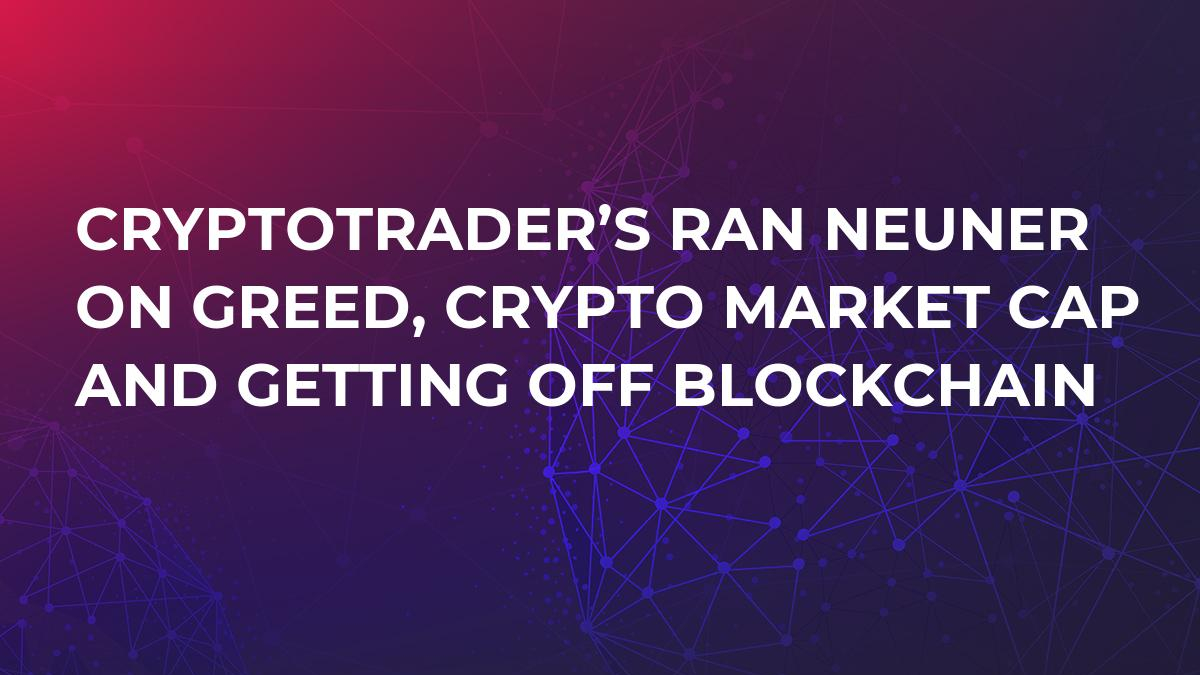 Although public interest in cryptocurrencies and Blockchain technologies has been growing steadily in the last few years, relevant coverage is rarely seen in major publications or on national broadcast networks. CryptoTrader, launched on CNBC Africa in 2017, is a vigorous exception, hosted by Ran NeuNer - a serial entrepreneur and marketing expert who is recognized as one of the most influential people in Blockchain today.

The organizers of Crypto Invest Summit, held on the first days of May in Los Angeles, planned a live taping of CryptoTrader as a special agenda highlight for the attendees of the event. Ran NeuNer’s summit guests included well-known industry influencers and experts – Jeremy Gardner, Luke Martin, David Bleznak, Ami Ben David, and Jamie Finn. CryptoComes spoke with Mr. NeuNer before the taping, as he arrived at the event with the CryptoTrader team.

The responsibility of crypto media

Katya Michaels: You have been hosting CryptoTrader on CNBC for about a year now. What do you think is the role of media in cryptocurrency and Blockchain adoption? What kind of coverage is needed in the space?

Ran NeuNer: The way I see it, a lot of the reason why Bitcoin and crypto got off to a bad start was because mainstream media was against it, reporting it as a terrorist funding operation and whatever else. If you imagine, trying to swim upstream as the mainstream media is going downstream, it's quite difficult. So as crypto media, we have to join forces to try and combat the misunderstanding of Bitcoin and crypto, to try and even out the public perception.

KM: Do you think the crypto space is also susceptible to fake news and informational distortion?

RNN: I think there's journalistic integrity that we've got to worry about.

I think before journalists post anything about any ICO or token specifically, there's due diligence that needs to be done.

Due diligence is much harder now because you don't have a company PR office that you can call and say, “hey, is this true?” Now it's a completely decentralized mechanism. So I think it's harder for crypto press people. We have to find good sources and make sure that we verify information before we report it.

KM: How have you seen the community change over time, or even since last year?

RNN: If I look at last year, the conferences were much smaller and when I walked in, I knew everyone. When I walked into this conference, I know a handful of people, which means that the people are all new and therefore, I believe that these are not the people that started off with cryptocurrency. It's becoming much more mainstream. People are buying tickets online and coming to a conference now. With the old conferences you couldn’t do that. You had to know somebody who knew someone to get a ticket.

With more mainstream adoption comes less research on technical parts of projects, and much more people that are interested only in the price. As a result, I think the market is moving accordingly.

KM: Do you think there will be a more institutional investments this year or in a few years?

KM: In terms of regulation, which side are you on? Compliance or freedom? Do you think regulation has no place in cryptocurrency and Blockchain?

RNN: I think that regulation is inevitable.

I think the sooner we get regulation, the better. It’s like a relationship – you want to know where you stand.

Where we are right now, for institutional investors – if you think of a government department or a pension fund – they can't invest in something unless they have absolute clarity that it's legal for them to invest in it. We're trying to get to the point where we're getting absolute clarity.

KM: Do you think there should be self regulation in the space?

The human factor is bigger than self regulation. We've seen it, all these ICO scams. We know that more scams that are going to cause tighter regulations. We know this, but yet the scam continues because people are not thinking as a collective. They are thinking in their individual capacity.

KM: You mentioned in February on CNBC that in terms of cryptocurrency a store of value, the game isn't even started yet – so when is it going to start?

RNN: We are so early in the game, we don't even understand how these assets work yet. We don't understand token economics very well yet. I always use the same analogy, and I'll use the analogy again: It's like we have to run a marathon and we running from the car to the start line. We're somewhere in between the car and the start line, not even at the start line yet.

KM: Do you have any predictions for Bitcoin? Is it going to stay the main attraction in crypto?

KM: Will there be another dip?

I think we will have dips along the way, but certainly the big pain is gone.

KM: What was the cause of that, what happened?

RNN: Too much mainstream, too much money coming in too quickly, too much capital flowing in too quickly. The market got overbought. What happens in an overbought cycle, it’s like a pendulum, you go back to oversold. So you catch the pendulum going the one way, it’s going to go back as fast the other way. I think now the movements are much smaller.

KM: What was the biggest insight that you got from an interview?

RNN: That aha moment… I think the biggest insight was when I discovered the Lightning Network and I was interviewing Elizabeth Stark, the founder of Lighting Labs. This was long before the Lightning Network was implemented, it was still talk. The thing that got me was that we're trying to do too much on Blockchain and we shouldn't – we should do a lot more off the chain and as little as possible on the chain.

You know, I once had an epiphany when Samsung bought a company which built battery chargers that could charge a battery within 30 seconds. While everybody else was trying to make a longer lasting battery, what Samsung said was – let's just make a battery that charges much quicker. So it's almost the same kind of epiphany when you think about the Lightning Network.

KM: Do you have any dream guests for your show that you haven't featured yet?

RNN: Because we've given him many chances to be on the show. He's declined them every time. I think now the show is bigger than him.