Cryptodiplomat: Sweden is the Next Country Where Enthusiasts Will be Doing Their Crypto Business

Cyril Gilson
The standard IPO could be done faster and cheaper with all the benefits of ICO: George #Cryptodiplomat Paliani 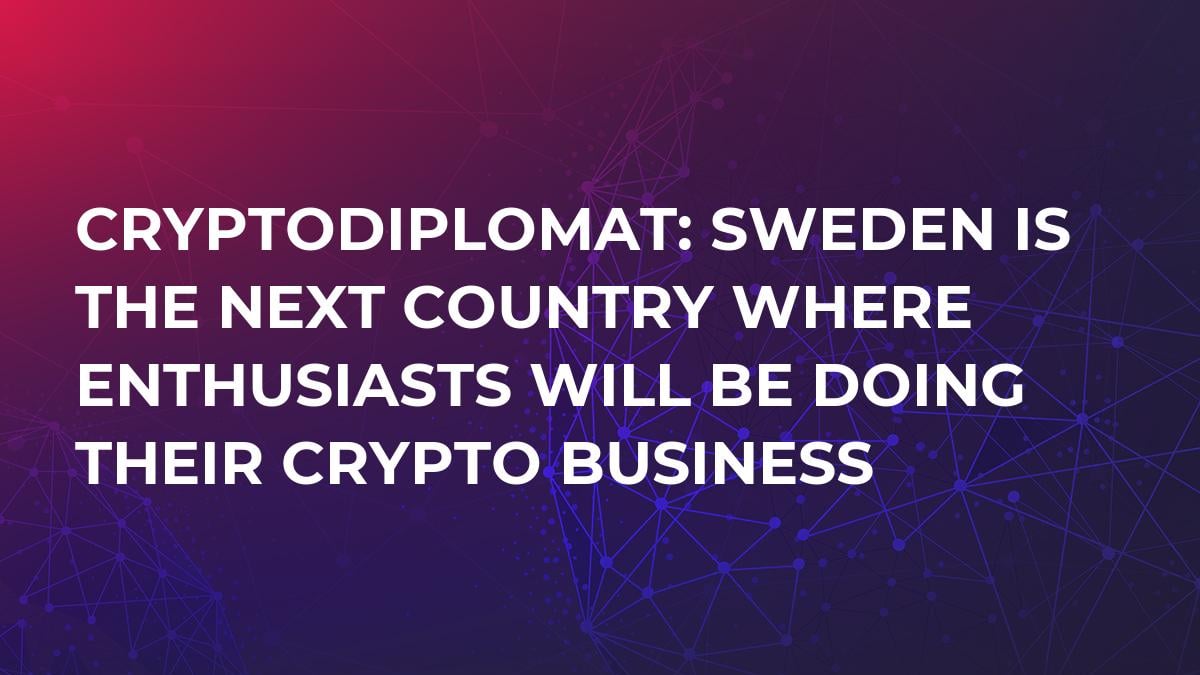 George #Cryptodiplomat Paliani is a private Blockchain consultant, advisor for several startups and speaker in many international conferences.

A former diplomat, he’s advising Zeus.exchange and Swiss Smart Valley and has his own crypto channel called Crypto Diplomat. We speak with Mr. Paliani about the future of ICOs, why they happen to fail or succeed.

CG: The ICO is becoming more like VC financing and of course VC financing also learn from ICOs, so these two currents are merging in a way. Also, one can notice that ICOs are becoming more and more expensive, so what do you think of the future of ICO at all? Would the whole approach be replaced by something else, some other type of tokenization?

GP: To my mind, there is going to be some kind of a collision, cooperation. Right now big companies are watching small startups closing their ICOs and raising funds in a more efficient and easy, fast way. Getting $10 mln in 10 seconds is not a joke right now– it is the new reality.

I am not going to argue with the fact that maybe there are only VCs mainly investing in ICOs and this new ICO wave is turning into a classical market one. ICO and IPO could be done in a hybrid way like a digitalized IPO or something similar. From my point of view, this is the nearest future, we will see that happening in just two to three years.

The standard IPO could be done in a faster, cheaper, and, what is important, legal way with the use of all the benefits that ICO has.

CG: But that would render ICOs useless if the IPOs take over in such a way.

GP: I wouldn’t say that the ICO will become useless. This could show us the third path, just as Sweden had its own original way between communism, socialism and capitalism.

The same goes here: it could be a whole new option. We have ICO from the one side, IPO from the other, and there is a third way- collaboration between these two worlds, the crypto and the classical financial one. Still, I wouldn’t say the ICO will become useless.

CG: But one of the issues with ICOs, of course, is lack of accountability before investors. So what are the ways of solving these problems? Some talk of smart money or community regulation when the community has the world, or what is your take?

GP: I think the main question you are posing here is the lack of trust, lack of escrow and some fundamentals that are in the process of building. We see this right now at the conference, in different countries and legislations, companies, etc. It is just a matter of time, first of all. The second thing is that there are already some platforms addressing these problems.

Let’s take the Smart Valley team as an example. What they do is selecting the most perspective startups and filtering off scam by getting the opinion of experienced investors and qualified business experts, checking with their analysts, gathering the information from all the accessible sources, and, finally, using so-called ‘wisdom of the crowd’. Everything is being done transparently on the platform built on Blockchain. Thus the lack of trust fades away.

It is just one of the solutions, though. Other guys are doing something like a community based on trust and a public Blockchain where people vote for ICOs. Well, it is a more complicated product, but could be an extra option too.

These institutions are forming right now, and everything is being structured. The crypto market itself is currently at the stage of formation.

Some governments are facilitating this process, others are just overcomplicating it because they cannot figure out what is Bitcoin, ICO, or whatever else that is dedicated to the cryptocurrencies. This all is just a matter of time, believe me.

CG: Another reason why ICOs fail is the internal fighting. Take the case of Tezos where the foundation and the owners of the code are at odds. What can be done with it?

GP: Nobody can be 100 percent sure that money gathered from an ICO will be distributed or managed properly.

Here is a nice Swiss example- they have a financial regulatory body which is now creating a protocol for crypto sphere and ICOs that says that after submitting and signing a certain plan it should be realized- this reminds me the core idea of smart contracts, by the way. Abu Dhabi is moving in the same direction in the regulatory aspect.

I can give you several examples of big businesses that also had such problems with the owners, investors or founders. We can recall the case of Facebook, when Mr. Zuckerberg thought he would be the only owner of the idea and later he got all those lawsuits from Winklevoss brothers. He had many more problems, but, well, that guy survived.

The main idea I wanted to share is that you cannot be 100 percent confident that any business, be it an ICO or the one functioning on the classical market will be 100 percent secure and that your investments will be safe. You know, it is business, after all. But, some people say that if you are buying Bitcoin, it is already an investment. Basically, if you are keeping some of your money in euros, this is also a type of risk hedging, it just depends on the approach you choose.

You will probably agree that a multiple signature wallet gives you a really nice opportunity to gain more security as an investor. This way cryptocurrency funds cannot be spent with only one man’s decision. But, of course, there are pros and cons here as well.

CG: But if they are locked, no one can use them.

GP: I understand this, but still, for instance, let’s talk about the corporate structure, but with Blockchain, so that any decision made by the CEO or any member of the board of directors is kept transparent and cannot be approved by CEO’s signature alone. Basically, this gives us a more secure way of building a new era- era of trust, possibilities and businesses where everything is 100 percent transparent and secure. Don’t you think it sounds really good? We are all living in that exact transition period right now.

CG: I think these problems arise because of the whole crypto industry is still under-regulated. That’s why it lacks trust and it lacks the ways of enforcement. Besides of how can we make people share the tokens properly even if in the eyes of law enforcement they don’t exist, or they exist as some strange thing, they still have a problem to deal with. But if governments will be persuaded to introduce some really strict regulations that would kill the whole idea. Or you don’t think that this perspective is possible?

GP: Frankly speaking, I am moved by the idea of anarchy inspired by a concept of free will. Although, as a guy who has studied at Humboldt University in Berlin and lived in Germany for a long time, I like everything being structured, planned and regulated. So, to my mind, there has to be decent regulation, because we cannot live in a society where business grows without any rules or laws.

My favorite concepts include balance and opportunities. As does, for example, the idea of American capitalism where a state gives you the rules and if you abide by them, everything is fine. It may not be the best example in the cryptocurrency sphere, but Switzerland, Japan or Singapore, maybe Gibraltar, Malta and Lichtenstein are good examples of countries for doing crypto business.

I think there is a high potential in Sweden. Sweden is moving towards crypto sphere at a fast pace- they are studying the experience of other governments. There is a nice guy from Swedish Parliament named Mathias Sundin who is moving the crypto idea and Blockchain business forward in a progressive manner. Sweden is the next country that young enthusiasts will be doing their crypto business. Mark my words.

CG: Well, we all hope that normal governments will find a way to thread between these two paths very unpleasant for us.