2018: Time to Replace SWIFT With Cryptocurrency?

Eric Eissler
Cryptocurrency seeks to provide a system of quick-settling payments, with low associated costs. But can they take over SWFT, the 45-year old program that is still the backbone of the international banking system? 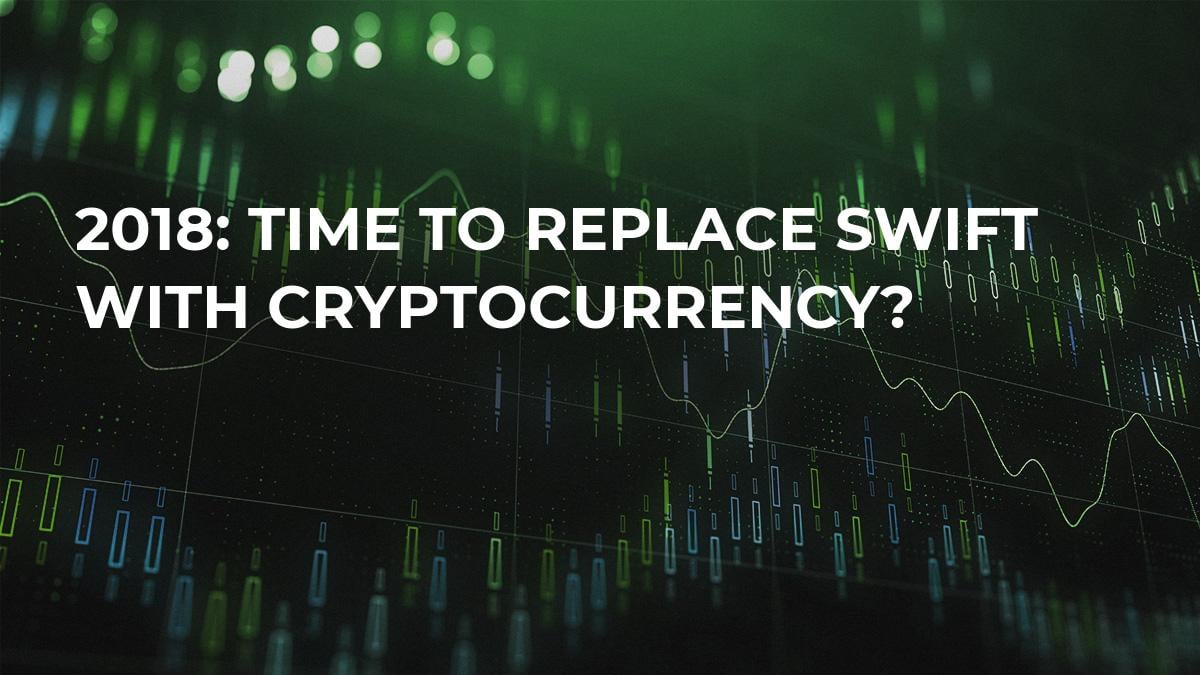 Cryptocurrency seeks to provide a system of quick-settling payments, with low associated costs. But can they take over SWFT, the 45-year old program that is still the backbone of the international banking system?

Making payments has been an age-old challenge since the dawn of human civilization, we have developed many forms of payment systems from barter and trade to gold coins and fiat money. However, most payments of the past have required two parties to physically be present to transact.

That worked well for most of the history of human civilization, sure payments took time if you were Alexander the Great trading with far-flung kingdoms, but our predecessors didn’t have all the modern conveniences that accelerated trade and business to today’s fast-paced levels.

To facilitate and meet the needs of international commerce, in 1973, the Society for Worldwide Interbank Financial Telecommunication (SWIFT) was created to help banks send money to one another.

This 45-year old program is still the backbone of the international banking system. It was recently hacked and $6 mln was stolen. This was not the first time this antiquated payment system was hacked either.

Furthermore, SWIFT is a society and to send or receive money a bank must be a member.

Membership is required because SWIFT does not facilitate funds transfer: rather, it sends payment orders, which must be settled by correspondent accounts that the institutions have with each other. Each financial institution, to exchange banking transactions, must have a banking relationship by either being a bank or affiliating itself with one to be able to transact. This is not open to the general public.

Being a member of a society to send and receive money is a pretty exclusive privilege and it excludes many people. Sure, you could always send a check, but even that is old technology and most foreign banks won’t accept checks drafted in foreign currency. Besides the US not many other countries rely on pen-and-paper technology.

Cryptocurrency seeks to provide a system of quick-settling payments, with low associated costs. That is the premise of Bitcoin and other cryptocurrencies, most of which are decentralized, while some are centralized and seek to work with banks and other institutions.

There has been a rise of other cryptocurrencies, built on newer and better technologies, which want to make payment processing their main capacity.

While the market is still young and many currencies are trying to find their footing, several standout coins have real potential, some are more well-known than others, and some are still in the shadows waiting to be recognized.

Adoption of cryptocurrency for a standardized payments system is still well off, but there has been much action in recent months as Ripple has signed testing deals with MoneyGram, American Express and Spanish bank Santander, just to name a few.

While Ripple might be used for more institutional transactions, Bitcoin and Litecoin are used for smaller payments and for sending remittances to other countries. Now that Bitcoin implemented SegWit and Lightning, the currency has regained its speed and low cost to perform transfers.

Additionally, Bitcoin ATMs have begun to spring up around the US and many people are using them to buy and sell, and send Bitcoin to other countries.

The New Year is just getting started and crypto is rising out of its current slump. Cryptocurrency has a long future ahead and its potential for revolutionizing the payments market is very bright.

However, there will be many different coins contending for the top spot in payments and it may take some time to see which coins will emerge as the main payment options. This year will be key in determining regulations, taxes and general acceptance.