Future of State: From Asgardia to AI-Ruled Space Cities

Aliya Prokofieva
To call the doctor, press "1.” To report a gas leak, press "2.” To tell the government everything you think about it, press "0" and wait 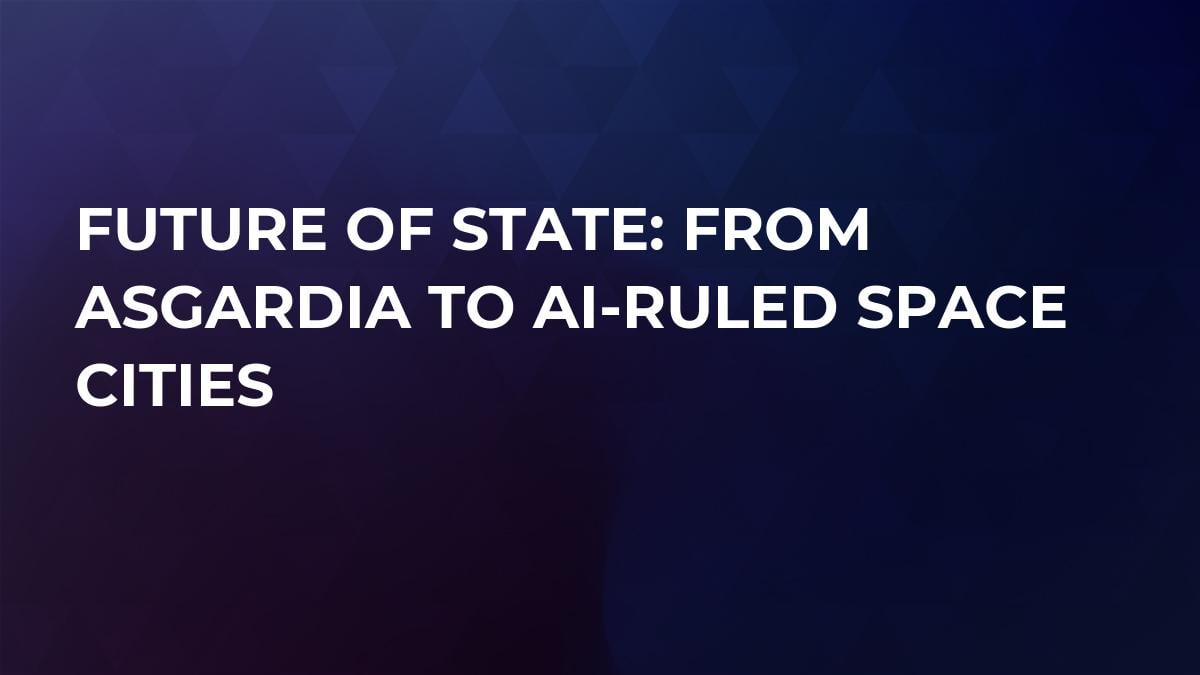 This summer in the capital of Austria, a remarkable event took place. In the warm and friendly atmosphere, the inauguration of the first head of the new state in space named Asgardia was held. The main visionary of the project, Russian scientist and businessman Igor Ashurbeyli, who founded the International Aerospace Research Center in Vienna, has become the modern reincarnation of Odin.

By Aug.10, 2018, citizenship of Asgardia has been given to 250,032 men and women (an impressive 25 percent growth for just a month). In terms of population, now the country comes as the 171st globally.

While the state exists exclusively on paper, in the future it plans to acquire its own territory, creating orbital stations and bases on other planets.

The priorities of the new world power: the peaceful development of outer space, open access to progress for all inhabitants of the Earth, and the construction of a system to protect our planet from threats from the outside.

Who needs it and why?

According to the founders of Asgardia, they are guided by the desire to gather the best minds of mankind within the framework of the state, and to help those best minds to go beyond the reach of earthly military powers and political conflicts.

The key question facing Asgardians: what to do with the territory, without which the modern state is nothing more than a fiction. There are no free land areas on Earth. Artificial islands and underwater cities in the world's oceans are not considered as an alternative- they are not only expensive but also prone to conflicts. What is left is outer space.

The choice of the founders of the new state was to create permanent settlements in space, equipped with artificial gravity and protection from all sorts of cosmic threats that will allow the human race to continue beyond its native planet and will open the door to further human settlement in outer space.

Despite the apparent utopian nature of the project, the very fact of the emergence of Asgardia shows the availability of demand for new forms of government, different from the traditional. Deep thinking people are actively looking for an opportunity to get out of state control (a vivid example is the rapid growth in the popularity of cryptocurrency).

Total reconstruction of existing systems and the creation of new entities are inevitable if we want to reduce the heat and, in the long term, completely get rid of interstate, interethnic, interreligious conflicts, without which it is difficult to imagine the modern world. To help us, we need scientific and technological progress, which will provide more opportunities for such restructuring.

Starting from this, let's try to figure out which socio-political formations will replace the existing ones in the foreseeable future.

The triumph of reason

The idea of noocracy, a state system based on the priority of the intellect, has been undergoing a theoretical break-in for several centuries. The first brick in its foundation was laid by Plato who introduced the concept of "aristocracy of the wise." In his opinion, "until the philosophers rule the states, those latter cannot get rid of the evil."

The idea caught on: it was picked up not only by visionaries (in particular, Konstantin Tsiolkovsky and Vladimir Vernadsky, who defined noocracy as a social device based on the triumph of human reason), but also the pillars of science fiction- the writers Herbert Wells and Stanislaw Lem.

The principles of building such a state system are at first glance simple and logical. People nominate representatives from their ranks with outstanding abilities, from which the ruling class is formed. The intellectual elite, having received all the power, radically accelerates scientific and technical and social progress, turning the state entrusted to it into a single territory of advanced development. Everyone is pleased, everyone is happy.

But this is only at first glance. There are weak points and blind spots in this theory of the new world order. The theory skips the notion that "smart" and "good" are by no means synonymous. Despite the attractiveness of the Russian poet Alexander Pushkin's axiom that the genius and villainy are incompatible, all history of mankind has repeatedly proved the opposite. In addition, if the level of intellectual development could be defined quite accurately (IQ tests to help you), then the moral qualities of the individual do not lend themselves to such simple identification. Therefore, making a bet solely on the intellect, mankind risks hanging on the thread of rulers albeit brilliant, but immoral and unprincipled.

IQ test for the rulers is not at all necessary. The main and most important thing is that a ruler should be a good person.

Related
The Singularity Known for Sofia the Robot is Coming: Past-ICO Review

The machine of the state

Cyberocracy is another probable path to the development of civilization, a natural continuation of the stage of the information society that we are going through today. The determining factors in the formation of such a system of government are the speed of information dissemination and its general availability.

At the first stage, there is a system of data collection, sorting and redirection operating on a national scale. Any signal received in it in real time is sent to that subsystem of the state machine, which must respond to it. At the heart of it is the principle of the cellular autoresponder operation, built in the core.

To call the doctor, press "1.” To report a gas leak, press "2.” To tell the government everything that you think about it, press "0" and wait.

At the second stage of the development of the cyberocratic society is the participation of a person in management activities being minimized or eliminated altogether. A universal system of algorithms is created, which provides an adequate response to any request received in it. Would you like to get married? Type the word "wedding,” wait for the answer, confirm your decision with a one-time password. Done: Citizen X and citizen Y are declared husband and wife. From the loudspeakers of the iPhone 18 Mendelssohn's march flows, a bottle of chilled champagne appears in the receiving chamber of the delivery system. May you live happily ever after.

The advantages of such a system are more than enough. It is absolutely transparent and predictable. Any problem is solved in real time. By eliminating the human factor from the control system, the bureaucracy ceases to exist as a class.

As for the disadvantages, paradoxically, the same absence of the human factor applies. Algorithms are impartial: they can not "get into position," they do not know the concepts of "compassion" and "empathy." Maybe it's right, but somehow it's not human.

The highest form of dehumanization of the administrative apparatus is the autocracy of artificial intelligence. By this bug, anti-utopians scare humanity for more than a decade, and we must admit that it is not without reason.

One of the key characteristics of artificial intelligence is the ability to improve oneself. In the same lies the main danger: by giving AI such an opportunity, humanity as a matter of fact voluntarily renounces control over it. A self-improving system sooner or later will find how to circumvent or destroy any restrictions and protective mechanisms and begin to dispose of the destinies of civilization exclusively at its own discretion.

All that is next is from the field of assumptions. Perhaps artificial intelligence will refuse to usurp power and will be satisfied with the role of an ancillary worker. It is possible that having achieved absolute superiority over the human mind, it will find a fundamentally new way of development of terrestrial civilization and lead us through it into the world of total prosperity. And maybe AI will find the human race a nuisance to the system of the universe with all the consequences...

The taste and color

Another utopian, but very curious concept of the future world order is the formation of a multisystem of virtual states that are not tied to a particular territory. Any person, regardless of place of residence, is provided with an assortment minimum of several sets of rights and duties. Among them, one chooses the one that most closely matches his personal value system.

One of the advantages of such a system is the freedom of choice, which no other public order gives. The shortcoming is this: the voluntary choice of citizenship implies the possibility of its still voluntary change. So many will move from camp to the camp, guided by momentary reasons. For instance, the material benefit: as long as I have a low salary, I will be a citizen of the State X. As soon as I grow up, I will move to the state Y: over there, I’m told, taxes are lower. A particularly exalted person can begin to change their nationality almost every day, depending on their mood or to match its flag with the color of their dress. Such "freedom" disavows the very idea of statehood: a penny of citizenship, which can be changed at the drop of a hat.

Another situation. Imagine a family where the grandmother is a constitutional monarchy, the father and mother are convinced techno-democrats, and the younger generation are citizens of the commune of anarchists. This explosive mixture will almost certainly lead to inter-state conflicts within a single family! Not far from military operations with the use of hybrid ammunition (breaking dishes) and torture of prisoners of war (flogging). No matter which way you look at it, how the Geneva Convention should be amended?

Let's sum up. The basic law of dialectics asserts that form and content are essentially the ones. Consequently, behind the fundamental shifts that are taking place today in the content of social relations, the rapid development of new forms of organization corresponding to the changing realities will inevitably follow. We need more states good and different!

And Asgardia is only the first swallow. Or is it the Valkyrie?

Related
Trust in Crypto Space and the Next Tackle
#Asgardia News