The BIS Lambasts Bitcoin in Report, Calls Out ‘Range of Shortcomings’ 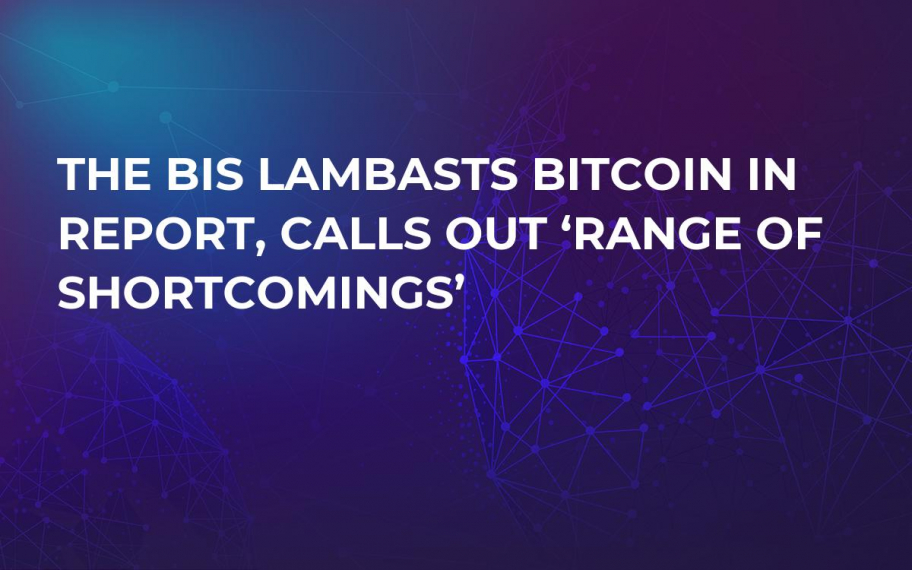 The BIS, the Bank of International Settlements, believes that Bitcoin and the rest of the cryptocurrency market are not ready to be a major financial service, and may never be.

In a 24-page report, the Basel-based bank listed a number of shortcomings that Bitcoin possesses that is slowing its progression. From electricity expenses to scaling and the persistent hacks of the ecosystem, the BIS has not got many positives for the decentralized money system.

The BIS is an 88-year-old institution that operates as a central bank for other central banks in many respects. It addressed the Bitcoin phenomenon in its annual economic report with the gist stating that it suffered from a range of shortcomings that would prevent cryptocurrencies from ever fulfilling the lofty expectations that prompted an explosion of interest and investment in the asset class.

The BIS went after the decentralized nature of Bitcoin as a flaw of the system, rather than a massive strength that it is touted to be. They also said Blockchain would not be a viable technology for retail transactions as the swell of the Blockchains with added adoption overwhelm everything from individual smartphones to servers.

“The associated communication volumes could bring the Internet to a halt,” the report said

The report also delved into the large operating costs of mining cryptocurrencies globally, an issue which is contentious in many circles. It is determined that the mining impact of Bitcoin and cryptocurrencies is on the same level as the country of Switzerland.

“Put in the simplest terms, the quest for decentralized trust has quickly become an environmental disaster,” they said.

The BIS went on to bring up the consistent hacks that are plaguing the cryptocurrency market currently and how they are having an effect on the price of the assets, as well as the user sentiment.

However, the BIS was more complimentary of Blockchain over Bitcoin, another narrative that institutions are trying to separate, leaving the technology attached to cryptocurrencies separate from the actual Blockchain.

The BIS feels that Blockchain is a great breakthrough but feels that it can also be risky to try and build a global economy on it.

“Trust can evaporate at any time because of the fragility of the decentralized consensus through which transactions are recorded,” the report concluded. “Not only does this call into question the finality of individual payments, it also means that a cryptocurrency can simply stop functioning, resulting in a complete loss of value.”