Past ICO Review: Qtum Wants to be Ether, But it’s Built on Bitcoin 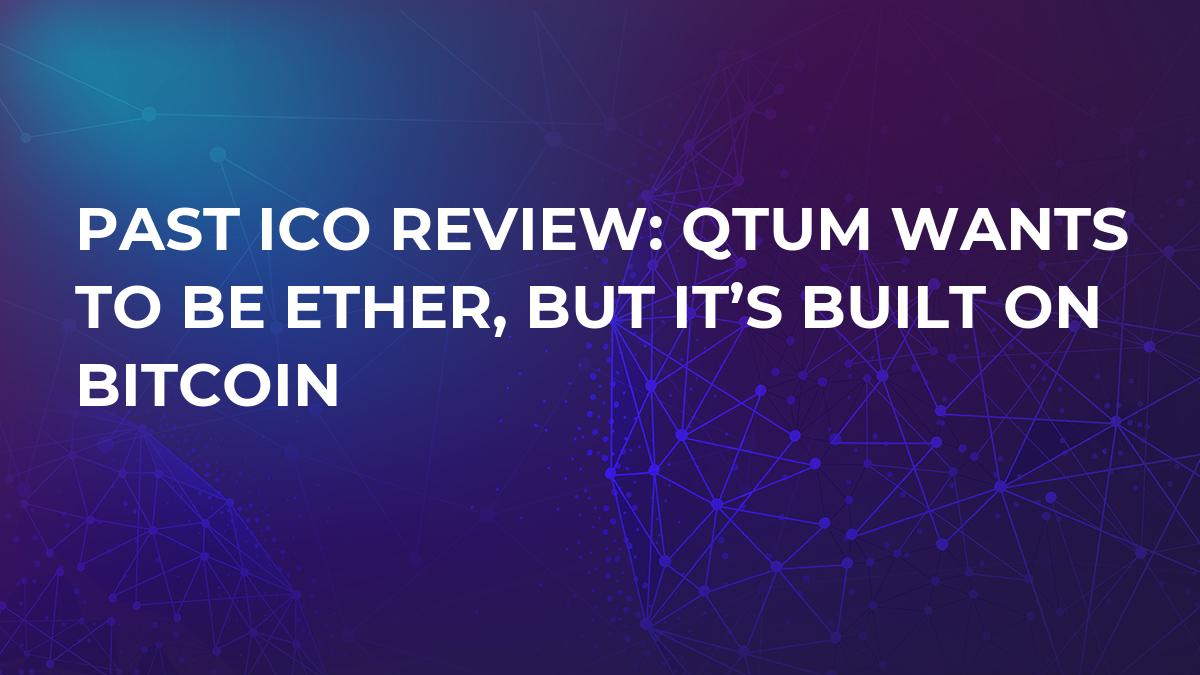 Throughout the many Past ICO Reviews, a common trend has emerged: many tokens are ERC20, which are built on the Ether Blockchain. This should not come as a surprise because many innovative Blockchains with tokens want to do something more than be a payment-services solution. To do that, smart contracts come into play and Ethereum is the smart contract’s king. So it is no surprise why so many companies build on Ethereum.

What is surprising is that Qtum is not an ERC20. It is built on Bitcoin’s unspent transaction output (UTXO) transaction model combined with a proof-of-stake consensus model. The developers stated that these elements of the Blockchain make it better suited for business-enterprise systems.

Qtum entered the cryptocurrency market early in 2017 with a March ICO that raised $15 mln. While it seems small compared to what has been raised over the past six to nine months, it was the fourth biggest ICO in terms of funds raised at that time in March 2017. Token prices debuted at $6.40 in March 2017 and at the time of writing are up 202 percent to $19.34. CoinMarketCap has it ranked at 18.

But now comes the questions that every cryptocurrency fears to hear: what is it good for? What can it do?

One of the primary goals of Qtum is to be able to bridge the Bitcoin and the Ethereum world. What makes the software unique is that Qtum’s core technology combines a fork of Bitcoin Core, an Account Abstraction Layer allowing for multiple Virtual Machines, including the Ethereum Virtual Machine and Proof-of-Stake consensus aimed at tackling industry use cases.

Qtum has 21 Dapps on its page that are either working or a prototype. Many of them are their own coins and platforms such as Energo, which is built to measure and regulate clean energy produced within local microgrids- this model empowers consumers and allows community members to directly exchange energy in a system unburdened by the constraints of a traditional grid.

Designed with stability, modularity and interoperability in mind, Qtum is a toolkit for building trusted decentralized applications, suited for real-world, business oriented use cases. Its hybrid nature, in combination with a first-of-its-kind PoS consensus protocol, allows Qtum applications to be compatible with major Blockchain ecosystems while providing native support for mobile devices and IoT appliances.

Patrick Dai graduated from Draper University and was previously employed by Alibaba.
Neil Mahi has 20 years experience developing software and has four years experience in the Blockchain space.
Jordan Earls has been developing software since he was thirteen. Jordan has reviewed over 100 altcoins and identified multiple exploits in coins.
Patrick Dai, Qtum Project co-founder, said that Qtum intends to become a smart contracts platform for business. The Qtum project will make it easier for companies and industries to develop practical applications on top of Qtum. The project envisions a future consisting of automated business practices and seamless machine-to-machine communication. In March 2017, it was announced that PriceWaterHouseCoopers (PwC) would partner with Qtum.  “Having PwC, which has broad expertise across industries and a global network, support Qtum will help us fulfill our mission,” said Dai. Furthermore, the hybrid nature of Qtum will allow it to interact with Ethereum- and Bitcoin-based Blockchains for better compatibility capitalization.
card