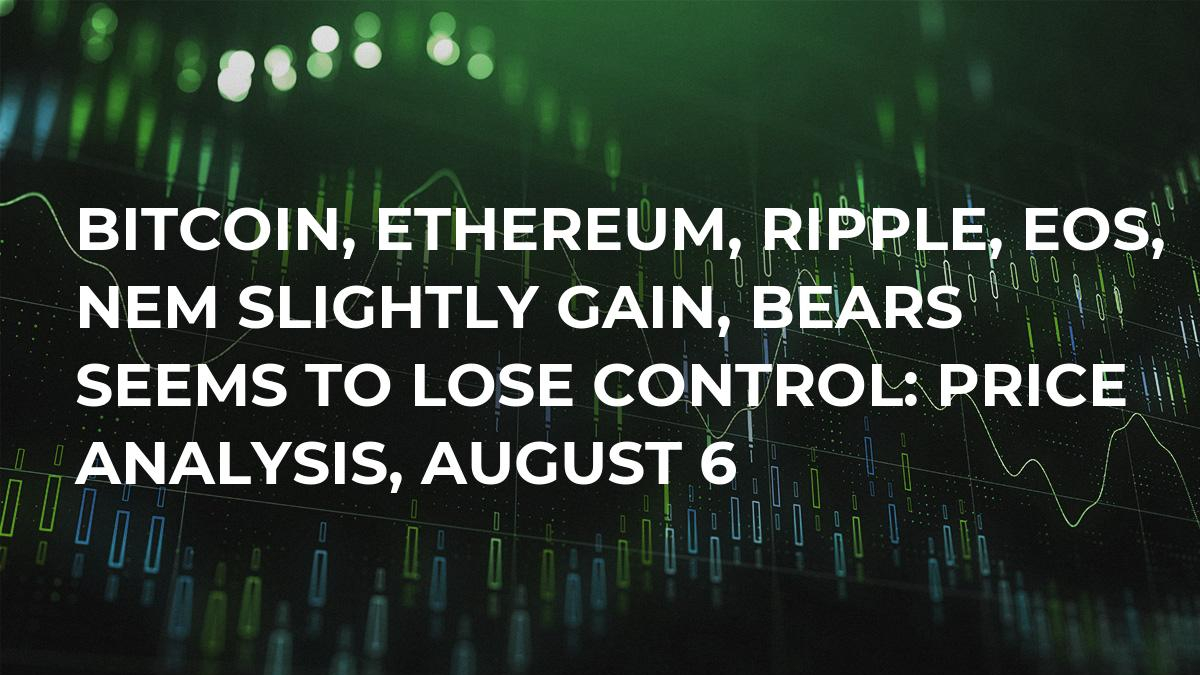 Hello, this is Andrew Strogoff again and we are going to dive into Bitcoin and altcoins price analysis again. Looking through charts and events I am wondering what the hell is going on with the crypto market.

I have carefully studied everything that has happened in the past week and found nothing that could help me to understand the reason for such a significant decline. The price seems to live its own life separately from fundamental analysis.

There is nothing important that could affect the quotes and lead to such a huge downtrend. I personally think that this decline is due to the lack of interest from investors. It is summer time and most of them have fixed their positions in order to spend some money on holidays.

As for news, I have some interesting events to give you. The first one comes from the US. North Carolina has prohibited to donate in cryptos for political purposes meaning the candidates are not allowed to take contributions in Bitcoin, e.g.

Bitcoin and altcoins cannot be considered as money according to the Dutch central bank. This is a strange decision. However, there are no plans to ban cryptocurrencies neither to restrict their implementation.

Bitcoin has added more than one percent in the past 24 hours. However, the currency pair has lost nearly 13 percent in the past seven days meaning we are still within the downtrend stage. BTC/USD had a significant decline during the past week and now this downtrend is stopped due to some technical reasons. 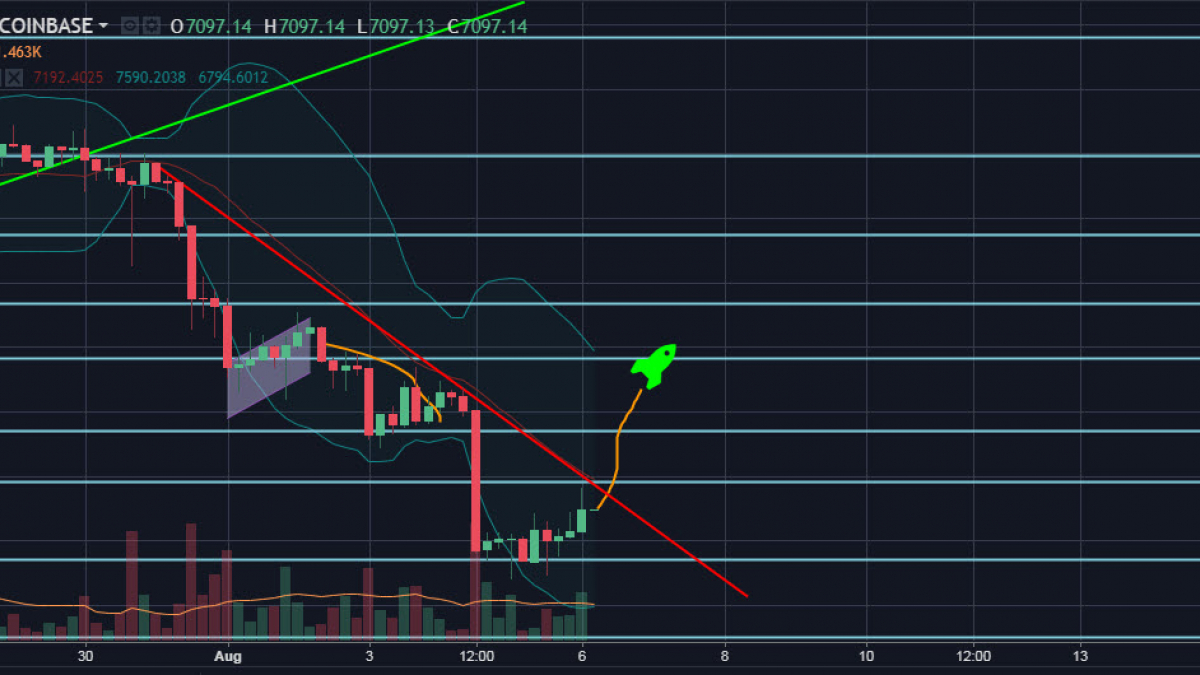 Bitcoin is trading below the red descending trend line meaning we are still in a downtrend. However, the currency pair has reached the support area at $6,943 and stopped there. Bears seem to be tired and need some rest while bulls are full of power and they are ready to counterattack.

BTC price is close to the resistance area at $7,181 currently and I think BTC/USD is going to test this level in the nearest future. My main scenario for the next 24 hours is bullish as I think buyers are able to develop this upside correction at least.

I have set the targets higher at the resistance area at $7,565. To reach those targets, Bitcoin will have to pass a couple of resistance areas. However, if bears come into play again, they will be able to push Bitcoin even lower, below the current support at $6,943.

Ethereum (ETH/USD) downtrend is over

Ethereum has added more than one percent in the past 24 hours meaning the downtrend is paused at least. However, the currency pair has lost over 11 percent within the last week and established a strong downside tendency. 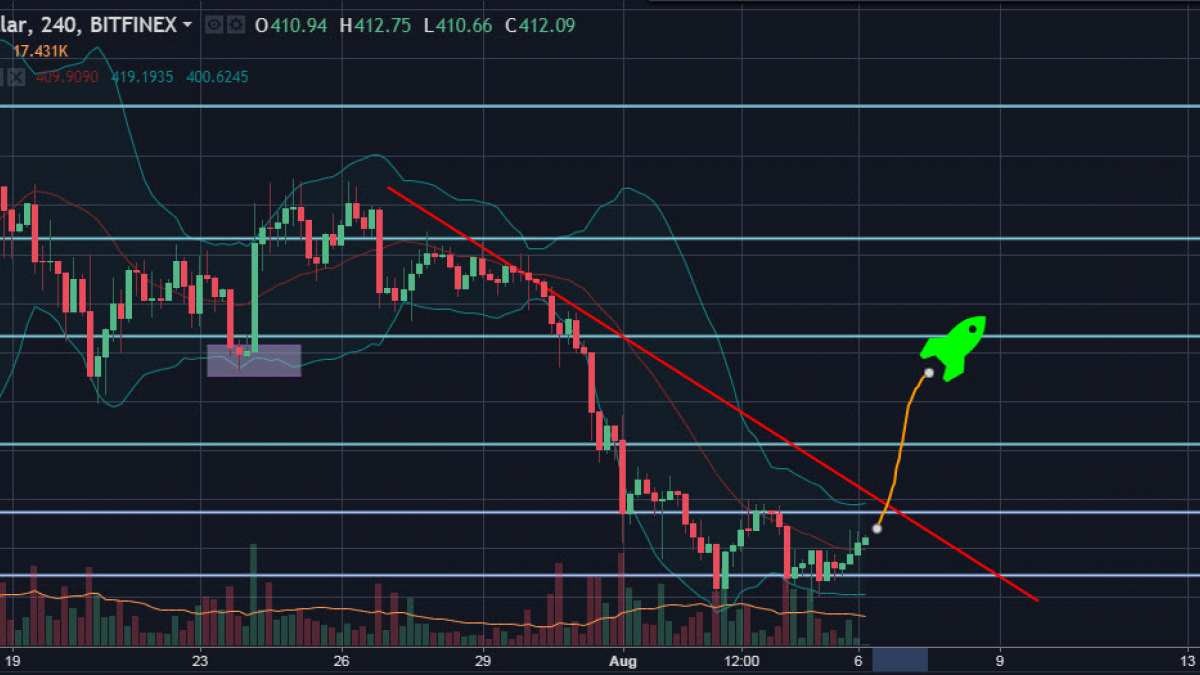 I can see some signs of reverse on the four-hour chart currently. The first one comes from graphic analysis. We have a double bottom pattern as the price has tested the support area at $404.55 twice and failed to break through.

We are below the descending red trend line currently, but Ethereum tries to fill the gap between its current position and this trend line. ETH/USD is close to the next resistance area at $417.28 and I think the currency pair is able to reach it in the nearest future.

I have set my target at $453.24. I think that Ethereum is able to reach this area in the next couple of days. Bears are exhausted and bulls seem to take control. However, if buyers are unable to pass this red trend line or the closest resistance area, they will be discarded to the support area by sellers.

Ripple is one of the most resistible cryptocurrency from the top 20 as its losses for the past seven days are less than five percent. The currency pair has no tendency currently as it stays within the range. XRP/USD looks promising currently and I think it is going to reach my targets in the nearest future. 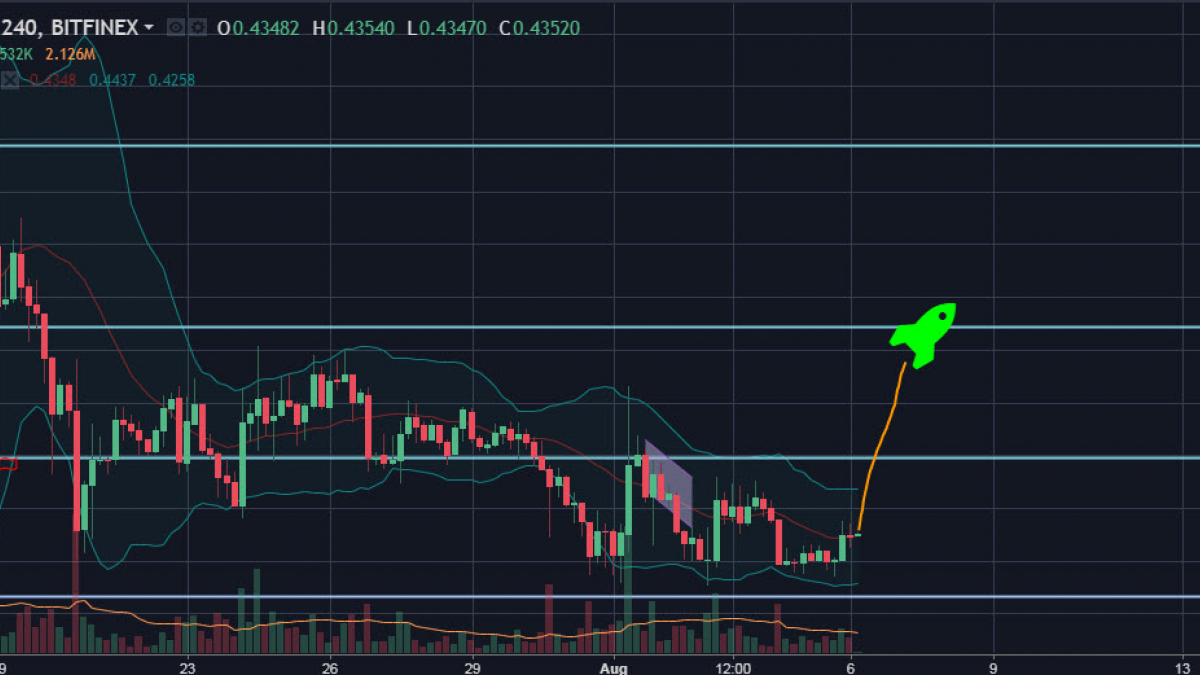 The currency pair has reached the support area at $0.4232 last week but failed to go lower. We have a clear flat situation and I can see that Bollinger Bands indicators have no direction currently. XRP price is close to its red middle curve and is ready to test it. If bulls succeed, they will be able to go further targeting the closest resistance area at $0.4495.

I have set my targets even higher as I think that XRP/USD is going to develop the uptrend in the nearest future, aiming $0.4744 this week. However, bears may counterattack at $0.4495 and retake control.

EOS has lost more than 13 percent in the past seven days but the currency pair seems to start a correction currently. EOS/USD is flatting for a couple of days meaning bears are exhausted. I think that EOS is likely to start the uptrend but there are some obstacles along the way. 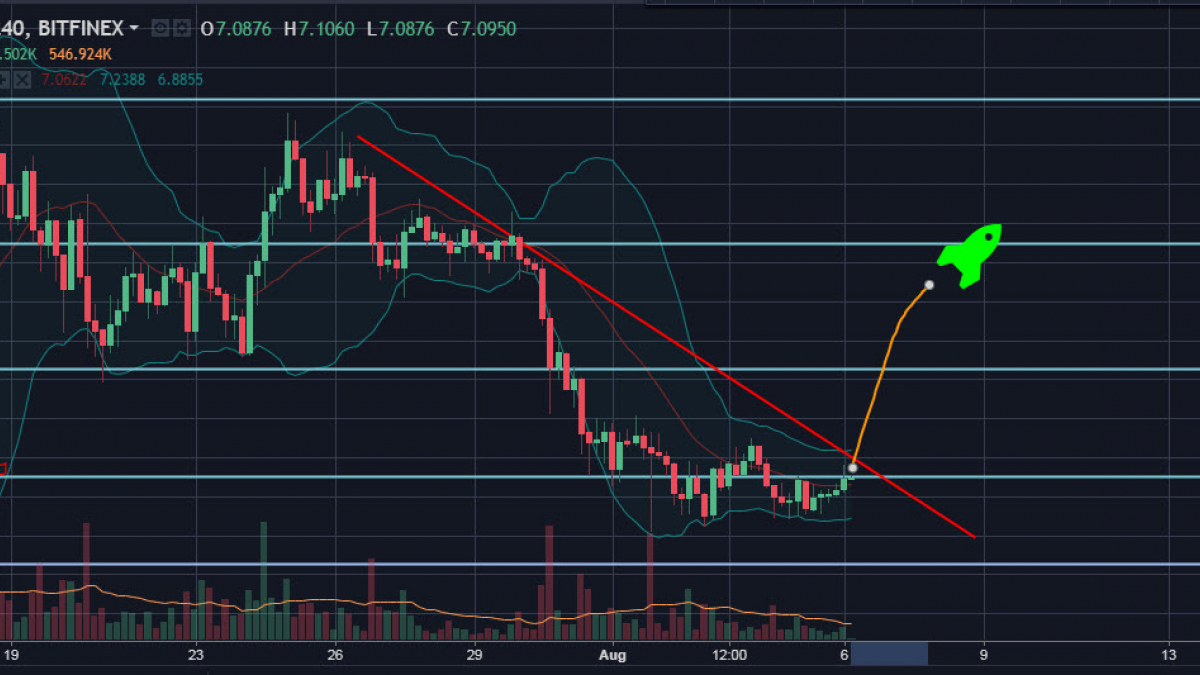 EOS is trading below the red descending trend line meaning the currency pair is still in the downtrend. However, I think it is going to test the line in the nearest future. If bulls succeed, they will have an opportunity to drive the currency pair higher targeting the resistance area at $7.65.

EOS/USD is currently testing the resistance at $7.10. Bears seem to lose they control over the market but they may regain it at any moment as buyers are cautious currently. My scenario remains bullish, but if bears counterattack, they will be able to push EOS/USD even lower towards the support area at $6.65.

NEM (XEM/USD) correction is on the way

NEM declined significantly last week. The currency pair has lost more than 16 percent in the past seven days. However, it seems like bears are too tired currently as they are unable to push it lower. I think that it is correction time and bulls are going to gain control over the market. 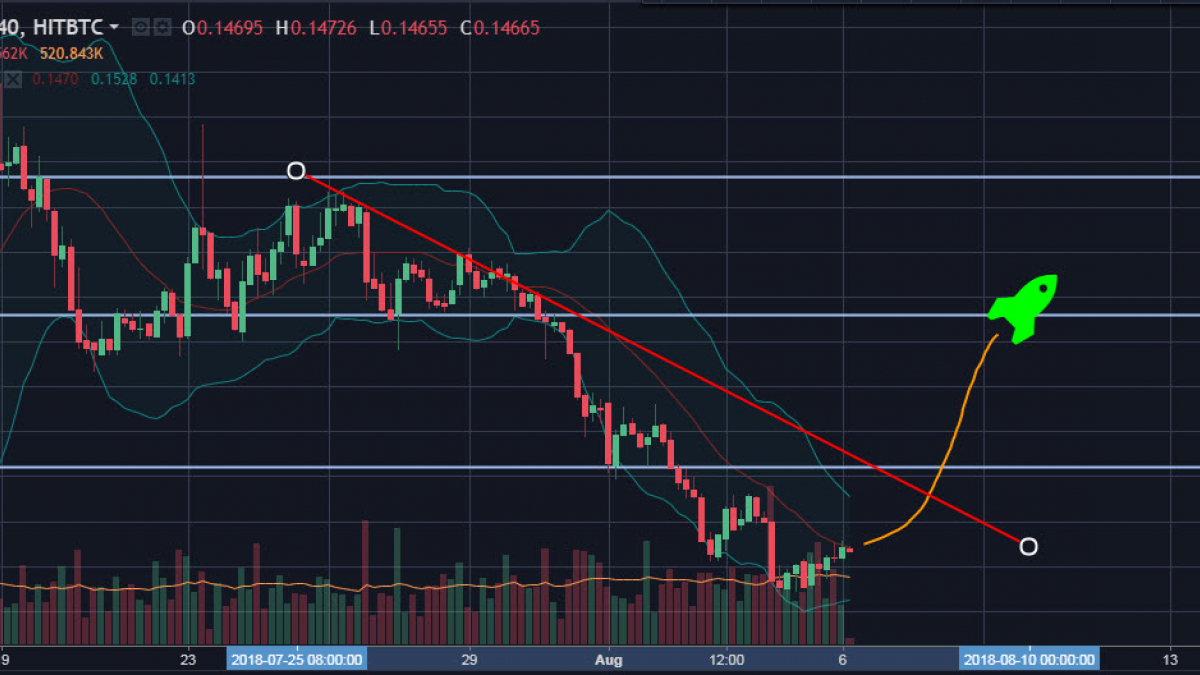 NEM is trading below the red descending trend line currently but the currency pair looks promising as it is trying to fill the gap between the current price and the trend line. XEM/USD has reached the lower curve of the Bollinger Bands indicator and is moving towards its middle line currently. I think it is going to reach the higher line and then the resistance area at $0.1561 on Tuesday.

My targets for XEM/USD are even higher as I think the currency pair is going to reach $0.1729 this week. However, if bears regain control, they will be able to push the currency pair even lower establishing new dips.