Dmitry Cake
Enough or not enough? That is the question. Correction may continue as Bitcoin is in no hurry to bounce back. 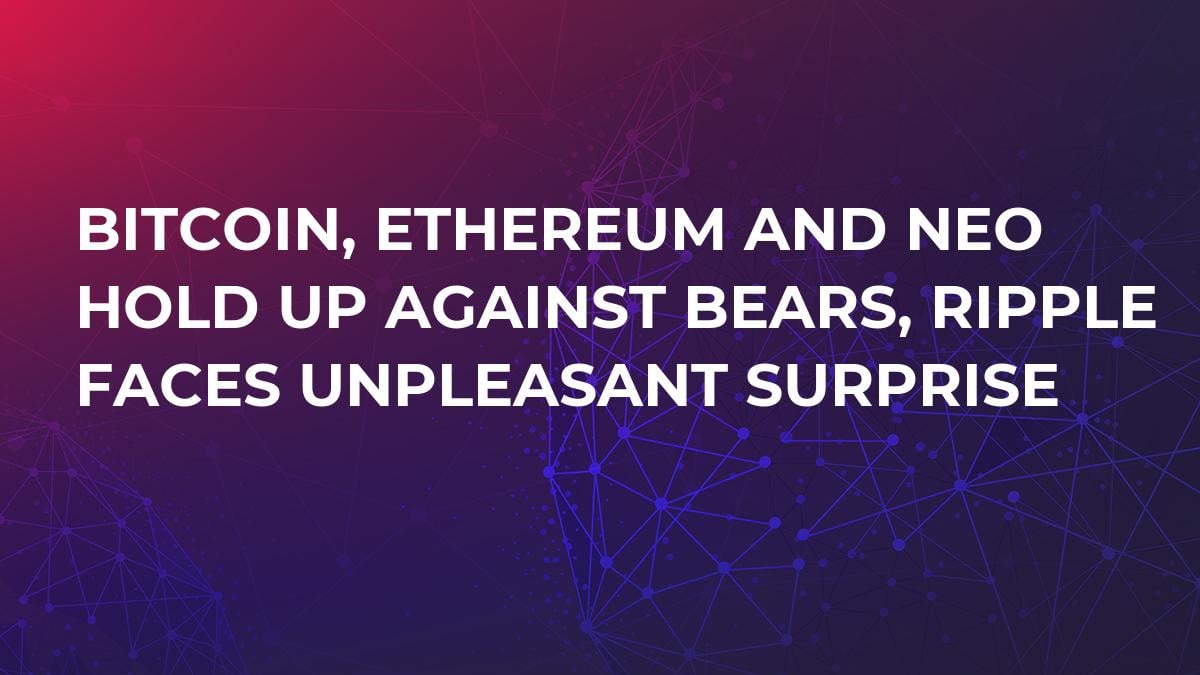 Yesterday’s correction did not come as a surprise to us - nor, hopefully, to our readers, nor, it seems, to most market players. Bulls and bears have been preparing for this event in advance - there was no panic or haste in their actions, and behavior of most asset prices was predictable.

Now, when the technical indicators have “cooled,” and the overbuying of coins subsided, upward movement can continue inside the global growth trend which has maintained its boundaries. This is what buyers expected - but could it be that the market has no surprises in store?

EOS and Bitcoin Cash look better than the market

As a result of today’s events, capitalization was once again thrown beyond the  $400 bln mark, which has become the Rubicon dividing global growth and market decline. With few exceptions, all positions are in negative territory, with losses of 8 percent for Bitcoin, and 9 to 12 percent for altcoins.

EOS is looking better than the market, becoming the most “hyped” asset of the month - its price fell only by 2.8 percent. Interestingly, this is echoed by Bitcoin Cash, whose crazy rally did not end in catastrophe. It seems that the patrons of the coin are seriously intent on proving to the market that Bitcoin's main rival is not an empty prospect.

At the moment, Bitcoin’s minimum price since the beginning of the correction was $8,670 - that is, the decline stopped between the first and the second goal, of which we spoke yesterday. Next, we see two possibilities of development.

Given the shape of the last four-hour candle (hammer pattern), it can be assumed that the next candle will be green. In that case, we will expect growth at least to $9,050, and then, possibly, to $9,200. After that, it would be good to test the upper green channel and if it holds, to begin recovery. This scenario seems the most logical.

But who says that manipulators (who have repeatedly revealed themselves during the past two weeks) will allow events to unfold as they are expected to? For this eventuality, we have prepared a scenario with lateral trading inside the wedge either above or below the boundary of the green channel, the formation of a figure similar to “head and shoulders,” a breakthrough at point 1, testing of the 0.382 level of the Fibonacci retracement, and finally an arrival at our second target, $8,400. The next few hours will tell where the price will move and whether correction will continue.

In Ethereum trading, events took a rather dramatic turn. On one hand, we have to give their due to the buyers who were able to keep the asset inside the growth channel which, given its steep incline, was not an easy task.

Judging by the above average trade volumes, investors need Ethereum alive and well.

On the other hand, despite all efforts, the price is still rather close to the boundary of the channel, and to make it worse, below the 0.236 Fibonacci level, which is an additional resistance.

With an eye on Bitcoin, which is hesitating with some indecision, we are betting on a break through the channel. Further, the most likely scenario would be a testing of the previous local minimums at the $600 mark first, and then a descent to the 0.382 value of the Fibonacci grid, which coincides with a strong mirror level of $575.

In case of stronger negativity, we allow a further decline to the next target of the bears - $535, but this is unlikely for now. If the market does provide such an opportunity, it would be a waste not to take advantage and grow long positions in Ethereum at an attractive price.

Unlike Ethereum, NEO has already fallen out of all possible channels (even the exotic curved one). Before a full recovery, the asset will have to overcome the $75 mark, which is where the resistance is now. Although, this will become a problem only in case of a prolonged lateral movement by Bitcoin.

Potential areas of further decline in case of negative developments are  $69 - at the level of previous lows - and then $64, which coincides with the mirror level and the 0.5 value of Fibonacci retracement.

Near the second goal lies the boundary of the long-term descending channel, the breaking of which will be actively resisted by buyers with a likelihood approaching 100 percent. Let’s not forget about the $60 mark, important for NEO, but for now such success for the bears does not look realistic.

We saved the Ripple chart for dessert. With just one glance, the eye is drawn to the red candle with a huge lower shadow reaching to $0.50. This is how the collection of stop-losses looks on the Bitfinex exchange. When a protective order for a substantial sum is triggered and there is no nearby purchase order for a similar volume of assets, the price gets dragged down, catching other stop-losses in a chain reaction. This continues until the snowball is shattered against the impassable buy wall, which in the case of Ripple was exactly at $ 0.50, and then bounces back almost to initial values.

Interestingly, this pattern is not repeated on other stock exchanges - it is more typical for Bitfinex. However, let’s leave the shortcomings of algorithms on the conscience of Bitfinex developers.

For us, this means that a big player has left Ripple and is not going to defend his position. On the other hand, despite these events, prices barely decreased, which indicates that other players are gaining interest in the asset.

The nearest resistance for Ripple is at $0.85, and it will be difficult to overcome without a general positive atmosphere. As for possible targets for further correction, they are represented by the set of $0.77 (again), then $0.73 - 0.75 (the boundary of the ascending channel) and, finally, $0.71. We believe that the latter will be reached only in the context a strong negative development in the market.