No Reversal for BTC, No Love for LTC and XRP, but XMR is Looking Good

Dmitry Cake
The middle of the week brings no relief to Bitcoin and most other top crypto assets. But buyers’ focus is Monero 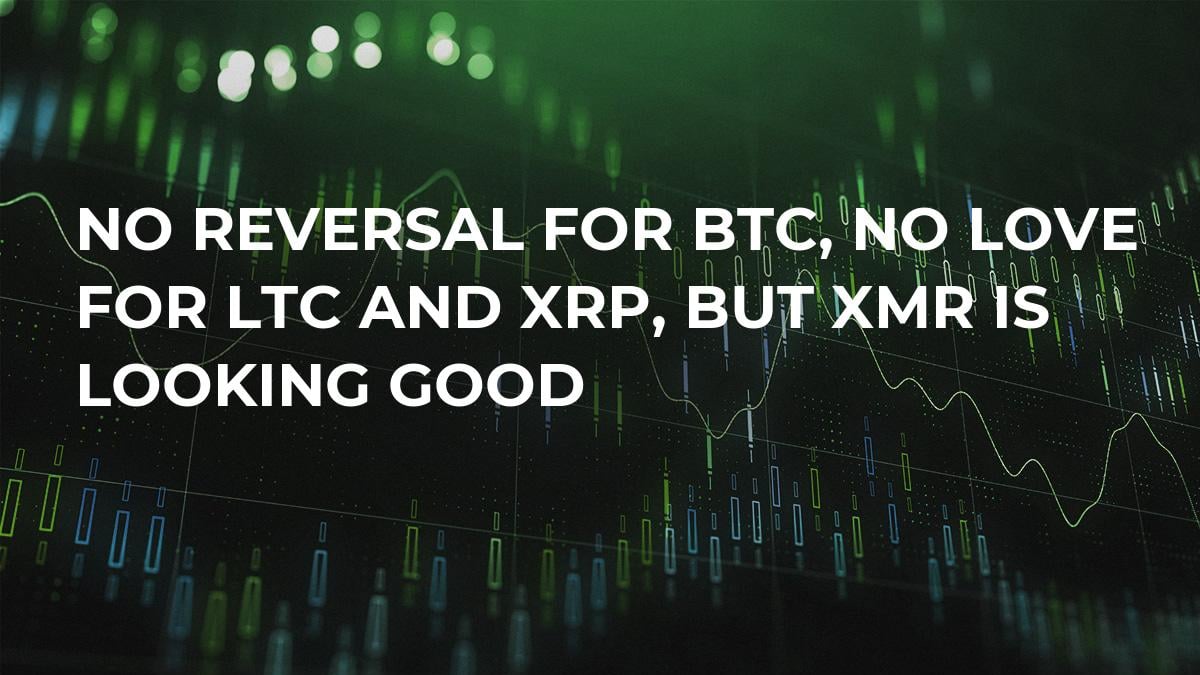 The middle of the week has passed, but the market is still undecided on the direction of further movement. Once again, we see a tendency of declining trading volumes, although some assets are behaving abnormally, as we will discuss below. It seems that the players are expecting some kind of call to action, but it won’t appear out of nowhere — either bull or bears will have to take the initiative.

For the third day in a row, the total capitalization of all crypto assets is fluctuating around $300 bln. Some altcoins continue growing — just in the first hundred coins, there are five that have gained more than 20 percent in 24 hours.

Overall, about half of the top 100 assets are green by the end of Wednesday. Bitcoin dominance is still 45 percent, supported by a slow but steady squeezing of juices from assets with the highest capitalization.

Our indications for Bitcoin remain relevant, but several new elements have emerged. First, at the beginning of Wednesday, the price finished forming a bullish wedge. The price’s exit upward from the figure was accompanied by a significant increase in trading volumes. As a result, the price reached $8,100, and the bulls were already reaching for champagne - but the maneuver turned out to be false, once again.

After some fluctuation, everything returned to normal, namely - the level of $7,850, a sort of magnet for the last few days. Yes, we see long shadows on hourly candles, and yes, price lows are in no hurry to be updated, but the fact remains - there are no clear signs for reversal yet.

The key support for BTC remains the same - it’s the level of $7,600 - $7,660. Our recommendation to buy the asset at these prices with a short stop-loss remains in force.

Litecoin just can’t please investors, and no reasons for joy are foreseeable in the future. At the time of writing the asset is traded at $130, huddling near the support line and clearly trying to fall one level lower. The level of $125, which we wrote about yesterday, received another confirmation - if the rate of decline remains the same, it will coincide with the boundary of the mirror level, to which the price was sensitive as early as December 2017 (marked by an orange line).

In the case the "support" is broken, the bears’ goal of $115 is still relevant. Of course, such a decrease is possible only in case of negative Bitcoin influence, since the news of LitePay failure has already played out and no longer puts pressure on the asset. We will periodically return to the analysis Litecoin price, but more out of respect for one of the oldest altcoins.

Monero is still clearly following along the parabolic trajectory that we indicated yesterday. There are almost no long red candles, while buyers showed themselves in full force yesterday. We see a huge purchase volume, confirming the interest of investors and, perhaps, the entrance of smart money into the position. We observed something like this on the NEO chart earlier.

This pleasant picture of growth can be spoiled by the fall of Bitcoin, which is more than likely. Meanwhile, the level of $195, from where a large number of long positions was acquired, is a key one, but not the most reliable. Much more solid support is offered by $188, coinciding with the 0.786 Fibonacci retracement.

If there is a top altcoin which is an attractive investment now from the point of view of technical analysis - that coin is Monero. In the event that these decline targets are achieved, we recommend buying, with a stop-loss of course (in the current market situation, there is no other way).

In the past few days, Ripple has not stood out in any way - the price didn’t make any sudden leaps, trading volumes remain consistently low, the lateral support level is almost broken through. We expect a further price decrease to the level of $0.55.

There is no talk of growth at this point. XRP has been in a downtrend for a long time and there have been no signs of reversal. Most likely, even after the beginning of global growth (which is sure to happen, one just needs to be patient), Ripple will be one of the coins trailing behind. We recommend that readers refrain from trading.