Dmitry Cake
A bit of hesitation does not endanger further growth. Bulls and bears take a break as Bitcoin price sticks at $9,000. 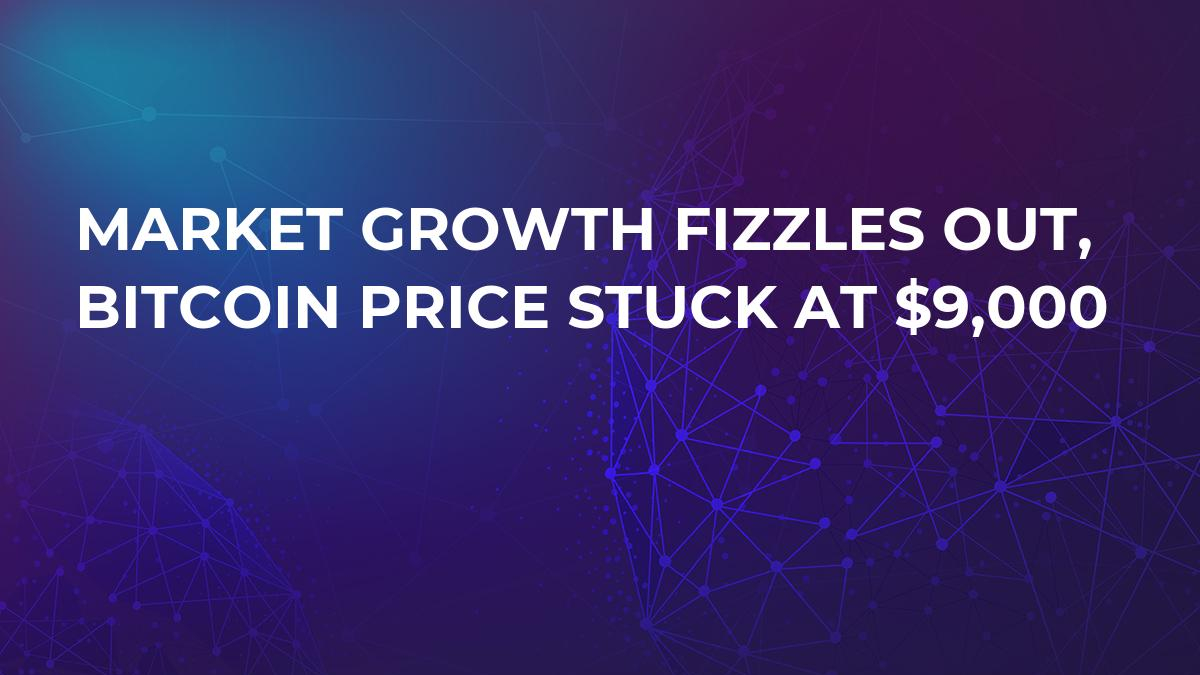 There is often a situation in the market when by the middle of a week that began with rapid growth, trading volumes are falling and uncertainty is increasing. There are psychological and material causes for such player behavior, but the principle at the root is the same — resources (both emotional and financial) need time to recharge. Yesterday we wrote that Wednesday was likely to be a day of lateral movement, and that’s exactly what happened.

Most assets (this applies to Bitcoin as well, which is still trading at $9,000) did not change in price, but market capitalization continues to grow and has reached $350 bln by Thursday. For the second day in a row we see a $15 bln increase in capitalization, but while on Tuesday the entire market showed growth, Wednesday’s value gains were aided by individual assets that significantly outperformed average growth indicators.

EOS is a striking example of such an asset, easily reaching the first target of $6.8 and immediately moving onward to $8. In addition to the fact that the coin is attractive in itself due to its prospects, the developers have also fueled interest in the project by announcing a partnership with a major German fintech investor FinLab AG.

Together, the two companies will establish a $100 mln fund, and this is just the beginning - in the future, developers promise to raise $1 bln in funding. The money will be used to finance future projects on the EOS blockchain.

Yesterday we observed an attempt to attack the market, specifically Bitcoin, with negative news in the best traditions of yellow journalism. The news itself is so ridiculous, absurd and at the same time unpleasant that we will not reproduce it here - curious readers will have no difficulty finding this information online. Here’s a hint - it is connected to illegal materials allegedly found on the Bitcoin’s blockchain. The news was swallowed up by the market, the price of Bitcoin did not react, so we can state the fact - the attack failed.

The maximum price of Bitcoin on Wednesday was $9,180, and the minimum was $8,770. Yesterday, we warned readers about a possible decrease to $8,800 and recommended adding to long positions at this level.

After a minor correction, trading volumes fell significantly. This happens when buyers have already bought, and sellers have sold the asset in accordance with their goals. For now, the bulls missed their chance of a rapid break through the resistance - it will take some ingenuity to create a favorable occasion. Such an opportunity could be provided by reaching the level of $9450, found using the Fibonacci grid, at the point of its intersection with the lower boundary of the ascending channel.

At the same time, we are inclined to think that the hourly chart shows a formation of the “diamond” figure of technical analysis which usually indicates a reversal. Of course, right now we are not talking about a new bearish trend, but in case of activation, the price could test the mirror level of $8,600 and still remain above the main support - the boundary of the descending channel. Therefore, readers who bought Bitcoin for $8,800 can manually close these positions at the breaking of the lower side of the diamond (market by the letter A on the chart) in order to add them later at cheaper price.

Trading volumes, especially important for a young growing trend, are now the cornerstone of Bitcoin's further movement. If buyers manage to push the price above the level of $9,400, we are more likely to see an influx of new resources.

The records that EOS continues to set prompt us to return to the detailed analysis of this asset earlier than planned. By the end of Wednesday, the price of the coin reached $7.2 - that is, from the moment of reversal, in just 4 days, the growth was a staggering 80 percent! Investors can thank the development team, who chose a very good time to announce a new partnership - we have before us an instance of exemplary marketing.

The growth was stopped by the intersection of the 1.618 Fibonacci extension and the upper boundary of the descending channel, which EOS nearly pierced through. Now, the price can stand to cool down a bit. 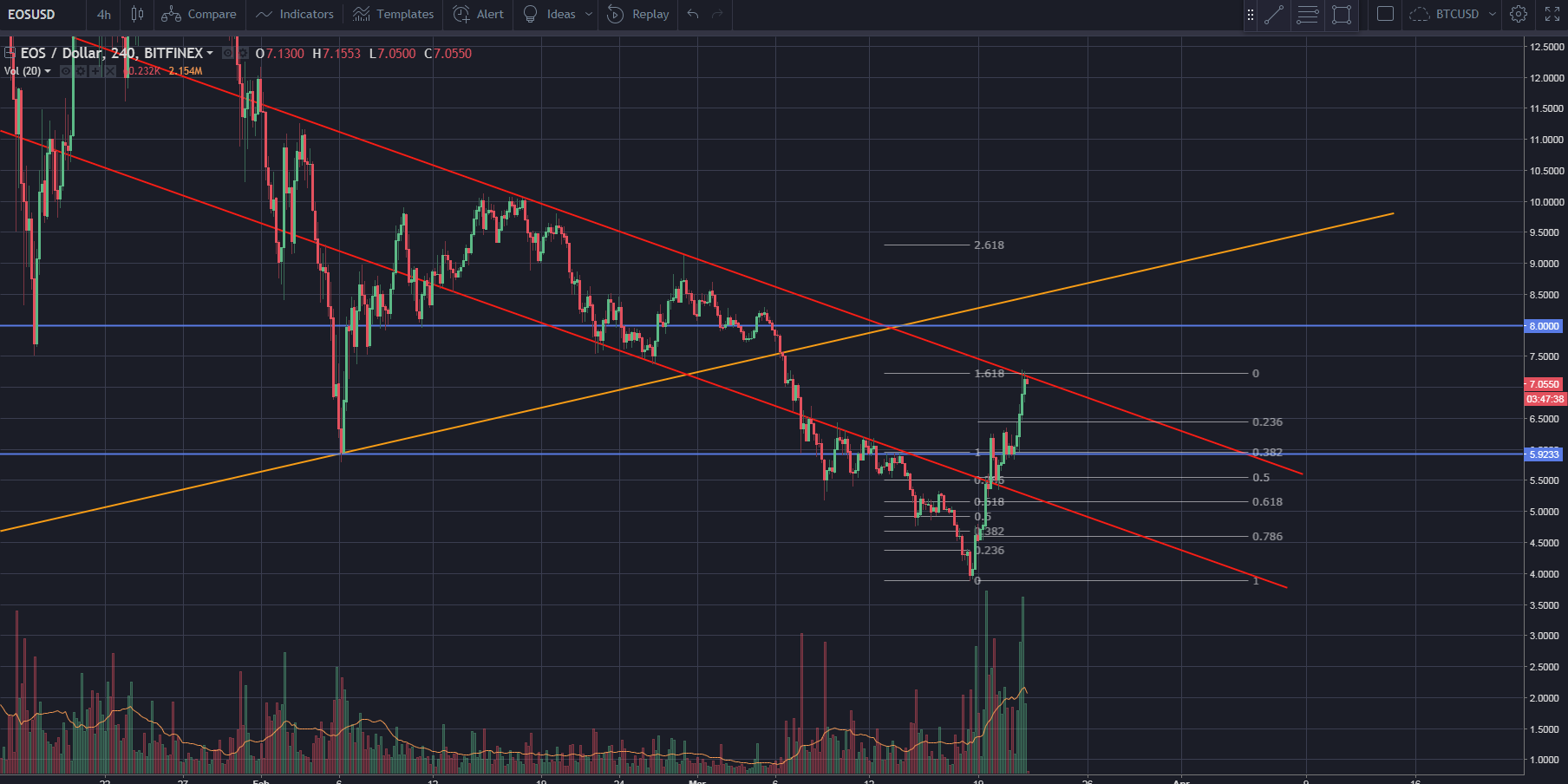 The nearest resting zone can be $6.4, it is indicated by the 0.236 Fibonacci retracement, as well as the mirror level. A decline to $5.9 at the level of the 0.382 correction is also possible, but the price won’t stay there for long.

The scenario for further growth has not been discarded, and our target of $8 remains relevant. After its achievement, the bulls will meet an important mirror resistance level, indicated by the orange line. The further fate of the asset in the short term depends on the decisiveness of their actions.