Dmitry Cake
The waiting game: Bitcoin is stuck at $8,100 as parties are gathering strength for the next move 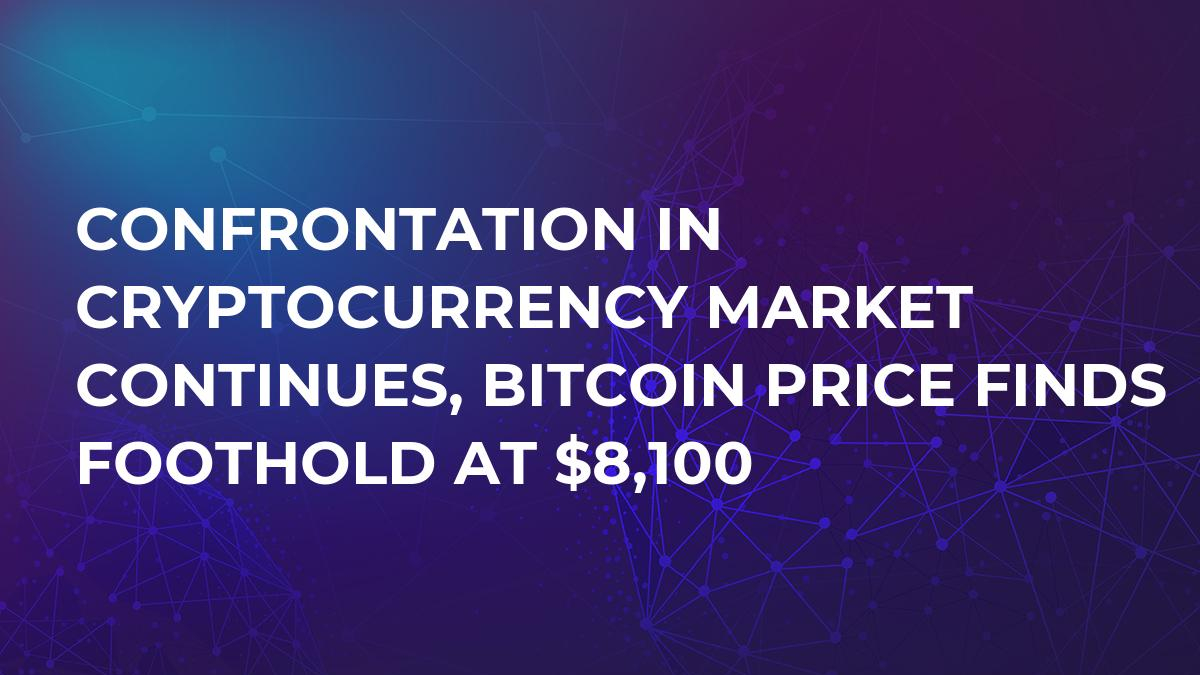 It feels like by the end of the week the opposing sides are exhausted- a great deal of effort has been expended already, but bulls and bears will only get their deserved rest upon achieving their goals.

So far, no one is getting anywhere and the main market parameters remain the same- just like yesterday, capitalization is at $325 mln, Bitcoin dominance is 42.5 percent, and its price is held within narrow (as compared to previous volatility) borders between $7,900 and $8,400.

The lateral movement of Bitcoin price creates a good opportunity for the altcoins to prove themselves. Of course, during an ongoing global correction, one cannot expect miracles from the coins- it’s good enough that they are not falling.

Some assets may occasionally stand out from the rest like Ripple did today with a growth of eight percent. The other members of the top 10 show more modest results with increases around two percent. In addition to XRP, Litecoin is still looking better than the rest of the market, and XEM is in the worst situation, having rolled back to 12th place.

Upcoming news may shake the market

The media is hashing over the news about the Google cryptocurrency and ICO advertising ban as if that alone provoked the drop in the market. Of course, the price takes into account all factors, but we encourage our readers to think critically- if we were seeing market growth right now, the news would be swallowed up and forgotten the next day.

The results of the G20 deliberations between representatives of central banks and finance ministers may turn out to be a much more fundamental factor for the crypto industry. Questions regarding the possibilities and the security of Blockchain technologies in general, as well as cryptocurrency regulation and anti-money laundering, measures will not just be put on the agenda- special meetings will be dedicated to these issues. We will certainly return to this topic and follow the market reaction to the statements of the participants.

At the time of writing, Bitcoin is trading at $8,200, where it has found temporary shelter. The fall was suspended at $7,700, upon reaching the lower boundary of the parallel descending channel, one of the many mirror levels, as well as the 1.618 Fibonacci retracement from the last growth wave.

It’s essential to understand that despite reaching a local minimum and making a small rebound, the trend remains bearish, and seller’s goals have not yet been achieved.

However, we wouldn’t rule out a slow turn from the current values. Buyers are beginning to put up resistance to the decline (this is evident from the long candle shadows, of which we are seeing more and more), but are unable to break the trend- bears are not allowing the price to gain a foothold above $8,400.

The further direction of the movement largely depends on the resources still available to bulls and bears. In this situation, bulls have a greater challenge, growth without volumes often ends badly, while bears are aided by the trend and by gravity. Big players may want to wait for the results of the G20, so the period of uncertainty might drag out. In the current situation, this is to the benefit of the sellers.

Further decline targets have been discussed here before- it’s the level of $7,200 with multiple confirmations. As for trying to break the trend, bulls need to get a comfortable foothold above $8,400, which they have not been able to do.

Yesterday, Ripple was falling harder than other coins in the top 10, so today, with the permission of Bitcoin as it sticks in place, we can see a slight recovery of lost positions. Growth is limited by the 0.786 Fibonacci retracement, and under the current conditions of uncertainty, buyers can’t seem to overcome it. Besides, XRP continues to move within the downward channel formed on March 5 after an unsuccessful attempt to break the resistance.

If market decline continues, buyers are likely to support the asset only at the $0.57 level, which corresponds to the previous minimum of the February correction. A surge in buyer’s activity is not only possible but also necessary. This level is critical, beyond it lies the road to $0.50 and $0.43, and those are values we haven’t seen since the middle of December 2017.

Right now Ripple is looking like an abandoned child, but this impression can be misleading. Compared to the middle of February, trading volumes almost doubled, so it’s likely that we are seeing a phase of accumulation before explosive growth. Ripple is quite capable of this, as we had the opportunity to confirm at the end of 2017.