Bitcoin Price Reaches $11,800 But Bulls Are Exhausted, For Now 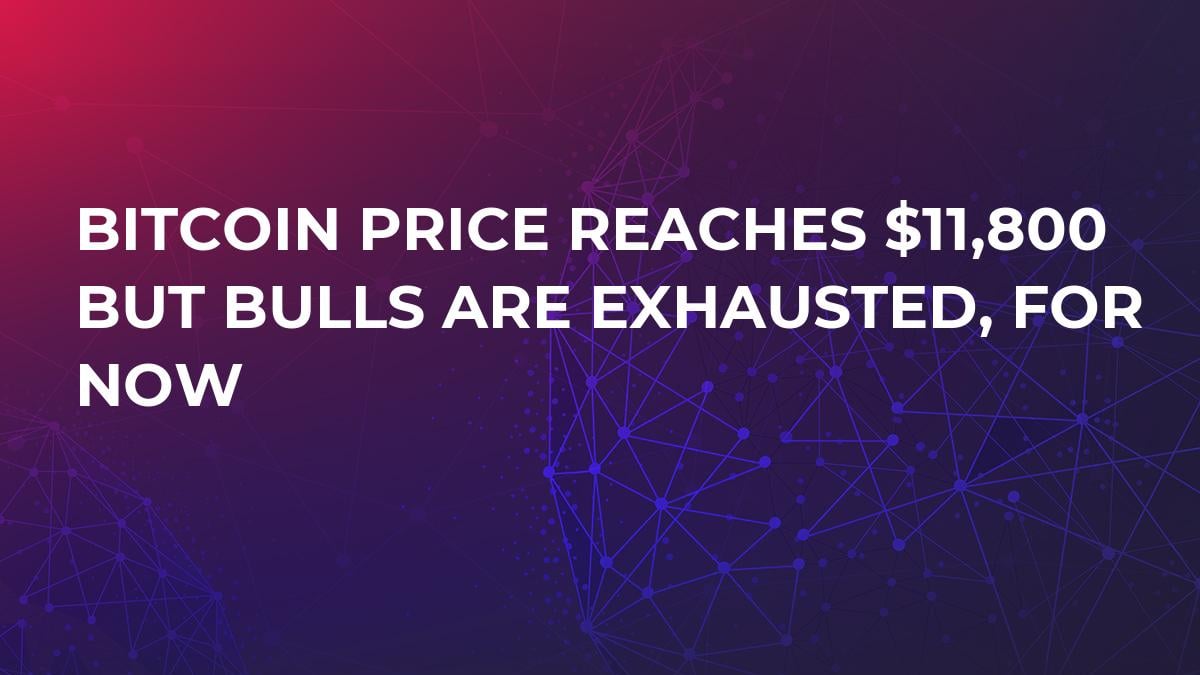 The cryptocurrency market was overflowing with fateful events on Tuesday as we watched with great interest. Though not on the first try, Bitcoin did manage to overcome the critical resistance level, reaching a maximum of $11,800 during the day.

However, just a few hours later, the bears came out of their long hibernation and struck back at a crucial moment, bringing the price of the underlying asset down by $1,000, and total market capitalization down by $30 bln to $480 bln.

No reason to panic

It was with good reason that we advised our readers to be cautious and refrain from trading operations because the main thing in such a situation is to avoid hasty decisions that could lead to loss of assets.

“In general, in our opinion, investors have no reason to panic, the growth scenario remains in effect, and the recent events should be seen as a necessary step back to refuel.”

As it usually happens, altcoins reacted strongly to Bitcoin’s correction and colored the market red (both in the top 10 and beyond). While BTC decreased by about 2.5 percent, other assets fell by eight percent or more, on average. This allowed the forefather of all cryptocurrency to gain even more dominance, up to 39.2 percent, which corresponds to the values ​​of July 2017.

IOTA suffered more than others, conceding the last position in the top 10 to Dash after a 12 percent decrease. It’s followed by Stellar, with a price decrease of 11 percent. NEO and Bitcoin Cash round out the losing coins with a decrease of nine percent each. Litecoin is looking better than the rest of the market, falling by “only” four percent.

At the time of writing, Bitcoin is trading near $11,000. The reason for the price decline was the weak activity of buyers after reaching the critical resistance. Yes, this level was broken, but not on the first attempt and at rather low trading volumes. After a three week ascent without significant rollbacks, the resources of the bulls were depleted.

It’s a good sign that the price stayed for a sufficiently long time in the upper register of the ascending channel, the boundary of which slowed the descent. According to the volume profile data, a large amount of BTC for the period since Dec.17 (the previous global correction) was traded in the range of $10,750-$11,300, and we are now in the very middle. Further price reduction cannot be ruled out, although it is unlikely to be significant, $10,750 coincides with the 0.618 Fibonacci retracement. At the most, there is the possibility of a safe decline to $10,500. As for growth scenarios, they will be activated only after a second break through the resistance and the settling of price around $12,000. We recommend our readers to keep their defenses and not to part with long positions.

Bitcoin correction could not leave its nearest competitor unaffected, as a result, Ethereum price fell to $860. On the chart, we see the activated figure "head and shoulders," the dimensions of which have been realized with high accuracy. In addition, the price decline was slowed by the 0.236 Fibonacci retracement.

The fair price for Ethereum in the considered time interval is $930 and we believe that this level will soon be reached again. However, if Bitcoin price correction continues, we can’t exclude the possibility of Ethereum movement to $820, where there is strong support in the form of the lower boundary of the ascending channel, as well as the 0.382 Fibonacci retracement.

The DASH chart is quite reminiscent of Ethereum’s price fluctuations, with one difference- DASH has overcome its critical resistance level (marked on the chart in red). Otherwise, the situation is similar, the current drop to $660 also stopped near the boundary of the ascending channel and the 0.236 Fibonacci retracement level, with a small margin.

The fair price of Dash is very close- its value is $700. In case of further decline, in the worst-case scenario, we can see a test of the 0.382 level, coinciding with the price of $600. We will reiterate: there is no reason for panic. Medium and long-term investors should not view the current situation as a threat to future profits.