Bitcoin Drops to $6,600, Ethereum and Ripple Follow the Trend

Dmitry Cake
Buyers’ carelessness was punished as Bitcoin fail to continue the growth. The whole market is down, again. 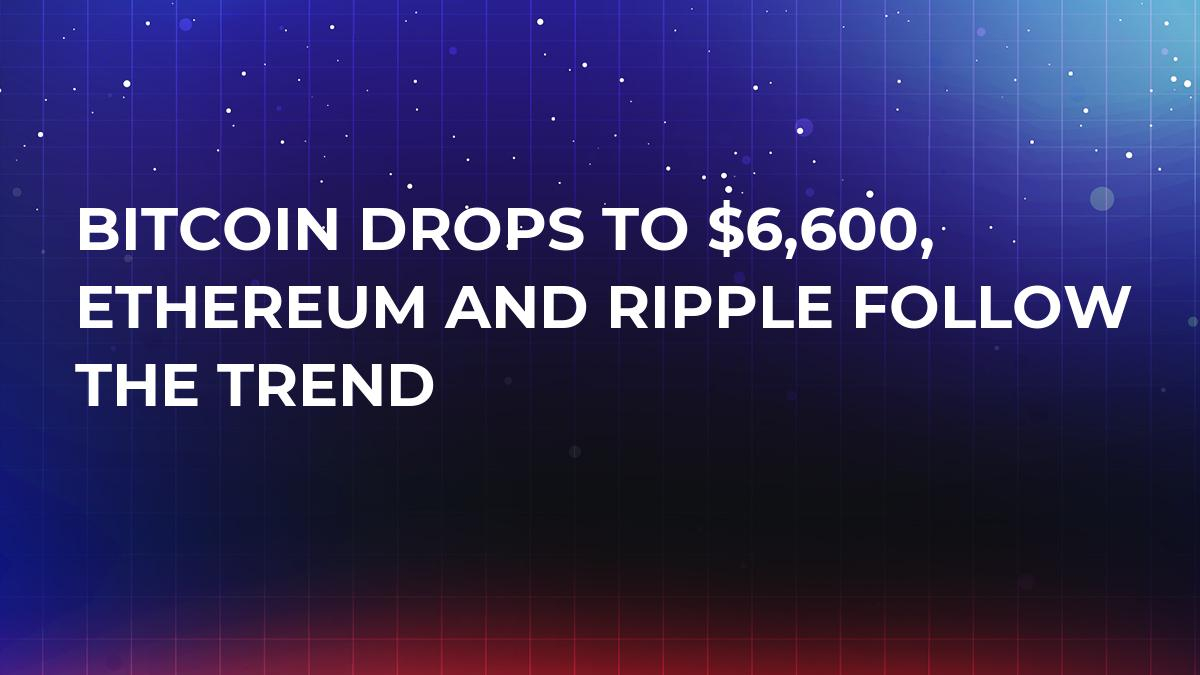 The week has gotten over the hump, and Bitcoin has gotten over the next critical level of support, giving the bears a unique opportunity to profit from the panic without much effort. We have written about this scenario since Monday, and we hope that loyal readers were able to build a risk management plan based on our observations and recommendations.

The market reacted quite strongly to the new cycle of Bitcoin decline. Capitalization fell to $250 bln, Bitcoin dominance started to grow again and reached 45.2 percent. Among the top 10 assets, the most noteworthy are Litecoin, Cardano and Stellar, which lost 13 to 14 percent, while other assets fell 9 to 10 percent on average.

More FUD expected if the market continues to fall

In the media space, the negative news cycle is not very prominent yet. The most recent of unpleasant news- the findings of Swiss researchers that the capitalization of Bitcoin may be greatly overvalued, even now.

This news is just the first harbinger that foreshadows new waves of FUD unless a miracle takes place and a mysterious buyer saves Bitcoin (preferably, right now) from dropping to the bottom. We look upon miracles in the market with a healthy dose of skepticism, so our task is to determine the depth of the possible bottom.

Technical analysis always goes from the larger picture down to the smaller, so again, we'll begin our evaluation with the enlarged image. Over the last 24 hours, Bitcoin has managed to not only fall one level lower within the long-term descending channel but also break the long-term uptrend, marked in green, for the second time.

At the time of writing, the fall was paused by the upper boundary of an even older ascending channel which originated more than a year ago, on March 25, 2017. The probability of a rebound from this boundary does exist under the current conditions, but it’s not very high. More likely, for a time, the upper register of this channel will become a new haven for the main asset’s price.

At the same time, we see that the decline has not yet triggered a wave of panic sales. Despite the fact that the bears have come out to feed, the overall trading volumes are still falling. They will grow if the price goes down to $6,000, where, on the one hand, the protective stop-losses will activate, and on the other, limit buy orders from those investors who missed out on purchasing the asset in February. The fate of the asset will be determined depending on whether there will be more buyers or sellers.

There is some hope in the fact that the level of $5,670 is not so far below, determined by 0.786 Fibonacci retracement from March 2017 to the all-time high Bitcoin price. Perhaps this is the nearest goal of bulls, but is it the ultimate one…  Ephemeral possibilities of growth can only be discussed if there is a rebound from current values and a foothold above $7,000 for Bitcoin today.

Ethereum hadn’t gone against the market during more peaceful times, so there is no sense expecting heroic feats from it now. The fall continues, and the first seller target is the update of April 1 lows - $360. The delicacy of the current situation is that the price is balancing near the 0.786 Fibonacci retracement, built from the values ​​of May 2016 to the highs of January 2018.

We are seeing some surge in buyer activity at current levels, but Bitcoin is putting too much pressure on the other assets. Therefore, the following goals of the bears remain relevant: they are $340 and $315, respectively. In the event that buyer interest will be manifest at these levels, it is advisable to consider purchasing a limited amount of Ethereum for the medium-long term at an attractive price.

Yesterday, when Ripple showed stronger growth than other assets in the top 10, we did not make too much of it. Today, our fears have been confirmed- growth has been completely corrected, and the downtrend hasn’t been broken. The current price is $0.49 cents- this is a level that has shown significant lateral trading in the past week. However, it’s not reasonable to hope that it will become a reliable support.

If the previous minimum, $0.45, also fails to become such a support, then the price will dip to the mirror level of $0.42, which finds additional confirmation in the form of the 1.618 Fibonacci retracement. The third target of bears is $0.4. For now, there is no silver lining in the cloud cover above Ripple.