Bears Drag Bitcoin Price to $8,350; Litecoin Holds On, Monero and NEO in Trouble 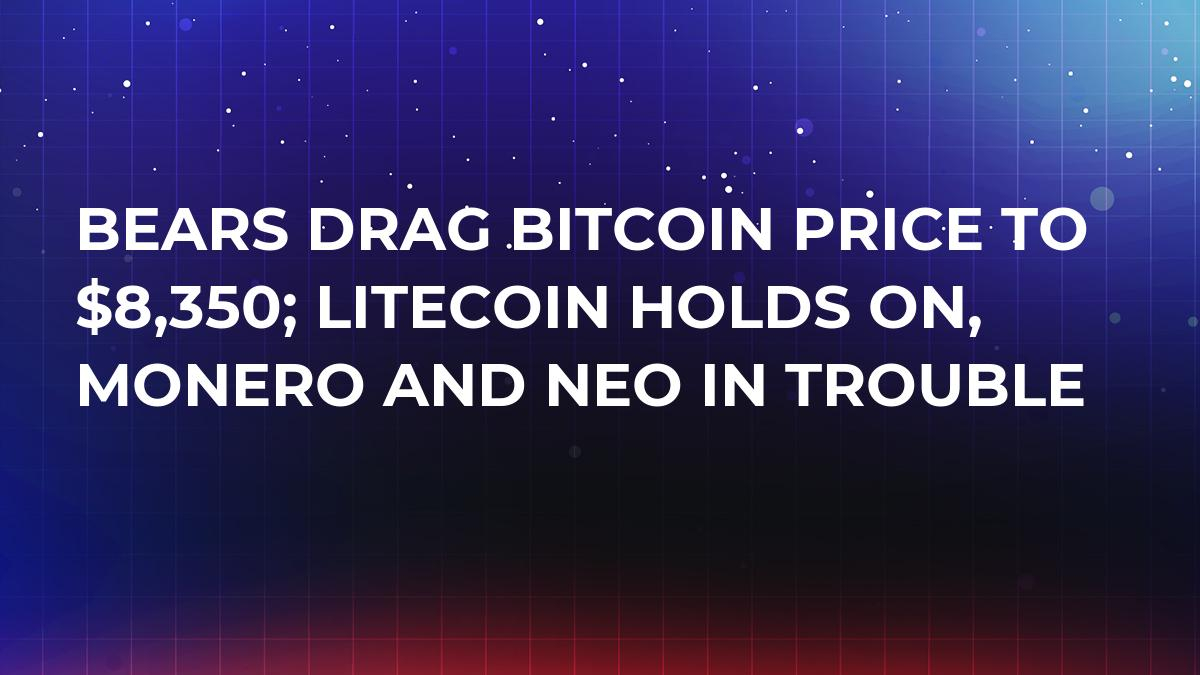 The resolution of yesterday's fragile equilibrium and indecision in the market was not what holders of long positions wished for. Barely having had time to recover from the last correction, the market is falling again, and for many assets we are seeing double-digit negative values.

The total market capitalization has lost $30 bln, making up $320 bln by the end of the week. Bitcoin price has dropped to $8,350, but its dominance is growing again- at the time of writing, it has reached 44.3 percent. This value is just tenths away from this year’s record, so we are seeing a tendency for Bitcoin to win back last year’s positions (in terms of market share, of course, rather than price).

Binance trips up the market

The news about Japan’s alleged ban on the Binance stock exchange became yet another informational trigger for the decline. Later, the official representatives of the exchange released a statement that the Japanese regulating body has some questions which are being resolved. However, by that time, the snowball picked up too much speed.

Yet again, we see how depending on the situation in the market, some news can go unnoticed, while other stories become powerful triggers for a trend change.

By the beginning of Friday, Bitcoin broke through the wide ascending channel, which is a bad sign for investors. The culmination of the previous correction took place just five days ago, such short intervals between significant declines indicate buyer weakness. The fall was stopped by the lower boundary of the parallel descending channel, but if the bulls do not take the initiative in the near future, this support will not last long.

Below, there’s the level of $8,200, formed by the 0.5 Fibonacci retracement and the fair price for the period from March 14. Depending on the rate of decline and the volume of sales, it can become either the final goal of the bears or an intermediate stop. In case of the latter, Bitcoin could test $8,000- the last more or less reliable support.

If the “hammer” candle combination, which can be seen on the hourly chart, is realized, then we may see a rebound to the $8,600 level, which is the key one in the current formation. Yesterday we recommended that readers close positions in case of the “diamond” figure’s activation, which is what happened. Now, purchases can be considered only after the price settles above $8,600.

Litecoin is in a downtrend since Feb. 20, 2018, but in terms of relative decline numbers (compared to other altcoins) the situation does not look catastrophic. At the moment, LTC price is $158, which is 10 percent less than at the closing of the previous day, during which the coin failed to break the channel. The fall was stopped by the mirror support level without reaching the 0.5 Fibonacci retracement, which is a good sign for investors.

If the fall continues, Litecoin will find reliable support at $150. First of all, a significant volume was traded at this psychologically attractive level. Second, it coincides with the mirror support, which showed its significance in early February. Finally, the strongest level of the 0.618 Fibonacci retracement is also located there. Real problems for holders of long positions will begin if the price goes below $150.

For a certain reversal, the bulls will have to overcome the level of $166. It is likely that the point of penetration of this resistance will coincide with the boundary of the descending channel, which will complicate the task, but at the same time will make the result much more meaningful in case of success.

Monero is one of the altcoins that are not doing too well. Overall, the chart is reminiscent of Litecoin, but there’s a significant difference, XMR price has already gone below the 0.5 Fibonacci retracement; therefore, the rate of decline is much higher. The main support for the coin also coincides with the value of 0.618 and $198. Only $4 separate Monero from this mark- in case of a sudden downward fluctuation, the support will not hold.

The level of 0.786 is located at $190, which also corresponds to the mirror level. We recommend that our readers treat it as the last bastion below which there are only the March and February minimums.

After the postponement of the hard fork, the attention toward Monero has decreased significantly. Since the beginning of March, trading volumes are decreasing, which can have a negative effect on the volatility of the coin. Due to this, we recommend that readers refrain from trading until receiving confirmation of investor interest.

The situation with NEO seems to be a cross between Litecoin and Monero. On the one hand, the 0.5 Fibonacci retracement level has not been broken yet, on the other hand, the price (currently $64.5) has been actively tested. For NEO, this support is more important than for other coins, because it coincides with the minimum of the February correction.

At the same time, although the value of 0.618 finds a double confirmation in the form of a mirror level, the last time the price was sensitive to it was at the end of December 2017, so the support may have lost its relevance. Below it, the bulls can only be saved by the $50 minimum of the March correction, and after that the abyss.