Cyril Gilson
Future can be viewed as a positive-sum game if brain creativity is accommodated by smart contracts and greed is leveraged by prosocial ends: Max Borders 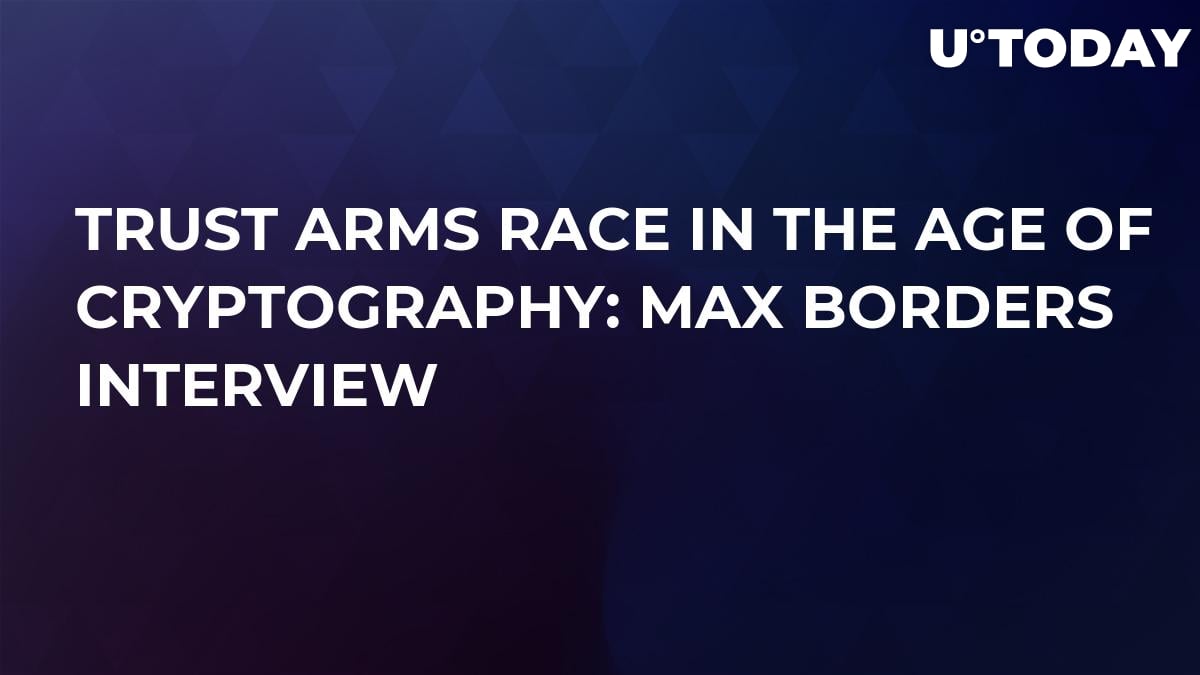 Futurist Max Borders is author of The Social Singularity: A Decentralist Manifesto. He is also Executive Director of Social Evolution, a non-profit dedicated to solving social problems through innovation, a widely published writer and co-founder of the event experience Voice & Exit.

UToday discusses with Max Borders the future of communities in the age of the coming technological singularity, a new big thing after the attention economy, the failures and hopes of the US as a project, decentralization, FAGMA and the crypto market as a non-zero sum game.

UToday: Could trust economy be the next big thing, after the attention economy?

Max Borders: That is the optimistic vision of The Social Singularity, I think, though I did not put it specifically in those terms. If we can program incentive systems and networks that give rise to trust, people will almost always prefer those and will migrate to them where possible. I don’t want to overstate my optimism, however.

This is a long game. Big companies and big governments have lots of sticks and carrots at their disposal. And they will use them.

Many people have a deep inner urge not only to believe in the promises of central authority but to submit to it. So whatever the alternatives are, they must be robust and far more attractive than the status-quo system. Migrating between systems must be a simple, low-cost proposition on the part of the defectors or those who are ready to move out onto the frontiers of the network age.

UToday:  Do you think trust can be monopolized by the Leviathan (state/corporations) as it almost happened with attention?

Max Borders: Certainly not. Trust is more or less the product of repeated positive interaction among people. In the former Soviet bloc, people developed clever and systematic ways to evade the state’s panopticon, relying heavily on bonds of trust that amounted to winks, nods and robust black markets. Paradoxically, people in the former Soviet bloc also developed cheater's mores, but I’ll leave that for now. But people imagine they can trust central authorities, and some generally regard the state as generally trustworthy, as they are under the spell of thinking that angels are meant to be in power.

So, in the age of cryptography and connection, I worry there will be a trust arms race between central hierarchies and prosocial networks. But I hope trustful networks will prevail over attempts to create third-party leviathans that promise trust.

UToday: Game theory says that trust (as in trust between people) can only evolve in a non-zero sum game. Do you agree?

Max Borders: This strikes me as at least intuitive (unless the game is a negative sum of course). It’s certainly a good heuristic for designing incentive systems. But those systems will compete in a kind of evolutionary fitness landscape, which we hope will generate the most prosocial systems while the anti-social systems die off.

That said, I don’t want to give the impression that all systems should be “trustless” in the way that some distributed ledgers are designed to disintermediate. I think some systems can and should hypermediate, which means that they involve more participants with different perspectives and subjective points-of-view.

UToday: The US pretty much started as a utopia attempt (and a voice & exit thing). What place do you think the US has in this subversive innovation that's currently happening?

Max Borders: The US project, a constitutional order, was a valuable and instructive one. But it is essentially dead. The processes of institutional corruption, like power in collusion with money (obscured as it is by the spectacle of electoral politics), has created a system that basically trundles along but has lost its way. So it’s time for an upgrade.

That upgrade won’t happen by the reflection of legislators in deliberative bodies. It will happen by entrepreneurs and innovators offering alternatives that are just too tempting to pass up.

Such is not to say that there are no subversive innovators here in the US. We are everywhere. It is rather to say that the US’s social operating system is getting buggy. And that is true for most of the Westphalian nation states whose people are temporarily trapped in old nationalisms, and whose leaders aren’t coming to grips with the decentralization that is now unfolding before our very eyes. The days of central power are numbered. The forces of change can only be stopped if the world’s leaders agree to be way more totalitarian than they are. But even totalitarianism can only work for a time.

UToday: Is voting based on Blockchain (as in presidential elections) outside of the scope of change?

Max Borders: If it’s not, it should be. Blockchain-based voting rather misses the point of what’s possible with these new systems. And to be fair, I don’t care a jot about voting in the sense of majoritarian rule. The worship of democracy that is so pronounced in Western nations like the US strikes me as a failure of imagination coupled with an implicit bias to vote oneself goodies or to express one’s values without having to do the hard work. The hard work is to build participatory communities that attract and retain members.

My hypothesis is that this new market in governance forms will challenge all of these older ideas about the relationship between the government and the governed- not to mention they’ll challenge the idea that jurisdictions should be attached to terra firma.

Let us, therefore, pluck our governance from the cloud. Let a thousand experiments bloom. Then let 80 percent of those experiments die or evolve- over and over, ceaselessly. There will be no end of history. There will only be new governance systems that emerge victorious for a time until something better comes along- where “better” is in the eye of the beholder.

UToday:  During your 2017 Burning Man speech, you said: "Bitcoiners are extremely ultra left-brained." Could you expand on this?

Max Borders: ”Left-brained” is shorthand for logical, rational- with a tendency to view the world through a systems lens. Many of the early adopters of Bitcoin were geeks and coders, for example. This is a good thing on the net.

But the next phase will be how to accommodate the creatives, the artists, and those with insights that are not always translatable into stark on/off binary thinking exemplified by smart contracts.

UToday: Any ideas on how right brain creativity can work with Blockchain algorithms? Would you say that Steemit does it in a way?

Max Borders: This is a hard question, particularly for me because I am not a software developer. Tentatively, I would suggest that it depends on which level of description you’re talking about. So on the one hand, you might get very left-brained systems at the protocol level, but these systems can give rise to forms of interaction that are a lot fuzzier and distinctively human.

On the other hand, it’s a bigger challenge to think about how one builds fuzziness in at the protocol level. Such questions are admittedly beyond my ability to answer. However, I think creatives and coders will discover new ways to interact in complementary ways that will generate amazing opportunities for human flourishing.

Steemit is an interesting early effort, but I think there is a lot more to come. A simple current example might be improved UX/UI, guided by more intuitive minds. So much of what we have to deal with now is neither simple nor terribly secure (such as keeping up with goddamn private keys, or a thousand passwords).

I would like to see society’s most vulnerable people using cryptocurrencies, for example. But that will happen only to the extent that we can make interfaces for human beings instead of just Vulcans.

UToday:  The crypto market has some characteristics of a non-zero sum game. With more money flowing into crypto, more people are going to get rich. So greed, in a way, is fuelling the move to decentralization. Do you agree?

Max Borders: Yes. Greed, or at least self-interest, will almost always be the primary driver of progress. My organization, Social Evolution, is currently working on a system of mutual aid that attempts to harnesses both self-interest and altruism within a single system. I hope this will become a “killer app” because we are both greedy and altruistic creatures by shades. But I’m under no illusions: you have to get the incentives right. The very idea of incentives imbeds the idea of our basic self-interest. It’s in our bones as a species. Greed cannot be jettisoned. It must be leveraged. But hopefully, we can leverage it to prosocial ends.

UToday: But generally, isn’t it too much hype about decentralization? Is it becoming a myth, with FAGMA (Facebook, Apple, Microsoft, Google, Amazon) putting whole industries out of business?

Max Borders: We shall see. FAGMA has massive network effects, which will be hard to overcome. But they’ll only be able to stick around if they are able to match the powerful incentives these new systems will soon offer potential defectors. Whether or not decentralization is or is not a myth will turn on whether the innovations A) reduce transition costs and B) offer benefits to the degree that the value of the old systems can be replaced as people defect.

To be honest, I am currently a slave to FAGMA. And I derive a lot of value from those relationships. I wrote The Social Singularity using a Mac, on Google docs, promoted on Facebook and sold via Amazon. I guess that makes me a shitty decentralist, despite having written the book.

That fact notwithstanding, we’re still in the DNA and single-cell stages of what will become a Great Barrier Reef of technological change. When the developers get the products right, we might just get to a tipping point.

UToday:  Could AIs beat the humanity in decentralization, growing their own Mycelial Network?

Max Borders: Egad! It makes my head hurt to consider this possibility. But it is a possibility. My hope is that we are able in some sense to merge with AI before it comes to regard us as a competitor or a cancer. I hope it thinks of us as a companion or a continuation of its being. Can AI evolve empathy? Love? Will it feel at all? Or will it evolve into something more insidious and unstoppable?

My hope is that as we upgrade our collective intelligence (CI) we will co-evolve with AI and form common “mycelial” networks that give rise to something far greater than we can currently imagine.

And I gather that such wild predictions loop back to the first question above about life on earth viewed as a positive-sum game. We really don’t have a choice but to be optimistic. Because CI and AI are going to push us into a future that is not really of our choosing. And as CI and AI weave together, we will be as demigods operating in the form of expanded consciousness and intelligence that is right now the stuff of dreams.

Cyril Gilson is Editor-in-chief of U.today. In 2015-2017, he worked as Editor-in-Chief of Cointelegraph. A keen cryptocurrency enthusiast, he is very supportive of new media projects, pioneer ideas and the Bitcoin community.