Eric Eissler
ICOs like businesses fail too, here are some of the biggest failures of 2017 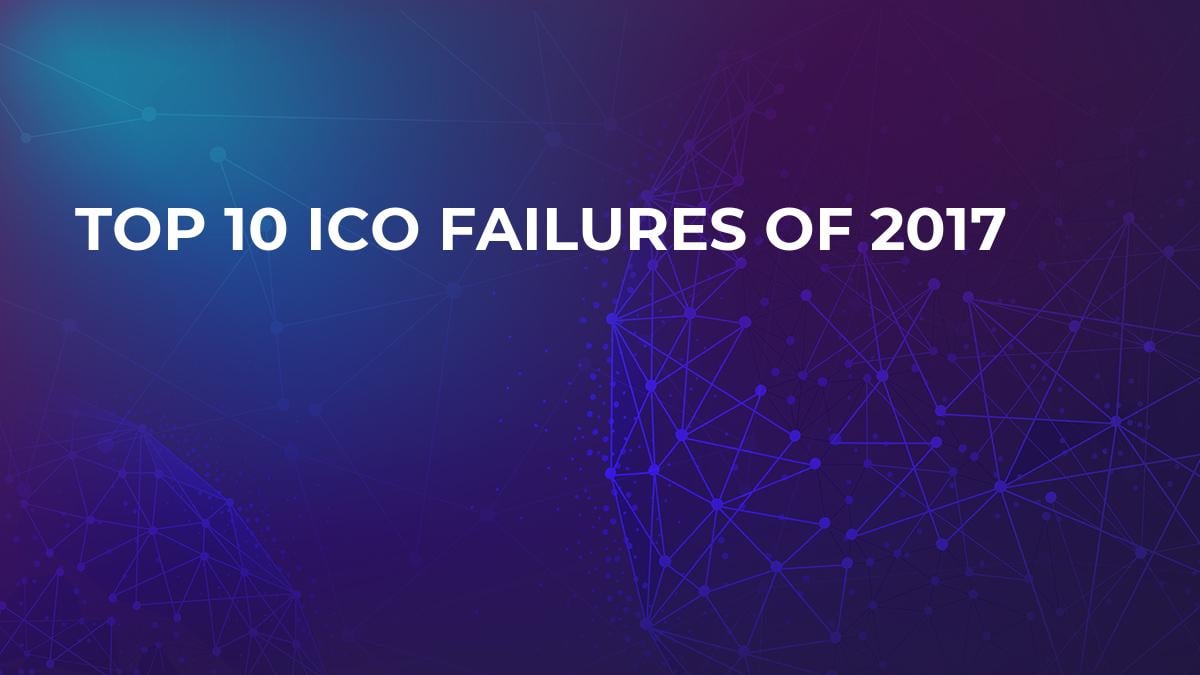 It is true that 50 percent of all businesses fail, and that is also true of ICOs- they are businesses, too. From 2017, let's take a look at the top 10 ICOs that failed the hardest, due to bad business practices, founder quarrels, poor products, or scams run by con-artists.

OneCoin could have its own article, but for the sake of space, we’ll summarize the story here. OneCoin was a true Ponzi scheme concocted by Ruja Ignatova, a Bulgarian national who has been previously connected with other Ponzi schemes. She founded two companies OneCoin Ltd. in Dubai and OneLife Network in Bulgaria. Between the two companies, which sold investment educational material. Later when questioned by authorities, OneCoin claimed that it only sold educational materials and was not selling tokens, when in fact they were. Buying into the “educational packages,” which were blatantly  plagiarized materials, the victims received OneCoin tokens which were used to “mine” OneCoins. Long story short, Europol got involved, the only exchange where OneCoin was worth anything (OneCoin’s own exchange) shut down and the OneCoin became zerocoin- worthless. Charges were later brought against Ignatova in India in April 2017, at a OneCoin recruiting meeting. There are accounts of her arrest several times in various countries in 2017, however these accounts appear to be false and Ignatova is at large. In Late January 2018, Bulgarian police raided the office in Sofia and officially shut it down.

It is still a mystery of who hacked Enigma, which was a legitimate business at the time. Engima was rather boastful about its security and new encryption techniques ahead of its ICO. However, its security seemed subpar when all of its systems were hacked mailing list, website, and Slack channel were hacked. The hackers used the above to reach out to potential investors about a “pre-ICO sale.” Despite warnings about a scam, many still invested at hackers made off with $500,000 worth of ETH. The CEO then looked pretty bad because his account was hacked because he did not set up his two-factor authentication. Whoops.

A pure rip off QRL. Without any effort, scammers copy pasted QRLs white  paper and GitHub code to their site and only replaced QRL with Droplex. When people started to become aware, the scammers slowly reacted by changing the code. In the end, the lazy scammers’ haul was about $25K. Not bad for cheaters, but in the end cheaters never win; karma will come around.

Israel-based Coindash was another hacking victim. Hackers either created an identical website or diverted the wallet address to make off with more than $10 mln in stolen ICO funds. The company still managed to raise about $6.4 mln and promised to send tokens to those who donated to the hackers inadvertently. Despite this once a hack happens and money is stolen, reputations are forever damaged and it near impossible to reverse the damage.

Hacked or inside job? Veritaseum, a p2p personal banking company, lost $5.4 mln to alleged hackers. However, it was unclear what really happened as there were many red flags about the company’s website, the technology used, and many cries from Reddit about these things and the general shadiness of how the story unfolded and the rather weak defenses the company took. The final nail in the coffin was the large sale of Veri tokens and massive price increase around the time of the sale--someone got rich fast. Who could that be?

Wallet hack, yes your wallet can be hacked too! Finding a vulnerability in the multi-signature wallet issued by Parity. Parity is used for building Dapps and comes with a wallet. The hacker made off with $30 mln! But the gains did not last long as other hackers were able to trace down the pathways and recover most of the funds that were stolen.

If it’s Swiss, its usually superior quality, right? Well, not for Swisscoin, this project had more holes in than Swiss cheese. Swisscoin was touted as an instant payment system with interest-free payments. I have heard of fees for making money transfers, but who pays interest on transfers, unless they were sending loans...Logic interrupted… regardless of what they were trying to do. They were busted by the Swiss police and $500,000 of stolen cash was found, as well as a stash of weapons and ammunition. The scammers face 12 years in prison.

While it is not a new idea to have a Blockchain-based, trustless gambling gaming website, what is new is one where the founders come forward and cancel the ICO because they were not going to be able to satisfy investors. The following is from the Slot N Slot team: “At the current stage, we lack the confidence that the project can be a success, and enforcing the crowdsale in such conditions is an irresponsible decision. For this reason, we are retracting the crowdsale (ICO) for the project.” At least they were honest.

US Boxing Champ Floyd Mayweather gave some PR to Centra Tech, which launched an ICO in the fourth quarter of 2017. It raised nearly $32 mln. However, the founders and owners of Centra Tech are being changed by the SEC for selling unregistered securities. The charges were brought when the SEC discovered the company has no agreement with either MasterCard or Visa to support their prepaid cards (there were part of their business model) and also for having falsified impressive biographies and creating false or misleading marketing materials. The SEC won this round by technical knockout.

A search engine for products just does not seem like a good idea, when you can just search via a general search engine.  This was just a bad product with no interest. CEO Sergey Ryabov said in a statement that “We will repack the product. Perhaps we will rebrand it. Bring the globality of our idea to investors. We will conduct the pre-sale and ICO according to the usual market scheme, attracting large investors in advance. Actually, everything is just beginning!

While there are many more that failed, this was just a glimpse into why and how so many ICO fail after launch. The reasons behind the failures are the same ones that countless other business suffer from. While there is a lot of hype behind all the failures, don’t let this fool you, there are plenty of successes out there too.