What is NEM (XEM) - Simple Explanation for Beginners 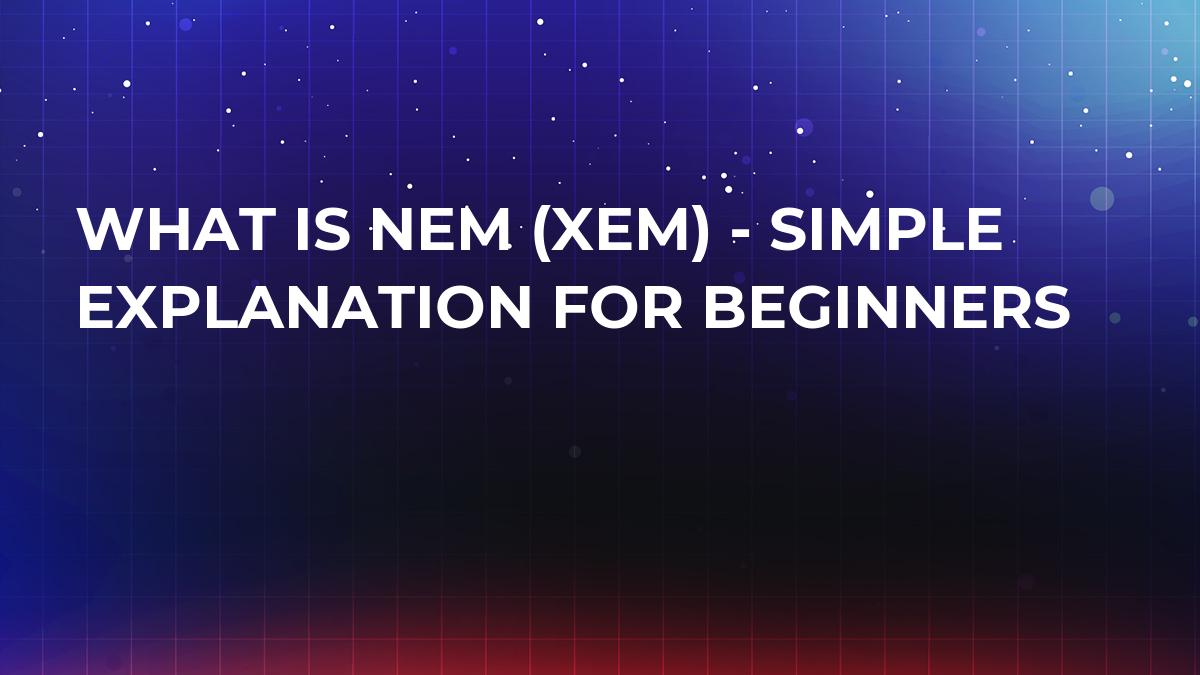 Introduction to NEM. What is it?

NEM (New Economy Movement) is a P2P cryptocurrency which currently has the 14th biggest market cap. Its native token is called XEM. At the beginning of its existence, NEM was a fork of NXT, another popular currency, but then the team of developers came up with their own codebase in Java in 2015.

The NEM.io Foundation is currently creating a brand-new C++ rewrite. The project entitled “Catapult” (or simply “NEM 2.0”) is expected to be released at the end of May. The private beta testing of Catapult already happened in March.

The so-called “Smart Asset System” is the most distinct feature of NEM. It allows users to customize the blockchain for their apps with the help of powerful on-blockchain features.

The NEM blockchain has a system of nodes that cooperate in order to conduct Smart Assets transactions. They are responsible for providing direct access to the NEM API and securing the stability of the network by cooperation with each other, confirming transactions, etc.

NEM uses a decentralized algorithm called Proof-of-Importance (PoI) which determines what individual can verify a certain transaction. It poses as an alternative to the Proof-of-Stake (PoS) algorithm employed by other blockchains. Many critics of PoS-based cryptocurrencies argue that only users with higher stakes are able to earn more.

POI helps to fight “the rich get richer syndrome” by assigning consensus addresses and the importance score. Thus, people start valuing their reputation more than money. If you have the highest stakes, it does not mean that you are guaranteed to find a new block.

Your chances of verifying transactions also depend on the quantity and quality of transactions that you have done in the past. You need to have sent at least 1,000 XEMs to addressed that already have at least 10,000 XEM staked. Creating multiple accounts and exchanging XEM between them won’t work, since the system prevents you from staking all 10,000 XEMs at once.

The net loss of the account is also taken into consideration when determining the importance score (an account that sends XEMs and then receives them back will have a lower PoI score). In addition, your reputation on the network depends on the number of transactions you verify. Therefore, most active users become most valued users.

Another significant advantage of the PoI algorithm is that it does not require expensive mining chips. Unlike Bitcoin, NEM does not allow large mining facilities with powerful hardware to establish a monopoly and put individual miners out of business.

PoI is compatible with practically any hardware which significantly reduces energy consumption. It was estimated that the NEM network only needs 1/100th of what Bitcoin consumes in order to conduct a single transaction.

When it comes to the NEM network, you don’t actually mine coins, but harvest them. The process of harvesting leads to the creation of a new block. However, harvesters do not mint new coins, since all the NEM coins have already been created. Such an approach helps to avoid coin inflation. Harvesters only profit from the transaction charges. The more businesses use NEM, the more profitable harvesting becomes.

Harvesting presupposes that a user simply assists in verifying the transaction by attaching his account to a supernode (a remote server the processes transactions) and lending his importance score. You don’t have to reveal your private key to a super node in order to conduct a transaction.

This is an important security issue: even in case of a super node becomes a victim of hackers your account never gets exposed. Make sure that your private keys are always safe, so you won’t lose your points!

Only those users who have the minimum amount of 10,000 XEMs vested in their accounts can become harvesters. NEM's mechanism vests 10% of your account balance on a daily basis. Thus, if your initial investment is 100,000 XEMs, you will be able to harvest coins in a day.

As mentioned above, you can use an ordinary computer in order to harvest XEMs. Furthermore, the process of harvesting continues even when your PC is off. You can also use ASIC hardware for your harvesting needs, but it is definitely not cost-effective taking into account the energy expenses. All you have to do is to create a Nano Wallet and install any suitable software (for example, Ethminer).

Such a security measure (which may seem as a disadvantage to some members) helps to protect both parties. However, payments remain irreversible. If you happen to send money to a wrong address, it would be very difficult to get your money back.

As mentioned above, the information about your transactions is accessible to every member of the NEM blockchain. Businesses that do not want to expose their transaction data may consider using Mijin, a customized private version of NEM.

Mijin is a one-of-a-kind private blockchain solution for different types of companies. For example, it can be used by banks for managing their customers’ accounts that are not supposed to be accessible to any member of the blockchain. Along with an additional layer of security, a private blockchain also significantly accelerates transactions.

Mijin is fast enough to run a banking system that processes over 5 million transactions per day. It’s worth mentioning that Mijin allows you to have multi-asset accounts that can be used for storing dollars or stocks.