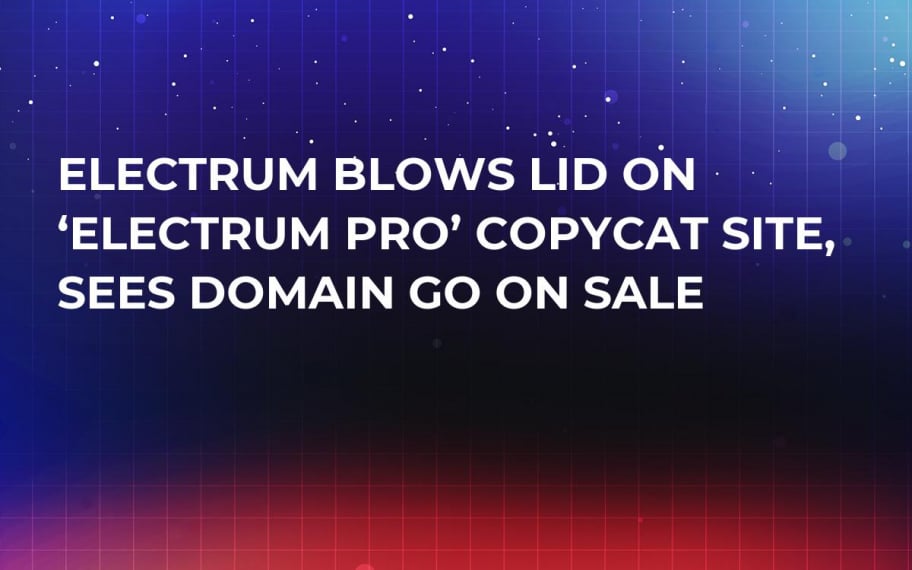 Electrum, a Bitcoin wallet, has come out an announced that a site calling itself Electrum Pro is a Bitcoin-stealing malware copycat site. The allegations have been widely reported now, and in response, the owners of Electrum Pro have put their domain up for sale.

Electrum Pro state that Electrum have destroyed their reputation, and managed to trick several news outlets to slander them, as such, head of the site, Lucas Lofgren, says they will be working on other products.

The domain, Electrum.com, not to be confused with the wallet’s side, Electrum.org, is now up for sale for 25 BTC.

Despite the two sites going at each other, and Electrum Pro maintaining that they have been slandered, Electrum have put out a document that explains how to decompile the Electrum Pro stealware.

It explains in the background of this document how this type of scam is nothing new.

“In the past, this kind of attack has been carried out by websites hosted on domain names similar to electrum.org (e.g. they swap two letters, or use fancy UTF8 characters that look similar), and using paid Google ads. Those websites are commonly just an almost exact copy of the official one,” the document read.

The battle between the two has been ongoing since April when they tried to prove their suspicions, which they have now done in this document.

Meanwhile, Electrum Pro had cloned their brand image, even created a website to fool unsuspecting investors. Electrum have also claimed that the Electrum Pro is claiming to be a fork of the genuine project.

It is only since the Electrum team was able to break down the malware that Electrum Pro was using in a detailed document that the counterfeit site finally closed up shop, leaving just a small not still denying the allegations, and putting the domain up for sale at a hefty price of about $220,000.