David Dinkins
Mainstream media is under the impression that Google’s ban on crypto advertisements is tanking the market, but the community seems to be shrugging off the news. 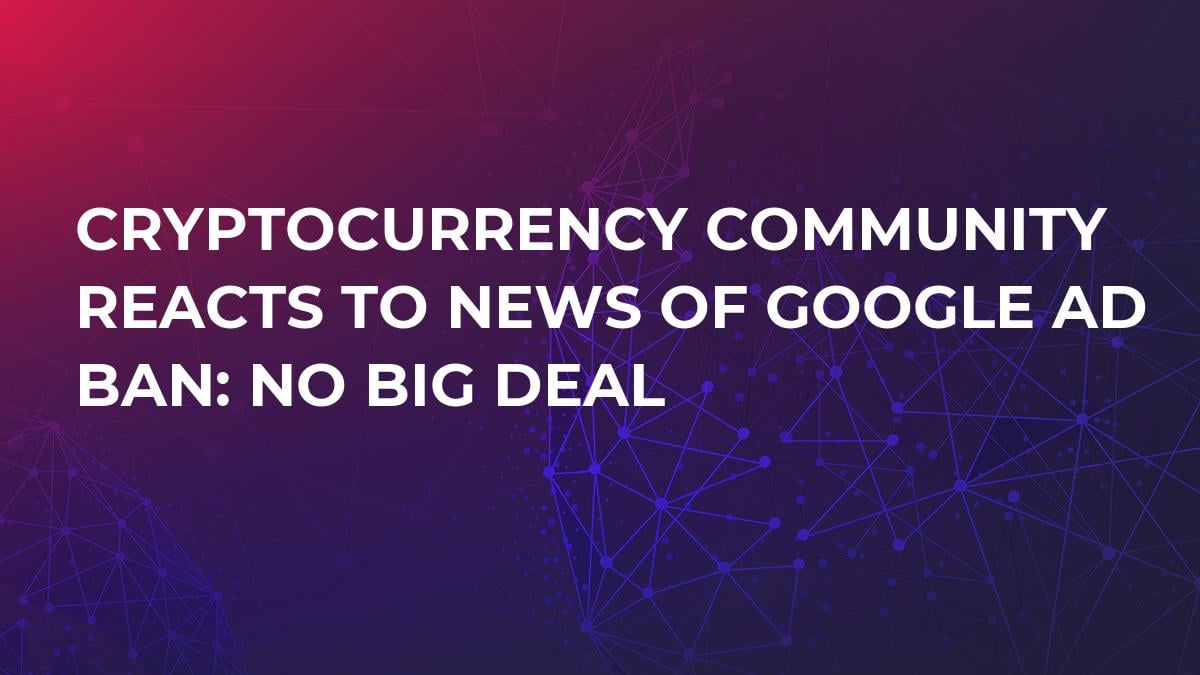 The cryptocurrency community has generally reacted with optimism to Google’s ban of digital currency and ICO ads. But how can this be? A quick perusal of mainstream media outlets makes the situation look dire for Bitcoin, with headlines such as:

CNBC: Bitcoin briefly falls below $8000 after Google says it will ban

These headlines are as amusing as they are inaccurate. For one, mainstream news outlets have no understanding of the ebb and flow of Bitcoin’s market. They assume that every rise and every fall must have a clearly explainable reason, namely, whatever the day’s biggest headline was.

Several experts in the cryptocurrency community have given CryptoComes their opinion on the Google ban, and most of them are cautiously optimistic:

“In the short term, this may benefit the crypto community, which is overflowing with fraud and scams. Longer term, it would be good to have all channels available. Hopefully regulation and self regulation can make it safe and in Google/Facebook’s interest to offer crypto ads in the future.”

"This decision can benefit the crypto community in the long-run amidst the hype, current regulatory climate and the mainstream perception of the community given the pervasive amount of scams we're seeing. [There are] bad actors out there taking advantage of the excitement.”

Daniel Duarte, CTO of Auctus, is concerned about the ease with which scammers can target novices in the community:

"It's easy to set up a cryptocurrency wallet, create a fake website, publish the wallet's public address and collect money from people. Since Google can't analyze on a case-by-case basis and filter the scams, we believe it's better to ban them all. This will not hurt the crypto community, and ultimately is a good thing for less experienced investors.

CryptoComes published an editorial yesterday, skewering Google for their extreme overreaction. Rather than making even the slightest effort to filter out scam ads, the company just banned everything. If they did that with all advertisements, they’d be out of business.

“Today’s decision to ban ads on Google feels like they’re throwing the baby out with the bath water. We use Facebook and Google to educate potential investors and users about a range of topics and opportunities. I worry this punishes the good actors in this fast-growing space and will thus hurt the consumers and investors who are looking for information to make smart crypto investment decisions.”

Users on reddit have pointed out that since Bitcoin doesn’t have a marketing department, Google’s ban of crypto advertisements has no bearing on the currency at all. Rather, it hurts many ICO-funded projects and some altcoins that engage in advertising. However, with thousands of ICOs in the past year, and hundreds of new altcoins having emerged in that period of time, scams likely abound. Anything that can starve scammers of victims is generally welcomed, since the ban does little harm to Bitcoin in the long run.