Crypto Comes in Spanish: At the Eve of Crypto Revolution in Latin America

Cyril Gilson
From Rio Grande to Cape Horn, the Spanish-speaking citizens of Latin America will know much faster what’s up in crypto industry 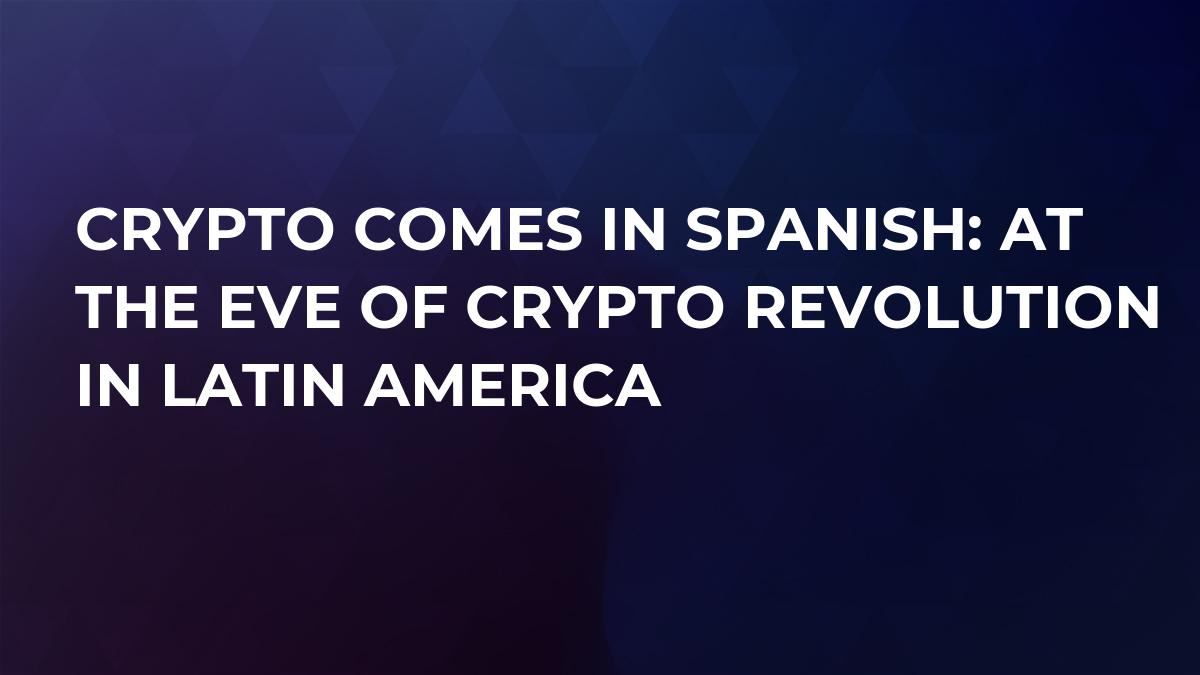 Latin America with its over 650 mln people population has all chances to become one of the most advanced regions in the world for adoption of the next gen tech. Almost 80 percent of the people here live in cities, where technology is ubiquitous and social media are enabling new forms of engagement.

All that opens the way for a new budding economy born on the principles of decentralization, cutting off intermediaries and the new, unrestrained creativity.

The crypto industry is as of yet fledgling but its potential is enormous as show the crypto communities that are actively growing in Argentina, Mexico, Brazil, Colombia, Venezuela and other countries of the continent.

Crypto projects are getting in spotlight supported by the famous Latin American football stars like Lionel Messi in Argentina and James Rodríguez in Colombia.

“This is ... just the beginning of a great technological revolution in Latin American countries that strive for more transparency,” says Pedro Gutierrez, head of Latam Nem.io, one of the most rapidly growing platforms in Latin America.

However, the new ways of industry, commerce, education and self-government in Latin America require the new media that will report the changes in the making. That’s why we’re launching the Spanish-language edition of CryptoComes.

It is headed by crypto community activists and journalists with brilliant knowledge of Blockchain tech and their own history of successful projects. Congratulations on the launch to the editor-in-chief Sasha Ivanova, and all those on the team who are making it possible: Ángel Di Matteo, Jose “Chema” Padrón, Arnaldo “8A” Ochoa, Angelica “Keka” Rincón, Angeline Chacin, Jose Garcia, Pedro Reypuma and Germán Guismondi.

From now on, the Spanish-speaking citizens of Latin America and other parts of the globe will know much faster what’s up and new in the field. Directly in their language, they will get hot news, crypto market reviews, ICO analytics, interviews with major newsmakers, in-depth feature stories and thought-provoking opinion in line with the CryptoComes core journalistic values: clear thinking, accuracy, impartiality and independence.

From Rio Grande to Cape Horn

The Blockchain-based companies will get a support with their arduous task of showing investors the great advantages that crypto tech brings about, which will help its wider adoption from Rio Grande to Cape Horn.

From the start, the readers will learn about the fiat money operations suspension announced by the Colombian exchange Buda.com, about the major coming events like Blockchain Summit Latam Colombia or BitcoinDay Monterrey where crypto investors and community enthusiasts could meet representatives of Rootstock, ConsenSys, Bitso and other companies. In an exclusive interview with CryptoComes Español, director of the major Latam social network Taringa! explains the details of their token sale and the roadmap.

On the educational side, Spanish-language newcomers could learn using our step-by-step trading guides, crypto tips and WikiCoin references that will help them cope with crypto economics.

Stay tuned, amigos, and let’s build a better community together!