Rimma Trukhina
IOTA finally announces the beta release of IOTA Smart Contracts and U.Today speaks with its co-founder about all the exciting news happening at the foundation 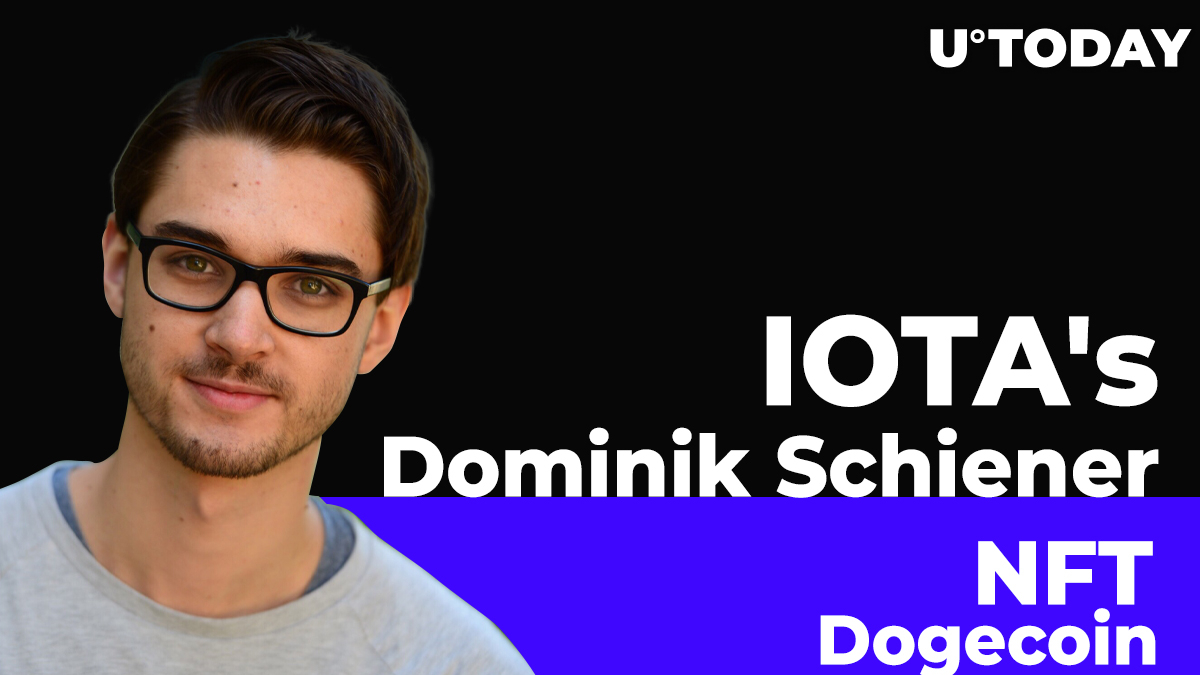 Recently I spoke with Dominik Schiener, co-founder of IOTA. They just announced the beta release of IOTA Smart Contracts. We had a chance to discuss this release and many other important topics, so don't miss this piece!

U.Today: Let's start with the upcoming smart contracts as this is a really big thing right now. What benefits will they bring to the community, in your opinion?

Dominik Schiener: We have to look at it from two perspectives, for both the IOTA community and for the broader crypto community. I think when it comes to the IOTA community, it's really obvious that we've never had smart contracts before. As everybody's probably aware, smart contracts are the main source of innovation with DeFi, with NFTs, and with crazy use cases in so many industries. I think for the IOTA ecosystem and for our corporate partners and the companies we work with, it's a very exciting new toolset to build new use cases and to have more utility for the IOTA token. When it comes to the broader crypto community, we have a strong focus on interoperability because we want to position ourselves in the realm of Polkadot and Cosmos, where we enable this multi-chain future where assets can be transferred between different networks. I think we offer a very exciting new architecture that is scalable and potentially even feeless, where we really want to see innovation from other networks be imported to IOTA and the IOTA smart contracts environment. I think overall we are very confident that we have an exciting new architecture and protocol for the entire smart contracts market.

U.Today: What about NFTs? They are trending right now. As far as I know, IOTA has its own NFT marketplace. What can you say about its progress? How many items have been sold and how many participants have been involved?

Dominik Schiener: The NFT marketplace was more of a demo showcase initially. A few thousand of them were sold by the community. What we are preparing for right now is a bigger entry into the NFT marketplace, also thanks to smart contracts. Smart contracts are necessary for NFTs. Now, with this beta release, we are able to actually play in that market. What we offer for NFTs is the concept of native assets. Our NFTs on our network are basically as secure, as scalable and as feeless as IOTA token. They're able to sit on this layer zero on the IOTA ledger, natively. On Ethereum or Polkadot or other networks, they sit in the smart contract. There are always some friction points on those other networks. Our focus is to make NFTs like first-class citizens that, so to speak, sit on the base layer and can be transferred quickly and with no transaction fees, unlike other networks.

U.Today: IOTA instruments are integrated into some interesting real-world Internet of Things (IoT) solutions. Can you tell us about the most unusual one, or your favorite one?

Dominik Schiener: IoT is definitely a core focus of ours. It was the founding vision of IOTA to enable the machine economy. Since then, we've realized that IOTA is not just about IoT but is much more than that. The machine economy is part of our future, but we see IOTA really being sort of a trust layer for the world to benefit from. Not just for IoT use cases, but also more broadly for finance and data use cases—and now, obviously, for DeFi and NFTs. I think the most exciting use cases are in Africa because there's a lot of potential on that continent for IOTA to be adopted. I would say digital identity is one of those areas where we will have the most impact. Just so you're aware, we have an open source digital identity framework that is going to be finalized before the end of the year. That means that anybody is able to create their own digital identity and have it verified, and then use it within this ecosystem that we are creating—including for smart contracts. Think about being able to log into a smart contract with just your digital identity, not requiring any other information. I think those are the very exciting use cases that we're thinking about for the future.

U.Today: That sounds very helpful. What has been the most exciting aspect of IOTA in 2021?

Dominik Schiener: That's a good question. I think the most exciting one will be the smart contracts release. But before that was the Chrysalis upgrade. Earlier this year, we just had a full upgrade of the entire network, of the entire IOTA protocol, when we removed some of the bad design decisions that we had in the early days of IOTA. For example, we removed the complex cryptography that we had. We made the protocol a lot more scalable and a lot easier to implement by making it more modular. Overall, we made it a lot more user-friendly. That's why we also had the Firefly wallet. I think that was the most exciting thing for this year because it basically became a launchpad for these new innovations, such as digital assets, NFTs and smart contracts to come onto the IOTA mainnet.

Dominik Schiener: No, it was IOTA 1.5. It was an upgrade of the mainnet to this new protocol.

U.Today: You also launched IOTA 2.0 this summer. What's new with this new release?

Dominik Schiener: Version 1.5 introduced some very exciting new concepts onto the IOTA mainnet. It still relies on a coordinator, this entity on the network that helps secure the network and its transactions. With 2.0, we basically completely removed the coordinator, so it's a leaderless consensus protocol. What that means is that every node in the network is basically securing transactions and securing the network. There's no longer dependence on any coordinator or any other centralized entity. It's a fully decentralized network, and it's our future consensus protocol. Over the summer, we released it to the public. We released it with tokenization and smart contracts. For example, this smart contracts release is also going to launch on IOTA 2.0 first because it's sort of like an innovation testnet. Hopefully, before the end of the year, we are going to fully upgrade the IOTA 2.0 network with some of these new modules and improvements so that we can further test and validate the concept before launching a sort of incentivized testnet. That would be the next step for us to go from a testnet to an incentivized network.

U.Today: What are the next steps after that for the IOTA Foundation?

Dominik Schiener: After that, the next step is to upgrade the mainnet and fully decentralize IOTA. I should mention that we are obviously bringing smart contracts and digital assets onto the mainnet. The objective is that before IOTA 2.0 hits the mainnet, we are going to have smart contracts on the mainnet. In the next few months, we allow our ecosystem to develop new innovations, so that by next year, they can launch on the mainnet basically. There's a lot of stuff to do!

U.Today: I have a few personal questions for you, Dominik; I hope you don't mind answering them. What clients do you have in your crypto portfolio?

Dominik Schiener: One hundred percent IOTA. I’m not sure if it's healthy but, as one of the founders, I kind of have to be a maximalist.

U.Today: No Bitcoin at all?

Dominik Schiener: No, I only have IOTAs. I do have some Ethereum tokens, mainly for experimentation. To try out DeFi applications. Mainly, I only hold IOTA tokens. But I usually do advise people to diversify and to have a basket of assets, to try out things.

U.Today: But you don't follow your own advice, haha.

Dominik Schiener: I have to be emotionally and financially invested in IOTA to do the best job possible, right?

U.Today: What are your thoughts on Dogecoin-like tokens, like Shiba Inu, and their hype?

Dominik Schiener: It's 2021, and we have to be very open-minded about this entire market because, otherwise, we’re never going to grasp the current narratives of the market. I think that Dogecoin and Shiba Inu are part of a narrative, “Hey, it's a coin for the people!” It doesn't make any objective sense. It will not be adopted in the real world. But I think what Dogecoin captured was this zeitgeist at a moment in time where everybody was like, “Hey, let's rally behind a project and let's see how far we can go. Because together, we can get wealthy.” That's why Dogecoin was able to capture interest from some billionaires who were too bored or who had different incentives—not making money, but merely having fun.

I think these meme coins are actually quite interesting because they also helped to define the absurdities of the crypto market. I wouldn't dismiss it as something completely stupid. I would simply define it as a narrative on a market that is in a moment of price discovery. Nobody knows the value of these meme coins, and nobody knows the values of some of the crypto assets in general. Even though we have billions of dollars in trading volume, we are still in a very early stage in the market. Meme coins are part of this early phase of crypto. I'm not sure if they will have long-term value. Maybe somebody will build something with those technologies. I think at the end of the day, any coin can have value as long as there's real utility being provided. If Dogecoin is being used to back a stablecoin or is being used to build new smart contract innovations, sure, it will have value in the future. It's always about the narrative and what people believe it to be.

U.Today: I ask everyone this last question: What will the Bitcoin price be one year from now, in your opinion?

Dominik Schiener: The only thing I always speculate on is the Bitcoin price—I don't speculate on the IOTA price, haha. I firmly believe that Bitcoin is going to go above $100,000 this year. I always try to ask myself: What is the alternative to this system that we're building? What is the alternative to cryptocurrencies? What is the alternative to DeFi? Quite frankly, there is no alternative, and adoption is only increasing for the entire crypto market. As long as we keep on innovating, we are going to go much further than most of us can imagine today. Bitcoin is obviously crucial in leading us this way because it's the most fungible, it's the most traded asset there is today. I definitely think that Bitcoin will go above $100K. As for what the future will hold for Bitcoin, I don't know. I just know that the entire crypto market is going much, much, much higher than all of us can imagine. That's what I'm really building toward. That's what we want to enable: so that others can build these innovations on IOTA and other networks.

U.Today: Thank you so much, Dominik.

Dominik Schiener: Thank you very much.