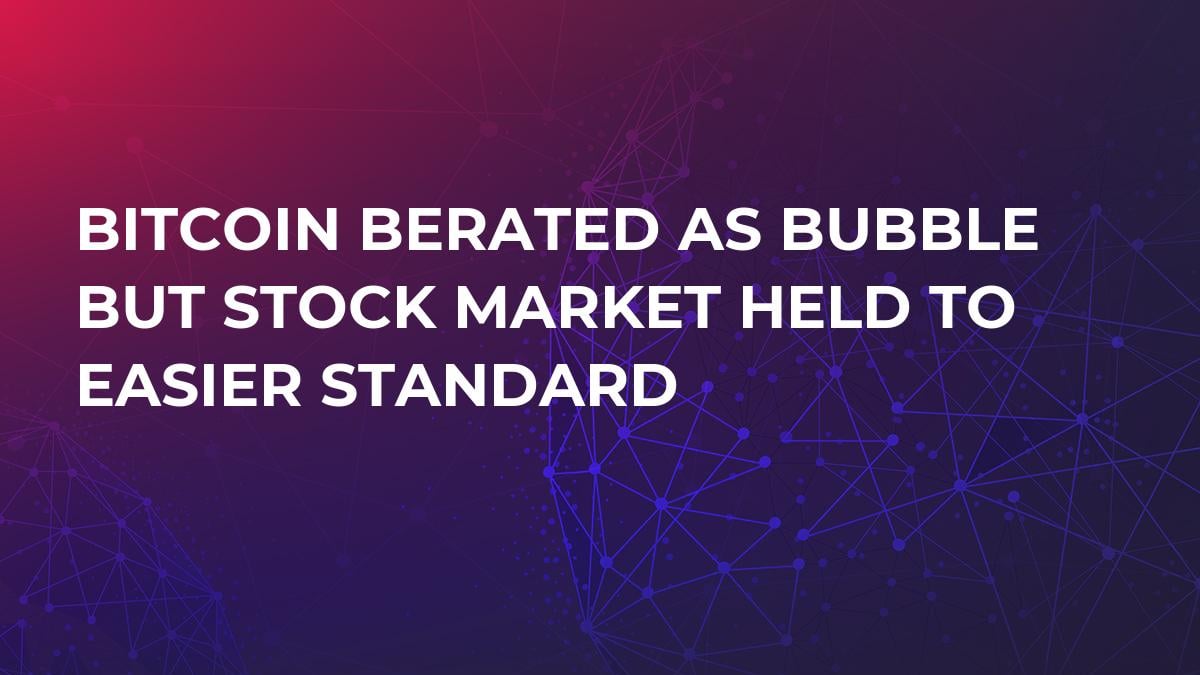 Bitcoin is crashing… again, and pundits once again insist that the bubble has finally popped and that the digital currency is now “dead.” At the same time, global equities markets have taken massive hits, but experts remain optimistic about them. In fact, the Dow Jones Industrial Index yesterday posted an unprecedented 1,175 point drop, after falling 665 points the previous trading day and opening down over 500 points today.

While the fall in the stock market represents an 8.5 percent drop and Bitcoin’s is over 20 percent, the amount of money wiped out of the equities markets is 12 times bigger than that which was lost in the cryptocurrency market. Yet, the calls of crashes and bubbles are still only being aimed at the digital currency market.

A brief look at the history of Bitcoin will reveal an asset that is probably unparalleled when it comes to volatility, and it has never been a secret. Drops of 10, 20, even 50 percent in a day have all been seen before by those who have been around long enough. In fact, there’s a meme in the crypto community that borrows from a famous Marilyn Monroe quote, stating:

If you can’t handle at my 30 percent dips, you don’t deserve me at my 500 percent spikes.

But the problem is that the Bitcoin boom of November through December, which coincided with one of its biggest rallies yet, was fueled by a wave of mass individual adoption. Those new investors who entered at Bitcoin’s high have never experienced any of its lows and are panicking.

The mainstream media are also new to this space and have exacerbated the situation by blindly making calls of bubble pops and imminent crashes.

Meanwhile, on the Dow

Bitcoin is being held to higher standards than the equities markets, it seems, as mainstream media continues to write obituaries for the digital currency. Simultaneously, the Dow Jones has managed to break records not even seen in the collapse of 2008, yet the media’s reporting is far more subdued. The Dow’s 1,175 point single-day decline is actually worse than the day the Lehman Brothers imploded.

There is no question that Bitcoin’s losses are much larger, in percentage terms than the recent drops in equities. However, longtime investors expect much greater volatility from Bitcoin than from stocks. While large rises and drops are expected of Bitcoin, experts have led investors to believe that equities will keep going up, with no end in sight. Pundits are relatively unconcerned about the unusual drop in the Dow, but normal Bitcoin volatility is causing them to sound a death knell for the currency.