BTC, ETH, ADA, DOT and LTC Price Analysis for May 29

Denys Serhiichuk
Have Bitcoin (BTC) and other coins found the support levels to bounce back? 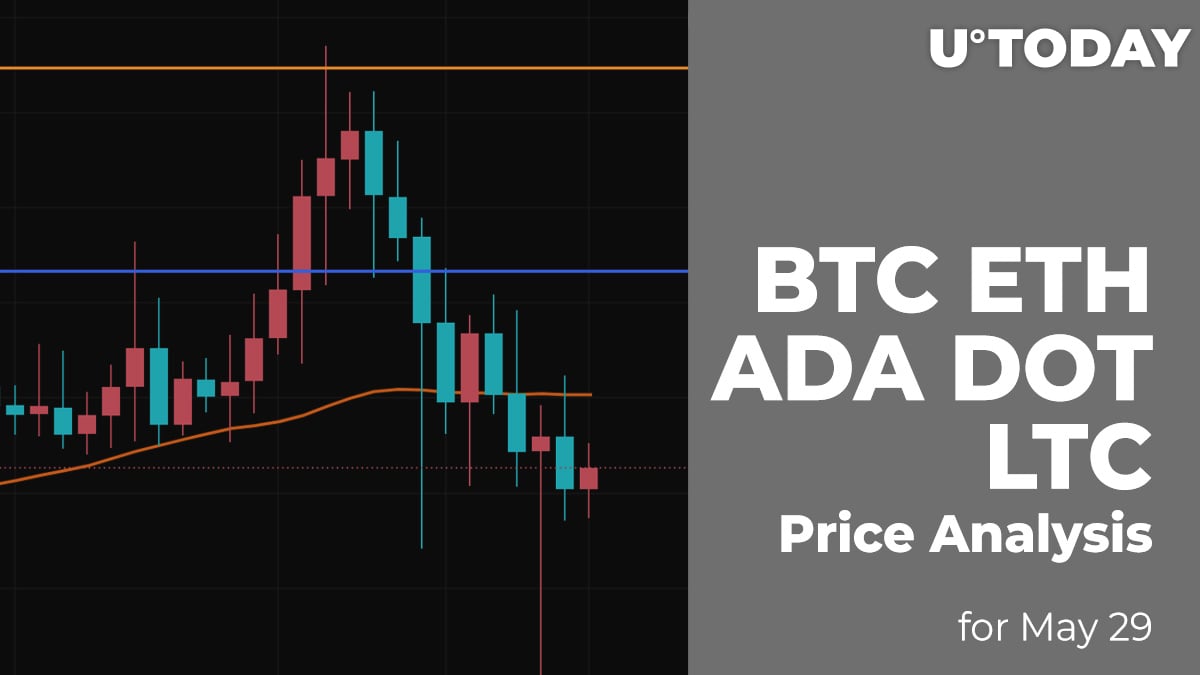 The weekend has begun with the continued fall of the cryptocurrency market as all of the top 10 coins are in the red zone.

On the daily chart, Bitcoin (BTC) is making a retest of the $34,400 level, confirming the ongoing power of the bears. Even though the selling trading volume is low, bulls are not showing any effort to fight for the support level. That is why the next area where a bounceback is possible is the mark of $32,000 for one coin.

Ethereum (ETH) is falling faster than Bitcoin (BTC) with a decline of almost 9%.

Ethereum (ETH) has grown to $2,600 to gain liquidity for a continued drop. The chief altcoin has fixed below the vital resistance at $2,645, which means that sellers have seized the initiative. At the moment, the more likely price action is an ongoing decline to the level of $2,040 which serves an important support zone.

The rate of Cardano (ADA) has gone down even deeper—by 10% since yesterday.

Cardano (ADA) is not an exception to the rule as the drop has continued after a false breakout of the $1.80 mark. On the daily time frame, ADA is on the way to the area of $1.24 where most of the liquidity is focused. If bulls hold this level, a bounceback might occur.

In another case, the decline can continue to the next support at $1.04.

Polkadot (DOT) is the main loser today, decreasing by 11% over the last 24 hours.

Polkadot (DOT) is also following the decline of Bitcoin (BTC) as bulls are not ready to buy back the coin at the moment. As the liquidity is quite high at current levels, sellers might accumulate their positions for one more drop to the support at $15.70, where the crucial level is located.

The rate of Litecoin (LTC) has not declined as much as other coins with a price change of only 4%.

Although bulls are trying to hold the area of $160 as much as they can, bears are gathering strength for a further wave of declines. As the selling volume is low, buyers might seize the initiative in the zone of $144, not giving sellers a chance to update the lows.

Litecoin is trading at $170 at press time.