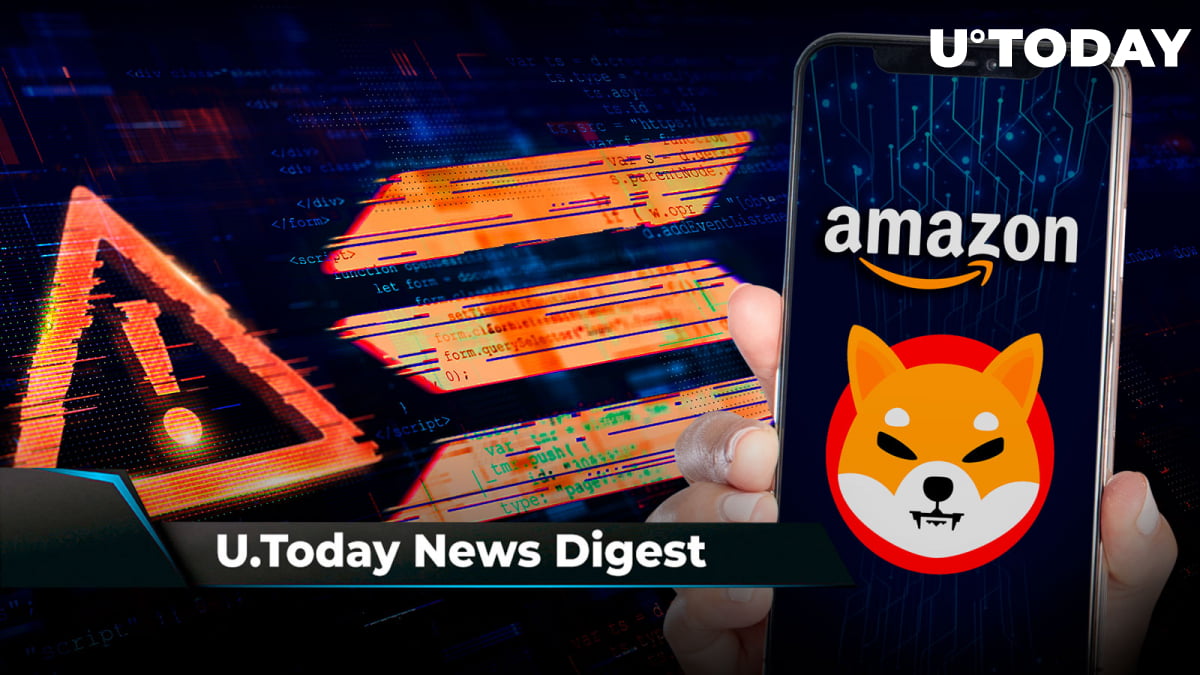 According to a recent tweet by @shib_superstore, the official Twitter account of Travis Johnson's gaming shop, Amazon has proved to be a successful SHIB burner on a daily basis. The Shib Super Store has been incinerating meme tokens via an Amazon affiliate program for a few months now, destroying from 426,621 to 4,212,299 SHIB per day. However, the value of these seemingly huge amounts of tokens is only $5 and $50, respectively. Hence, the maximum sum of SHIB that Amazon can destroy per month is 122,306,201 ($1,500). Overall, the SHIB burn rate does not look good for the token’s price: over the past week, only 0.0002% of the SHIB supply in circulation was burned (1.13 billion tokens worth $13,500).

The founder of the Cardano blockchain, Charles Hoskinson, has taken to Twitter to comment on Solana’s latest multi-million-dollar hack as the rivalry between the two blockchains continues. Hoskinson opined on the incident in his usual stinging manner by posting a GIF of Star Trek’s Captain Jean-Luc Picard doing a facepalm. The picture is reinforced by an ironic expression: "Smart Contract standards...," which, according to Hoskinson, Solana considers itself to be. Following the publication of this bitter tweet, Cardano fans rushed to point out the superiority of their favorite blockchain in the field of security and reliability. Solana fans, in turn, went straight to making caustic jokes about their more modest competitor.

Yesterday, Bitbank, a Japanese cryptocurrency exchange, announced that it added support for Dogecoin (DOGE) and Polkadot (DOT). According to the blog post, the two coins will also be supported by Bitbank’s cryptocurrency lending service. The Tokyo-based exchange was officially recognized by the Japanese Financial Services Agency (FSA) as a registered crypto exchange along with 10 other companies in 2017 as part of the country's support program for fintech innovations. Last month, as reported by U.Today, Dogecoin was also listed by another Japanese crypto exchange, FTX Japan.

Per WhaleStats data, since Sunday, the overall amount of Shiba Inu held by the largest 100 Ethereum whales has increased to $657,836,948 worth of this meme token. However, this figure has been fluctuating as whales have been first selling SHIB, then buying it back again. It is worth mentioning, though, that the title of the whales’ largest crypto holding belongs to Silverway (SLV), which is ranked 5,269 on CoinMarketCap and was valued at $0.0001679 at the moment of publication. MATIC, MANA and LINK are also present on the list of whales' top holdings provided by WhaleStats. Based on Shiba Inu’s price movement, the token spiked by 4.61% over the past week and is currently trading at $0.00001185.