Adoption Begins at Home: 90 Percent of Binance Employees Are Being Paid in BNB

Alex Dovbnya
While an overwhelming majority of businesses remain iffy about paying workers their remunerations in crypto, Binance is stepping up to set a new trend 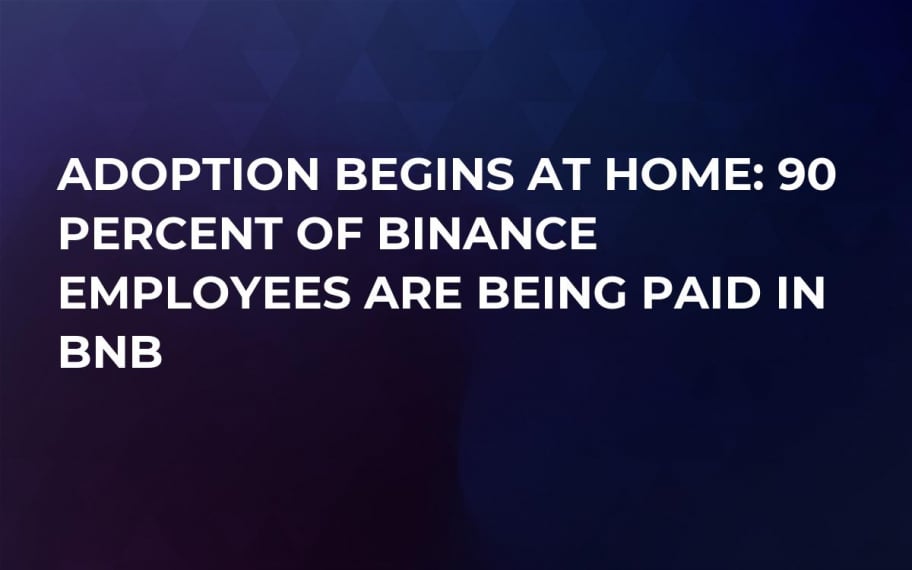 Changpeng Zhao, the CEO of the Binance exchange, is reportedly paying his employees in BNB. By embracing its native token, CZ hopes that other crypto-oriented companies will follow suit, thus increasing the chances of mainstream adoption.

If crypto businesses won’t adopt crypto, who will?

According to a recent CryptoComes report, only one-third of workers would be willing to accept salary in digital assets. However, the situation might be different in the crypto world– as many as 90 percent of Binance employees are receiving their salary in BNB. TechCrunch co-founder Michael Arrington broke the news. Arrington seemingly endorses this policy by calling it ‘smart.’

Just one of the interesting things @cz_binance told me this week at @lcx event: 90% of Binance employees choose to receive their salary in BNB tokens. Smart people.

Binance Coin (BNB) is an ERC20 token that is issued by the Binance exchange. BNB is currently the 17th biggest in the world, currently sitting at $9.88. Changpeng Zhao capitalized on the Binance native token in order to give a valuable example of how important crypto adoption is. The multi-billion dollar exchange is reportedly incentivizing its employees to get paid in BNB. It is expected that more crypto companies will follow in Binance’s lead in the future.
card

Crypto salaries are slowly creeping into the mainstream

An overwhelming majority of investors (about 98 percent) are still certain that Bitcoin is ‘risky.’ According to the abovementioned poll, women tend to be more conservative about means of payment than men (who comprise 75 percent of those who would want to accept salary in crypto).

So far, only a handful of companies outside of the crypto world allow their workers to receive salary in crypto, and they are mainly IT-oriented. GMO Internet Group, a major Japanese Internet provider, is probably the most notable example of such businesses.

As a rule, Bitcoin salaries are agreed upon in advance due to an extremely high volatility of this currency, and it’s up for employees whether to further hold BTC in their wallet. Despite the obvious advantages of crypto payments, such as speed and flexibility, companies are not jumping on the Bitcoin train partially due to emerging tax issues.