Liberland’s Vít Jedlička: “We Are Building Our Civilization On the Boats” 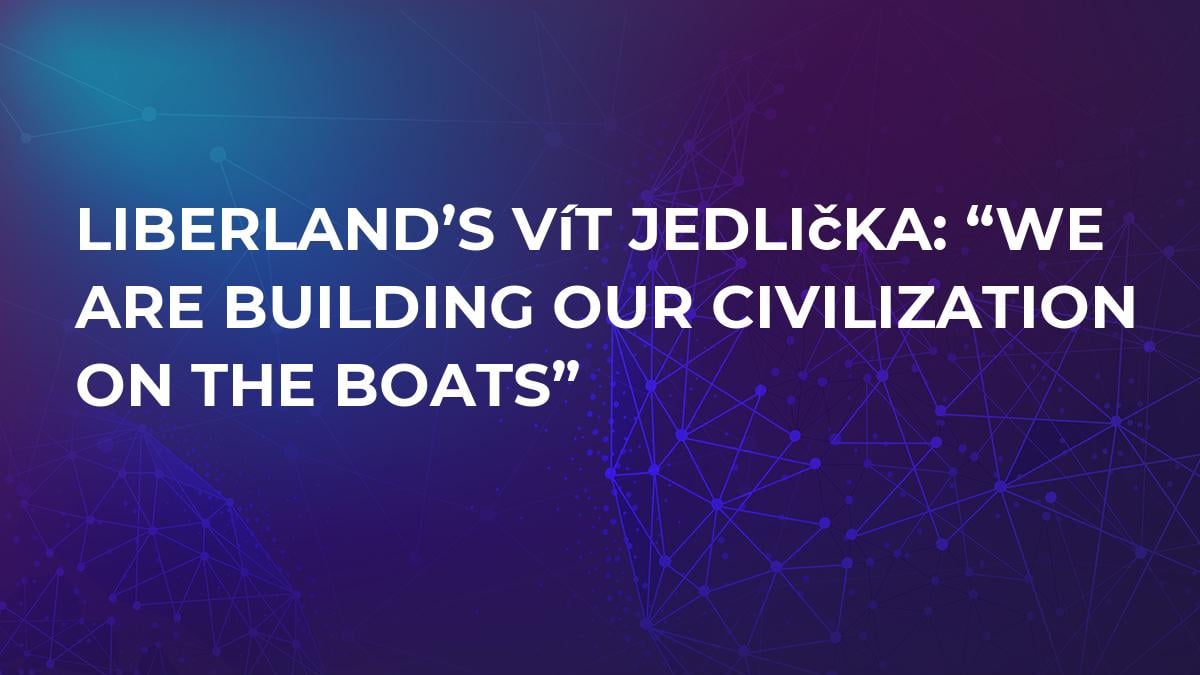 Vít Jedlička is a Czech politician more known as President of Liberland, a libertarian nation located in Europe, between Serbia and Croatia. Somewhat close ideologically to the views of American politician Ron Paul, Jedlička is always on the go, promoting his country based on cryptocurrency. I met Jedlička at the Blockshow conference in Berlin, where we talked about his country’s progress and how one can participate.

Cyril Gilson: Could you describe your country geographically?

Vít Jedlička: Liberland was founded between Croatia and Serbia on a plot of land which is seven square kilometers. So we are three times larger than Monaco for example. It was purposely made there because this place was not occupied by any other country for more than 26 years. Since the split of Yugoslavia, neither Croatia nor Serbia claimed this piece of land which was a very interesting spot. We saw a very great opportunity in that. So we went there, we stuck the flag, we declared the creation of a new country. Of course, we are having some issues with our neighbors, but I think we will be able to resolve them sooner or later.

CG: You bought the land, right?

VJ: No, no, you cannot buy it. It was not claimed or owned by anybody, that was the special thing about it. So we claimed it. You cannot actually build a country by buying land, it doesn’t work like that. Especially if you are doing it from scratch it’s almost impossible. That someone is going to sell you a piece of land with a sovereignty. Historically there is no such precedent that will be done, at least in modern history let’s call it that way.

Cyril Gilson: Tell me what the latest news is in your country, what is going on?

Vít Jedlička: We are growing enormously! We just reached, I think, 520,000 people that are registered and interested for citizenship, with almost 250,000 people eligible citizens out of the group, which is a nice development in the three years since we started. It means the idea is viable, and actually we are growing faster than we were growing at the beginning.

So it’s kind of cool to have an almost half million people nation in support of the creation of the freest country on the planet. That’s something we know works, it attracts prosperity, it attracts capital and makes people happy and prosperous when they are living in a free environment.

We wanted to build a freest society.

CG: Some people think that it’s possible, with all this money, all these billions that are cryptocurrency enthusiasts and investors have they could just buy out. There are ideas circulating, let's buy an island, like in Puerto Rico for instance, some people from the community bought huge pieces of land, not only land like the airport I think. They bought some part of the seaport.

Vít Jedlička: But still they are not claiming sovereignty. The thing is we are sovereign from the very beginning.

CG: What’s currently on this piece of land besides the flag?

Vít Jedlička: We actually do have some issue with Croatia. When they announced we will renovate the buildings, they came with bulldozers and leveled them down. We do have some issues in that sense. But on the other hand we are building whatever we can on the river next to Liberland, so can host up to 200 people now for different events. So we are strongly present in the area, with some 10 boats now that are in the area that we can use. We had a very nice celebration of the anniversary.

So, for now, we are building our civilization on the boats next to Liberland.

CG: Do you do tours? How can one get to Liberland?

Vít Jedlička: Yeah! Easy, the best way is to take Air Liberland from Prague and it will fly you directly next to Liberland on one of the green fields. Then you can take a boat tour.

CG: Do you do guided tours or just inviting people?

Vít Jedlička: Usually we do conferences, so its bigger groups of people coming together, they are of course getting some program pre-planned. But guided tours will be available also at some point. Right now, there is this bigger boat, which was sponsored by our supporters, where we can host 100-150 people easily. There will be a restaurant, there is already a small space, there will be co-working space which we will launch in one month from now. There will be plenty of things that people can do there already.

CG: What does your community do besides gatherings, what other projects?

Vít Jedlička: For example, we have mutual recognition with Somaliland. Right now as we speak I had a meeting with one of our representatives, our Dubai representative, that is pushing things forward in Somaliland. He is also very strong there because he is responsible for infrastructure development there. They are the country that recognized us first.

We have our embassy there now in the capital there, in Hargeisa. We are working now because we signed the memorandum of understanding with their government, we are working on energy, on Blockchain technologies.

For example, housing, with this governments. We are planning a big second official visit with Somaliland to push things forward.

There is great potential to push the country forward especially in the area of tokenizing everything and improving their basic lighting system.

There is where we see great value that we can add to the whole country and push it forward a couple years ahead. Ahead of even other existing countries because it’s easy to implement things in these countries from scratch.

CG: Do you expect more countries like this appearing in the future?

Vít Jedlička: Yeah, we have a couple more state visits lined up with other regularly recognized countries this year.

Vít Jedlička: I cannot tell you because this is a sensitive issue, but I think we can successfully repeat the cooperation that we started with Somaliland with many other countries. Especially Africa and Central America I can tell you that.

We will be the first country that whenever you pay taxes you get something back. Everyone that has contributed to Liberland so far got merits for it. We will also have that as a tradable token. So people will pay taxes and they be able to benefit from it in the future. So it’s not just a voluntary tax system it's a tax which rewards people that pay taxes. These tokens will be good for voting, so you will be able to make decisions with them. I think it’s an interesting concept.

On the other hand, we have a decentralized justice system. We also want to be a leader in that sense. I think that can attract a lot of new people to Liberland.

But also it can help a lot of people that for example cannot settle disputes for many years in other countries they can come to Liberland and have a much faster solution for their issues.