How to Become a Blockchain Developer and Get Great Salary

George Shnurenko
Research states that there’s a widespread demand for Blockchain developers. Are you interested in becoming one? 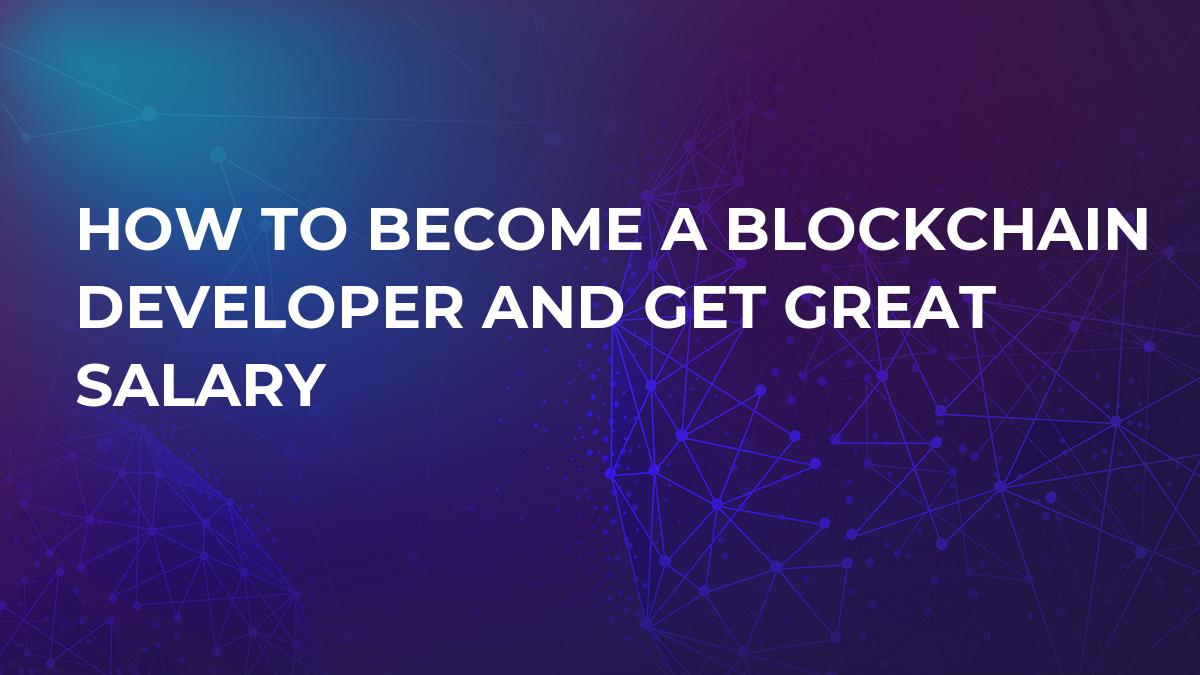 People keep saying that technology is here to take our jobs, but tech keeps proving them wrong. A recent study carried out shows that for every 14 new job offerings which require the skill of a Blockchain developer, only one developer is available to fill this position. This is in addition to the fact that the $/knowledge ratio for the role soars daily.

What is a Blockchain developer required to do?

A Blockchain developer definitely plays a major role in the digitization of our world today. Think of developments such as cryptocurrencies, smart contracts, distributed databases, platforms for ICOs, and e-voting systems. All these are possible because we have experts who are adept in Blockchain technology.

To start with, there are certain fundamental concepts which you should have a good grasp of before considering a career as a Blockchain developer. Some of the concepts are explained below.

Depending on the applications you’ll be building, you might be required to learn other aspects of Blockchain. For example, if you’re thinking of how to become a Blockchain developer and your interest is in ICOs and financial services, you will require training in the economics of cryptocurrency. In fact, you might want to learn about other popular currencies in the sphere. Acquire knowledge about Bitcoin here.

Considerations for a Blockchain developer

As earlier stated, a Blockchain is renowned for the strict adherence to security, anonymity and speed f transactions. This might make it appear as though the demands of the job are enormous. However, it really isn’t. You just need to take note of certain important factors in the process of coding. What are they?

1.The security of the Blockchain network

One thing you should note is that the code is open-access, readily available to the public. This means other Blockchain developers with sinister plans can easily check your code for bugs and vulnerabilities. If there’s any slight chance to exploit the network, it is possible that they hack into the system and disrupt a lot of things. This is why Blockchain development takes a lot of time- code testing, debugging, and deployment.

2.How to manage the resources

Once we’ve sorted the issue of security, another challenge is getting how to keep pace with the network. Remember that the system is decentralized and it requires consensus to validate transactions. Think of what will happen if the resources are not well equipped to cater to remote queries.

3.The performance of the Blockchain network

When you think of Ethereum, Ripple, NEO, one thing that comes to mind is the supersonic speed which is at play. This is why they find application in financial institutions and the reason for the public’s acceptance of the technology. As a Blockchain developer, know that there are certain tasks which are parallelizable and others aren’t.

For example, it is possible the digital signature verification task is one which is parallelizable since it only requires the key, transaction, and signature. But others might not share this attribute.

Isolation is what causes deterministic behaviors to be upheld. To explain this, let’s reference our hashes. In the same way, we had variables which were immutable (e.g. X + Y = Z), a hash shares the same attribute. Hash functions are regarded as deterministic and this is because they cannot be altered.

According to market analysis, here are three skills every employer wants in a Blockchain developer.

When you consider the fact that companies like Bank of America, JP Morgan Chase, and other highly esteemed corporations are exploring the Blockchain market, your eyes will be open to the opportunities that abound. It is reported that Blockchain developers in the US earn almost $130,000 yearly.

The general average reported was $91,528 and this beats the earnings of an engineer and an application developer ($89,091 and $85,637 respectively). This is the result of extensive data collection and processing carried out by Burning Glass Technologies.

One thing is certain, you won’t become an expert overnight. Neither is there any assurance that you’ll begin to take home millions of dollars monthly. In fact, as opposed to what the media feeds, you should tone down your expectations and be ready to go through several rough patches.

The suggestions offered here do not work like magic pills. You do not just take it and then you instantly see the results, rather, it takes time, patience, and perseverance. Keep at it, and you will be proud of the blockchain developer salary you earn in the long-run.

Have a great run!