Dmitry Cake
New week- new trend? Bitcoin and NEO reach local maximums over the weekend but are likely to require a recharge 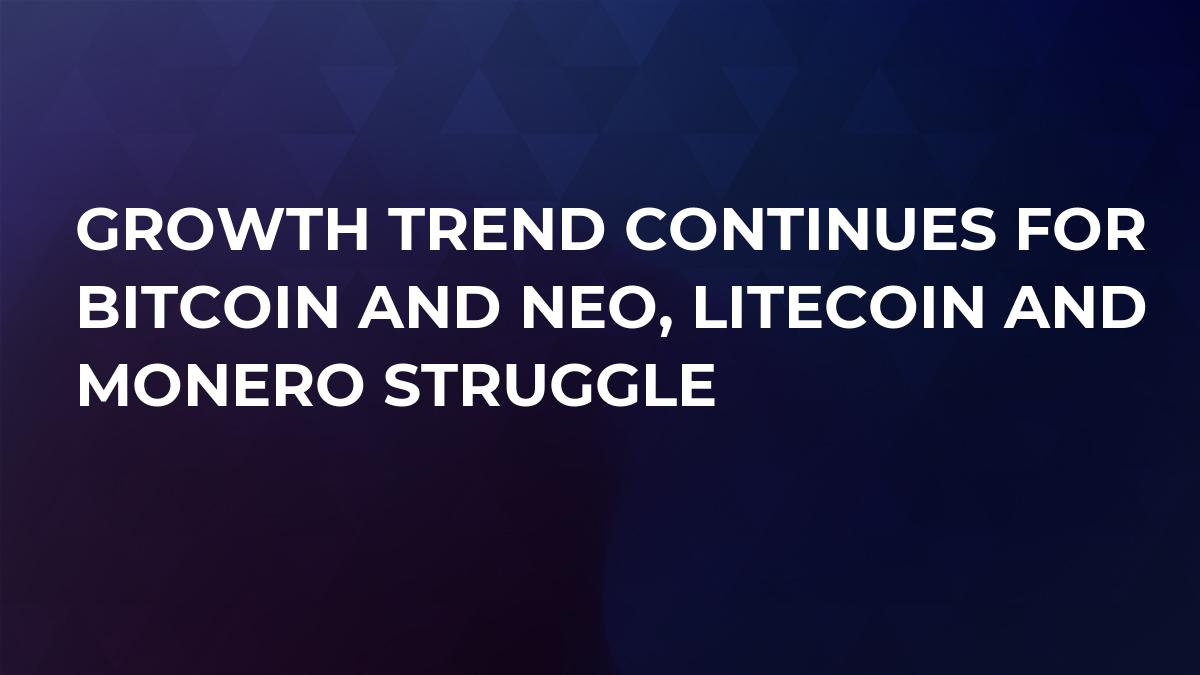 Another trading week begins, and we can’t wait to find out what news it will bring for investors. Perhaps it's time for a local correction? Or will we see a continuation of the trends that started last week? This scenario, at any rate, would fully satisfy the bulls- during the weekend, the market continued to climb almost without fallbacks and Bitcoin price increased to $8,460.

The total capitalization has almost reached the level of $340 bln, which is $10 bln more than on Friday.

The increase is due both to Bitcoin and to the top altcoins, as well as some coins of the second tier. Unlike on Friday and Saturday, by the beginning of Monday, we are not seeing 30-40 percent “rockets” for individual assets. In the overwhelming majority of cases, average daily growth rates do not exceed five to seven percent.

Bitcoin dominance has not changed over the weekend and is 42 percent, another confirmation that the market growth is balanced, without disproportion between the main asset and altcoins.

The young growth channel, which we pointed out in our Friday survey, received several confirmations and one extension. Now, it is constrained from the top by the mirror level, which can be not only horizontal but also inclined. Movement in this channel allowed the price to reach the target range of $8,300-$8,500 quite easily, followed by a fallback to $8,000 which the buyers met with equanimity.

The main task for the bulls now is to close out the day no lower than the previous 24-hour candle- that is, at the same level of $8,000. If the expectation becomes drawn out and the parties show hesitation now when Bitcoin is trading at $8,100, the initiative can move into the paws of the bears.

We believe that Bitcoin will continue to move in the upper register of the ascending channel today. The immediate goal of the bulls is the resistance zone at $8,600, followed by $9,000-$9,200, where the really heated battle will unfold. While our views on the situation remain bullish, a possible local fallback can be viewed as an opportunity to build up long positions, which is what we recommend to our esteemed readers as well.

Unlike its parent, Litecoin has not yet formed an ascending channel which could be relied upon. Instead, we see a cascade of rising minimums that are forming a section of a parabola.

Even the news about partnership with the TenX payment system could not help the asset- the memory of LitePay’s failure is still fresh in investors’ minds, and they are hesitant to fall for the same trick twice.

During the weekend, the maximum price was $134, which was followed by a correction to the 0.236 Fibonacci grid level. A decline to the 0.382 level of the same grid, which is $125, is not compulsory, but permissible. Even in that case, Litecoin will continue to build a basis for further growth. A more significant price drop won’t break the current picture of technical analysis but will indicate an extreme buyer weakness.

As for growth targets, the first is $137, which coincides with a powerful mirror resistance level. In case of overcoming that- it’s on to the region of $150. However, it is essential to understand that Litecoin can achieve its goals only under the conditions of full market growth. At the moment, the asset can’t swim against the current.

Once again, Monero’s chart reminds us of Litecoin- the main conclusion here is the same: bulls have not yet managed to form an ascending channel. At the same time, we see periodic bursts of purchases, not accompanied by strong subsequent fallbacks, which may indicate that big players are entering long positions.

A slight correction to the level of $190 completely fits into the logic of continued growth, but it’s best not to let sellers go lower- in that case, the lateral trading figure will be broken.

On the other hand, for a strong price increase, there are two obstacles- the boundary of a long-term descending channel and a zone of strong resistance at $208-$220. At the moment, Monero is at a crossroads, and we recommend that readers avoid hasty investment decisions.

Compared with other assets, NEO is demonstrating the most confident growth. On the chart, we see a clear growth channel, in which the price has been moving for 10 days straight. At the same time, the steepness of the channel imposes certain demands on the bulls, which will not be easy to fulfill. Therefore, we believe that in the near future the channel will be broken downward.

In this case, a correction to the 0.5 value of the Fibonacci grid is possible- into the mirror-level region of $62.4. While bullish sentiment prevails on the market, we don’t see any reason for the price of NEO to fall lower than that. In the asset’s analysis, the easiest thing to see is the perspective growth target- it’s clearly visible at $80. Just how quickly it will be reached is a much more complicated question, but we believe that it will not happen in the next two days. As stated above, today we expect a minor correction and horizontal trading in the range of $62-$70.