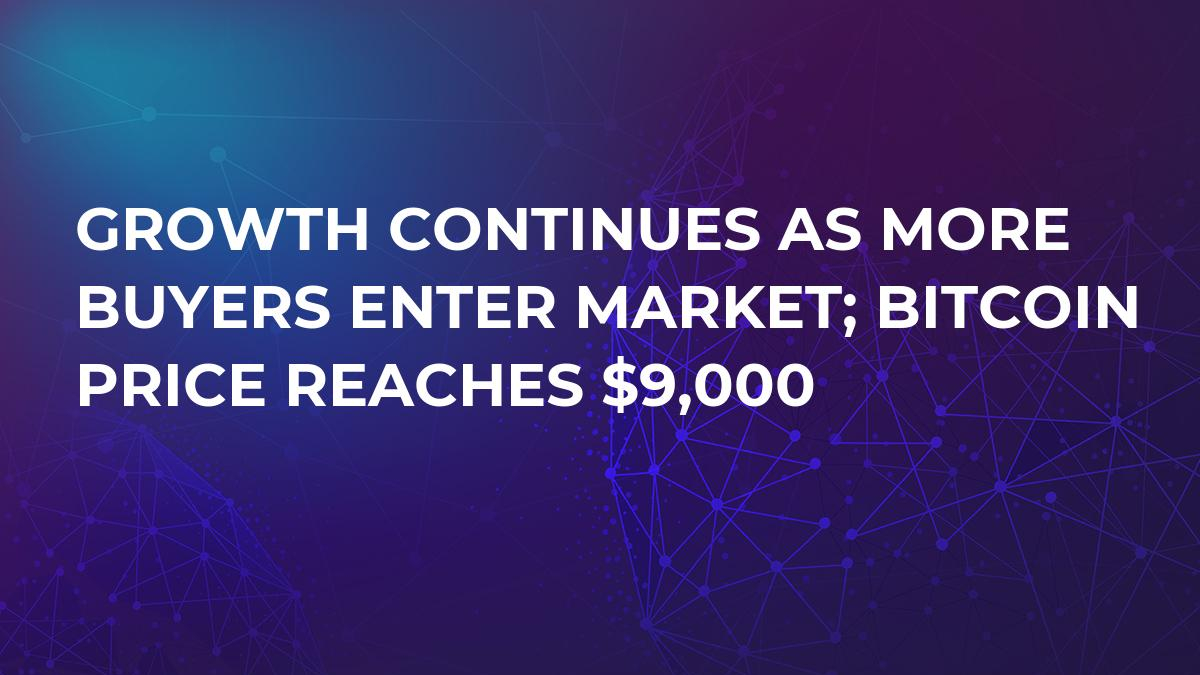 Tuesday turned out to be another day of purchases, and despite the caution that not only we exercise in our estimates, but also market participants in their trading operations, there can be no doubt about the uptrend. History is repeating: first smart money enters the positions, then professional traders and investors, and only then — the crowd.

We observed the entry of smart money: large volumes were being bought at different levels and at a leisurely pace, without significantly affecting the price. Professional traders turned the market around, since the culmination of the correction could be determined by conducting a thorough and competent technical analysis. In a little while the crowd, finally assured of the trend change, will also return to the market.

Altcoins closely follow the trend in the absence of significant news

Meanwhile, Bitcoin is trading at $9,000, and market capitalization has reached $350 bln, having increased by $15 bln in the past day. Altcoins are maintaining their correlation with the underlying asset and are almost universally gaining in price, albeit not as rapidly as yesterday or the day before.

IOTA and Cardano are in first place with an increase of 10 percent; most of the other assets in the top 10 gained 4-6 percent, similar to Bitcoin. EOS and Ripple are taking a break after a two-day rally: the former hasn’t changed in price, and the latter even managed to lose 1.5 percent.

In the media space, everything is quiet - no news has appeared in a day, at which we would like to draw the reader's attention in the context of its possible impact on the market situation.

Bulls can be congratulated on achieving a local victory: by Wednesday they have not just broken through the descending channel, but found a foothold above it, while the maximum value of Bitcoin in the past day was $9,040. Now the boundary of the channel becomes a support, and due to its negative incline, a slight price decrease to $8800 will not post a threat to further growth.

The volume profile data tells us that we are entering a zone of significant resistance. In the course of a month, a huge number of transactions took place in the $8,900 - $9,400 range, in the end leading to a correction. This means that there will be players again who will want to sell the asset at the same prices. At the same time, buyers are benefitted by a young ascending trend, in which the price is likely to move until it reaches $9,400.

A more detailed, but no less hopeful picture is revealed by the hourly chart. It clearly shows that the retest of the boundary of the descending channel was successful, and subsequently the price pushed away from it cheerfully, confirming the strength of the bulls and the significance of the support.

Further on the path to growth there is an entire set of resistances in the form of the upper boundary of the local (blue) and the lower boundary of the previous ascending (green) channel. A return to it will give bulls occasion to celebrate their triumph.

The first growth target, described in yesterday’s review, has been reached. The next one up is $9,400. Today we are expecting a day of lateral price movement — buyers need time to restore their strength.

However, if even in the current situation the upward movement will remain active, and within the next 24 hours the local and global ascending channels will be broken, we can announce the bears’ capitulation with a clear conscience. We however recommend that our readers wait until the fallback to $8,800 before augmenting long positions.

At the time of writing, the price of Litecoin is $173. Throughout the March correction, the asset was doing quite well compared to most altcoins, and sometimes showed better results than its forefather Bitcoin. Nevertheless, this does not cancel the fact that the price is inside a descending channel, though anxiously trying to break out.

The break through the channel is just a matter of time. It will be much more interesting to see how active the upward movement will be. Just like with Bitcoin, there is a number of constraints: first, the turbulence zone $175 - $190, where a lot of transactions took place. Second, the mirror level of resistance, which was formed during the February correction.

If buyers can overcome these obstacles quickly, they will be rewarded by achieving the $195 target. This target has two confirmations: first, it’s the value of the 1.618 Fibonacci extension, and second — it’s the horizontal mirror level.