Dow Jones Tumbles Harder than Bitcoin, Not Called a Crash

Alex Dovbnya
Despite the Dow Jones breaking records in its collapse on Black Monday, people have been worrying more about Bitcoin’s fall 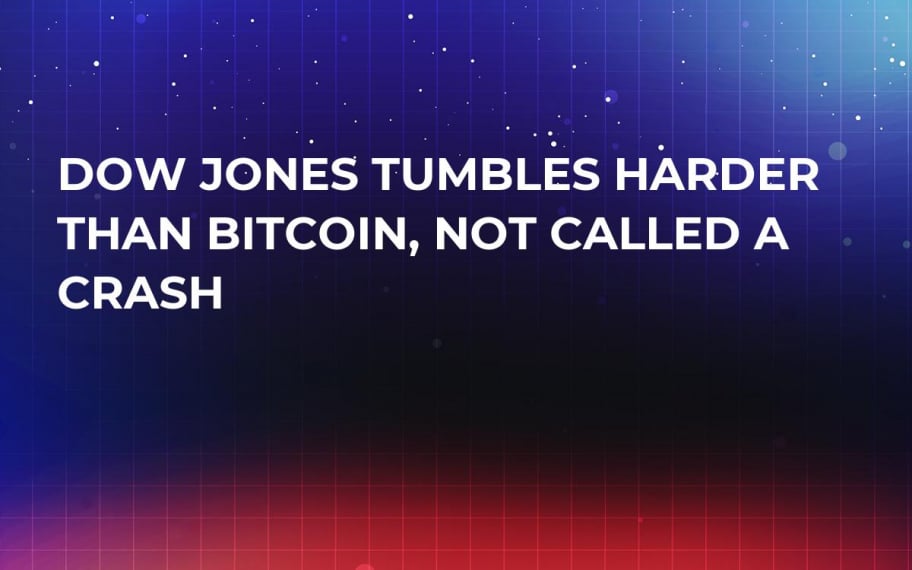 While it was a gory day for the Bitcoin markets on Monday, the Dow Jones Industrial Average broke its own records in terms of poor performance, dropping more than 1,000 points for the first time ever.

However, there has been no calls of burst bubbles or stock market crashes after this drop in the Dow index, those calls have all been aimed towards Bitcoin from mainstream media sources and this is despite Bitcoin’s drop not even being the biggest decline for the digital currency.

Black Monday for the stock market

Across the board, there were only two stocks in the S&P that were up on Monday, and that also saw all of the Dow’s 30 members falling. Overall, for 2018, birth indexes are down which has seen all the gains that were heralded earlier on erased.

This fall on Monday for the stocks essentially saw $300 bln in market value wiped off in one day.

One example of a tumbling stock was the parent company if one of the better-known stocks, Google. Alphabet, lost a massive 40 bln of its market cap for the second day running, equating to a loss of 80 bln over two days for its investors.

Bitcoin’s loss over the same day was equated to a mere 18 bln with the drop measuring up to 23 percent. This drop is substantial in terms of most stocks and other assets, but it has mostly come to be seen as expected from the volatile cryptocurrency.

Bitcoin’s fall from its incredible highs of mid-December has seen many sources level claims of a burst bubble towards the cryptocurrency. And as the drop continues the voices grow louder.

Not a stock crash

However, for the stock market, there is no such proclamation of a crash or a bubble burst, even though this 1,175-point drop on paper looks worse than the worst days during the 2008 collapse.

Market crashes on the stock market are defined more by the abrupt and rapid decline of 20 percent or more. The 1929 Black Tuesday crash, 1987’s Black Monday, the dot-com bust in 2000 and the ’08 financial crisis all had that in common.

The Dow is now sitting at a drop of 8.5 percent from its all-time-record of 26,616.71 last month. This is being called a correction.

While Bitcoin’s percentage and numbers are greater, they are more frequent and not so surprising, yet there remains an argument over whether this is a crash or rather just a correction from the Bitcoin all-time high of December.