Darryn Pollock
If 2017 was the year of Bitcoin, 2018 is kicking off with interest in the digital currency fading 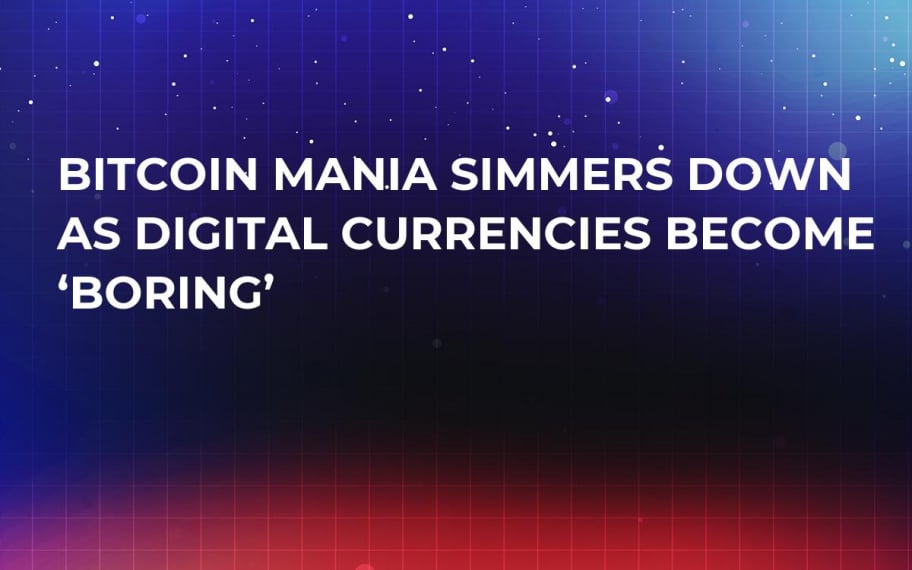 Bitcoins’ booming 2017 which saw it rally from $1,000 to 20-times that before settling at just about $13,000 was a rollercoaster ride that everyone either wanted to be on or at least was talking about.

Now, as 2018 winds it was through the first quarter, the Bitcoin mania that was felt in 2017 has died down. The digital currency is becoming a bit boring, according to some commentators, and this loss of interest is reflected in its current lull.

No longer Risk-Free, Get Rich

There was a time, especially in the run-up to December’s all-time high, where it looked like anyone could enter the Bitcoin market and instantly be in profit as the coins smashed through $1,000 barriers at will. But, things are not like that in 2018.

“The general public is now realizing that this is not a risk-free, get-rich-quick, investment opportunity and general interest has since diminished,” said Lucas Nuzzi, a senior analyst at Digital Asset Research.

The price has stalled and fluctuated between $8,500 and $11,300 with a lot more downs than ups. This is not the same selling point the coin had last year. Talk of Bitcoin is down, as is Google searches, a pretty reliable indicator of interest and price potential.

Google searches are down as much as 82 percent of their highs in December, according to Google trends. Tweets that mention the coin peaked Dec. 7, at 155,600, and are now down to about 63,000, BitInfoCharts says. And the number of Bitcoin transactions is off 60 percent from its record on Dec. 13, according to Blockchain.info.

Google itself also has clamped down on cryptocurrencies and ICOs, stating it would follow Facebook in implementing a ban on advertising of these types of coins.

“The story with Bitcoin is pretty straightforward,” said Roger Kay, president of research firm Endpoint Technologies Associates Inc. “It went up fast, and then came down even faster. Consumers who flocked to it late got burned. They are in the shadows now, licking their wounds. And others contemplating how to get rich quick are acutely aware that what goes up can come down, and maybe Bitcoin isn’t the way to go about it.”