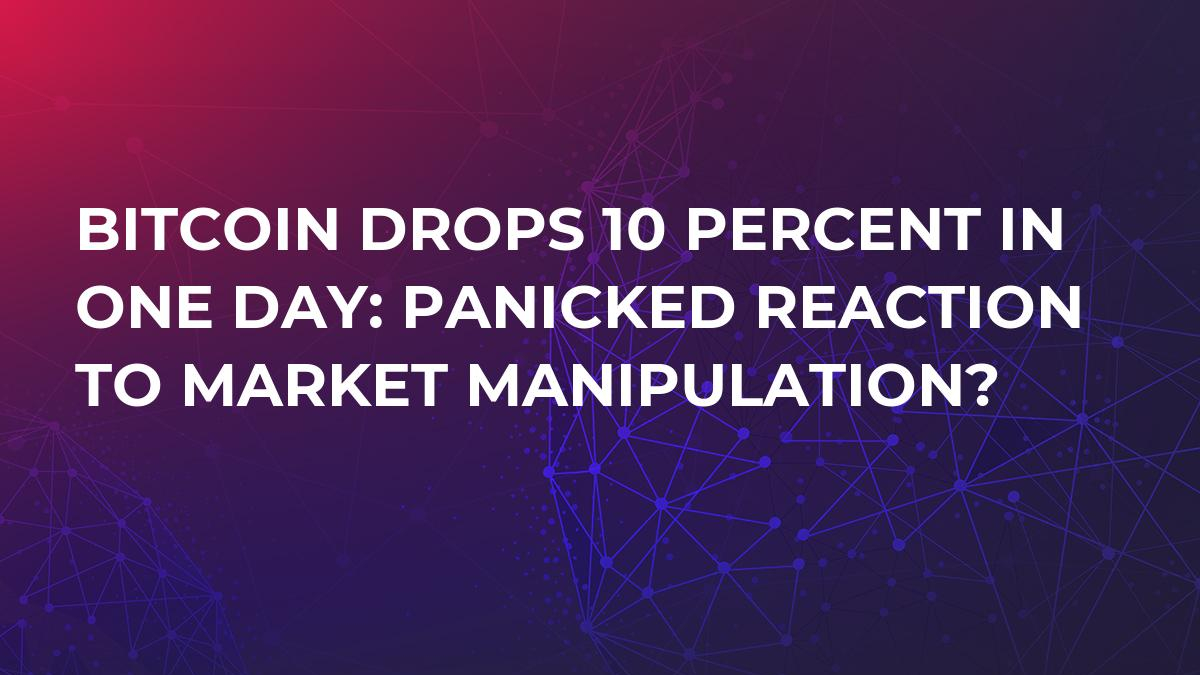 "Black Wednesday" — perhaps, that's what the previous day will come to be called in the coming weeks, until the market recovers from the blow.

A detailed assessment of the events and a full debriefing will be attempted at a later point, when the graph, like a seismometer, reveals more data. For now, we can state the facts and engage in some operative analysis..

On March 7, the bears fell upon the market like a bolt from the blue, and within an hour beat Bitcoin price down from $10,600 to $9,800. Considering that for most participants this kind of comeback was a complete surprise, the other assets reacted painfully, as could be expected.

In the same hour, market capitalization fell by $40 bln and at the time of writing makes up $395 bln, which corresponds to the mid-February value. Bitcoin dominance reached 42 percent, but at what cost!

This time, the informational trigger for the sudden and hardly predictable fall was delivered by two pieces of news and a few rumors. First of all, there was the hacking of Binance exchange accounts — presumably with the help of a fishing site or a trading bot API.

Second, the US Securities and Exchange Commission (SEC) tightened the rules for cryptocurrency exchange licensing, equating them with traditional exchanges. Very soon, the net began teeming with other news and bold conspiracy theories, but anyway the push was already given by the original two announcements.

It is curious that some altcoins turned out to be more resistant than Bitcoin — we noted this trend yesterday. One of these assets was Stellar, which lost just 6.5 percent against Bitcoin’s 10.5 percent, followed by Ripple with a decline of 7 percent and Litecoin with 8 percent.

The other altcoins suffered more damage — Bitcoin Cash, NEO and EOS lost 13 percent each, and Cardano is looking worse than the rest, losing 18 percent.

Yesterday we wrote that if buyers can’t hold the level of $10,200, we will have to consider the scenario of further correction. The minimum price of Bitcoin in the course of trading was $9,380, and the drop was stopped by the intersection of the ascending channel, long term descending channel and the mirror support-resistance level.

At the same time, the maximum volume (which, by the way, is comparable with the volumes at the end of the global correction) was traded in only 15 minutes! In this situation, we are seeing a possible manipulation of the asset by a big player, for the subsequent re-purchase ahead of rapid growth.

The next few days will show whether this theory is right or wrong, but for now we explore all possible variations of price behavior.

The danger of this maneuver is that Bitcoin price will once again end up inside a global descending channel, which was broken not on the first attempt and with considerable difficulty. Further, everything will depend on the success of re-testing the lower channel boundary.

If a less precipitous price decline compared to other assets can be called a victory, then we can congratulate Ripple. A backup store of resistance was formed by previous active growth, when price grew by 20 percent in 24 hours.

Although this growth was completely overtaken by the fall, so far XRP lost only 7 percent below the key level of $0.90. A soft landing was ensured by the intersection of the strong 0.618 level and the boundary of the descending channel.

To assess the possibilities of further price movement,  it is necessary to closely monitor Bitcoin behavior. As far as the target for Ripple itself, everything is quite simple.

Transition to growth for XRP is dependent on two factors: first, the recovery of Bitcoin, and then buyers will need to find the resources to hold the price above $0.90. We’ll remind our readers that from the point of view of technical, as well as fundamental, analysis, Ripple is a promising asset. Just yesterday, the company entered into another agreement with a consortium of Japanese banks.

Never mind that the role of the XRP token itself in bank applications remains unclear — consistent attention in the media will help the asset reach new highs, sooner or later. Therefore, growing long positions is not only possible, but advisable — on the condition of reaching the decline targets, of course.