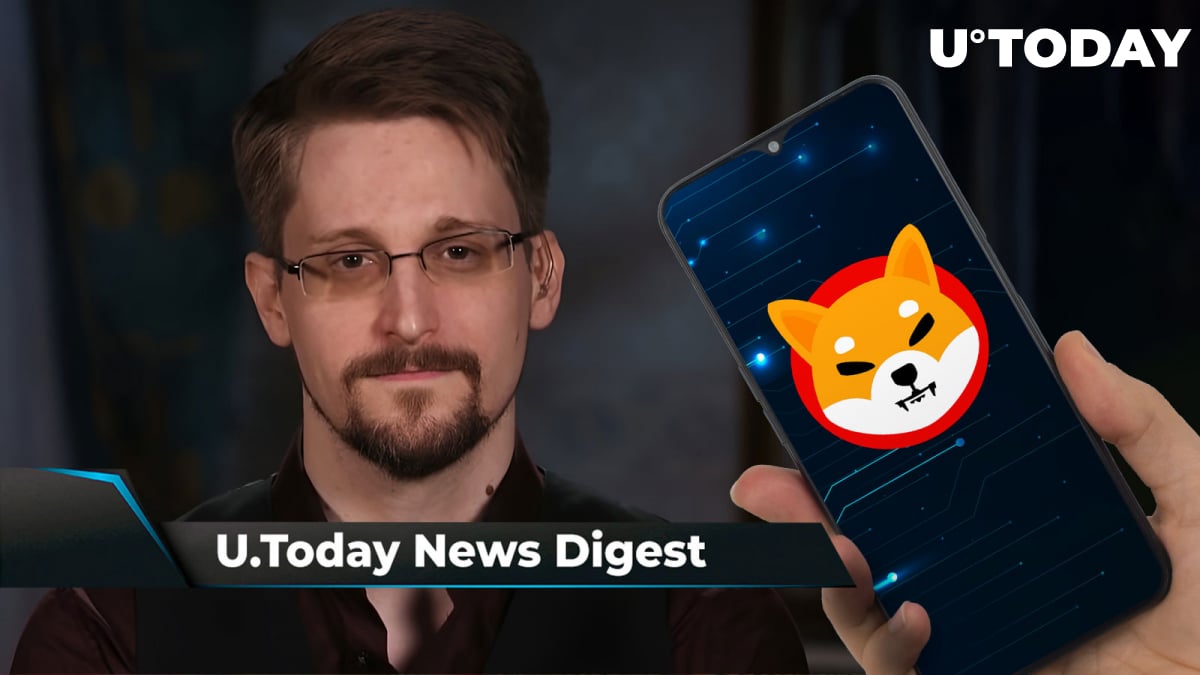 Edward Snowden, former CIA employee, has taken to Twitter to share his view on the cryptocurrency industry. At the same time, he warned his followers that his tweets should not be viewed as financial advice, as he has “zero financial education.” Snowden believes that the market will retrace back a bit and reach its previous price levels. In another tweet, he wrote that the industry should shift toward safe DEXes after the situation with the FTX catastrophe. Snowden also shared a BTC price graph with his tweet from March 2020, in which he stated he feels like buying the king crypto. The tweet preceded Bitcoin’s historic rally that dragged it to the current all-time high of $69,000.

As shared by shibaplay_ Twitter user yesterday, anonymous whales shifted almost 900 billion SHIB. One of these transfers worth 154,724,609,251 SHIB was made from a Binance wallet to an anonymous address, which was likely a purchase. The largest lump of meme coins, 623,469,191,708 SHIB, was moved to a wallet that is now holding 4,068,285,306,457 tokens. Meanwhile, Shiba Inu reached two significant milestones: this weekend, the number of SHIB holders grew by 8,000 in a single day, pushing the overall figure to 1,259,610. According to WhaleStats, the current holder count is 1,268,532. The second important update is that the Metaverse team has unveiled new concept art for the metaverse that is being built: the Dune hub.

I'll keep getting DOGE and SHIB, other meme coins in question: David Gokhshtein

David Gokhshtein, crypto influencer and founder of Gokhshtein Media, has once again expressed his support for the two leading meme coins, Dogecoin and Shiba Inu. In a recent tweet, he stated that DOGE and SHIB are the only meme cryptos that he will continue to buy, while others have to “win him over.” Earlier this month, Gokhshtein said that he is big on both Shiba Inu and Dogecoin. Even though he is holding “as much BTC and ETH as possible,” Gokhshtein stated that he "vibes better" with the DOGE and SHIB armies. He pointed out that holders of meme coins and of major digital assets, like Bitcoin and Ethereum, are certainly different.

On Monday, Nov. 14, the XRP token spiked 10% to highs of $0.378, with the upward trend continuing until Tuesday. The sudden rise was caused by speculation of a settlement in the Ripple-SEC lawsuit, as Fox Business viewers spotted a chyron that stated that the lawsuit would be settled on Nov. 15 during Maria Bartiromo's show, "Mornings with Maria." Later on, however, Fox Business news correspondent Eleanor Terrett tweeted that the report was false, referring to a brief with a Ripple spokesperson. The situation puzzled the XRP community and raised several questions, such as whether it was an accident or if it indicates a settlement may actually be on the way. XRP is now trading at $0.374.