Yuri Molchan
Over the night, the crypto assets market declined by nearly $16 bln of its value, seeing it fall from over $120 bln to $107 bln 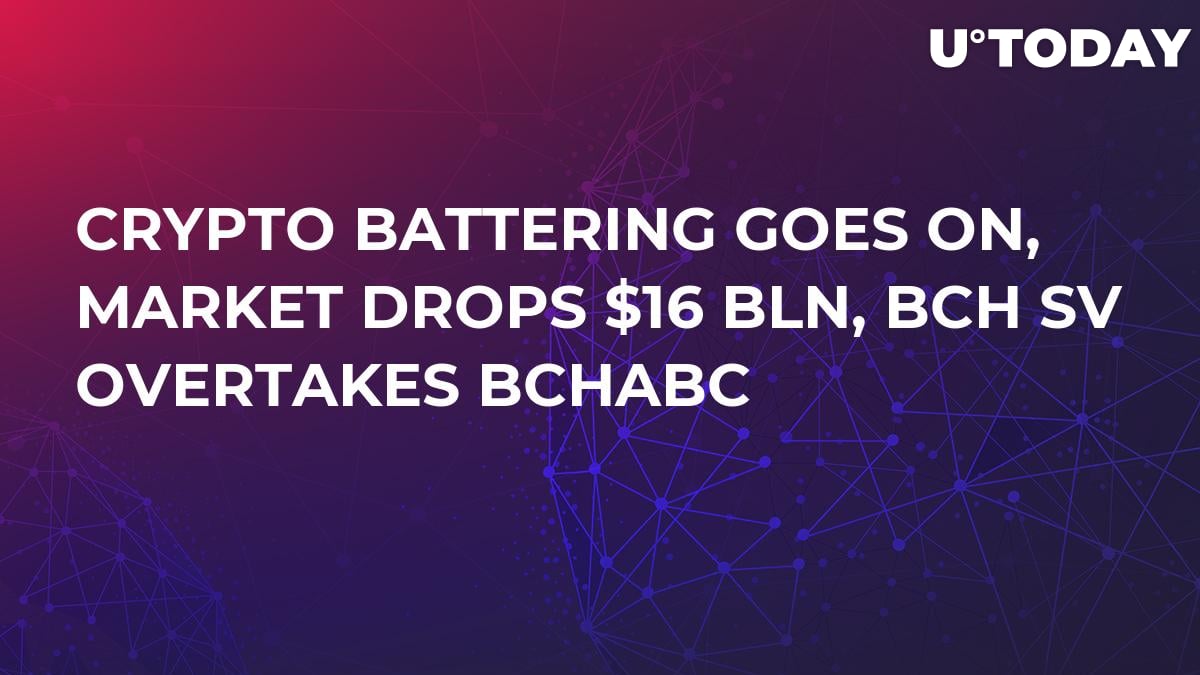 The crypto coin market continues to decline and today, Friday, December 12, Ethereum gets a smashing blow – the rate has fallen to the area of $80, and the last time it happened was in May of last year. This slide crossed out all the gains ETH had during the greenest market in 2017.

The price of BCH has also had a great slide: the coin is now selling at $106.31, having gained slightly from about an hour ago, when it was trading at $94 for the first time in its existence of slightly over a year.

The major group of assets currently in the green is stablecoins: TrueUSD, USD Coin, Gemini Dollar. Other stablecoins are going down, though.

The only two coins on the top-10 list that are in the green at the moment are the stablecoin Tether and the result of the recent hard fork – BCH SV. At the time of writing, the coin has managed to outperform BCH by market cap and is now taking position 5, pushing BCH ABC to number 6.

Correspondingly, EOS has moved to place 8 and Litecoin, the ‘digital silver’, is now on position 9.

What stands behind the sell-out?

Recently, U.Today reported about several big-name traders and investors who predicted a further decline for the crypto market. Among them is Bloomberg’s analyst Michael McGlone, who made a forecast that Bitcoin would continue its fall next year.

DonAlt, who works with technical analysis, also assumed that BTC may slide below the $3,000 mark.

Closed below support, not looking too pretty.
BTC needs to reclaim supports quickly otherwise I expect it to go for the previous lows.
If those don't hold I'm looking at 2900~

There are no supports left on the daily, hope for a fakeout or SFP at the lows. pic.twitter.com/DmkzicM2Tk

As for ETH, the analyst stated that the coin is due to fall by nearly all indicators.

The big sell-off initially began in the middle of November, and since then no large momentum has been demonstrated. Back then analysts seemed to believe it was a free fall. Now the bears’ pressure has significantly grown and virtual coins have lost a great deal of their market value. Experts believe that large holders have begun to sell as well.

Although, according to a Diar report, since spring whales have been purchasing large amounts of Ether, which does not help Vitalik Buterin’s coin to grow.

As December shows, Bitcoin is the only asset that has been able to avoid losing more than 85 percent from its all-time maximum in December 2017, when it soared to $19,500.

Other top-10 coins have had worse luck: XRP, XLM, BCH and EOS have collapsed by over 91 percent from the historical maximums. BCH has declined 97 percent of its value.

For Bitcoin, losing 85 percent of its cost would get the coin to the $2,950 level. Some experts believe this is the scenario the market should be getting ready for.

Analysts believe that unless the market starts recovering, showing bullish trading activity, crypto assets may not reach a proper bottom soon, even with BTC going below the $3,000 mark.