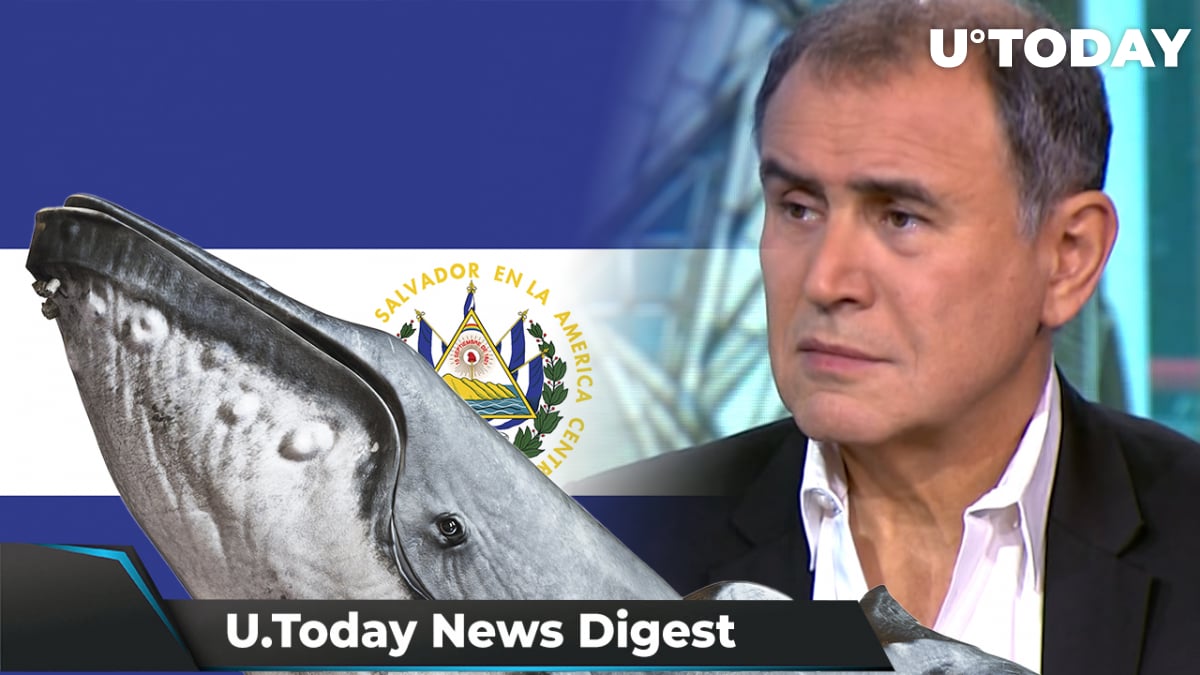 Here are the summaries of the top five news stories over the past day:

According to Nobel Prize laureate Nouriel Roubini, the experimental Bitcoin gambit of El Salvador President Nayib Bukele is “bankrupting” the country, which is why Bukele deserves to be impeached. Earlier this month, El Salvador's sovereign credit rating was downgraded by financial services company Moody's due to concerns that the country’s audacious Bitcoin bet will prevent it from securing a $1.3 billion loan from the International Monetary Fund.

El Salvador has $800 million worth of dollar-denominated bonds that are due in January 2023. In 2021, they showed the worst performance in the entire world.

Despite the current strong correction on the crypto market, some large investors decided to increase their holdings, with analytic services detecting a wallet purchasing a whopping 500 billion SHIB. This anonymous whale has chosen a perfect moment for the purchase since Shiba Inu was going through a recovery rally over the weekend. The purchase could have been aimed at both buying the market dip and supporting the recovery rally on the market. However, this was unable to "save" SHIB: while growing by almost 16% on the weekend, Shiba Inu then swiftly retraced below $0.00002.

Among all known signs of a bear market, the one shared by Dogecoin creator Billy Markus might be the most unusual. As he wrote in his recent tweet, the bear market is sure to come if people are talking about tech. To complete his ironic post, Markus later posted a meme with famous American politician Bernie Sanders and the phrase "I am once again in for the tech." By coincidence, this phrase appears in the crypto space after almost every strong correction.

Glassnode on-chain data shows that the number of large Bitcoin addresses on the network has reached a three-month low. This indicates that the majority of the market has given up on counter-trading the asset and decided to join the bear market. While exchange inflows into Bitcoin are currently low, the volume of funds in USDT shows that the exchange is currently staying relatively high in comparison to the period during which Bitcoin was trading near $60,000.

Perianne Boring, president and founder of the Digital Chamber of Commerce, recently appeared on CNBC's Squawk Box show, where, among other things, she spoke about Bitcoin. When host Joe Kernen mentioned that Bitcoin has so far failed to become a currency due to its high volatility, Boring replied that the current Bitcoin decline is normal. Besides, she stated that BTC is currently undervalued and, according to a number of models that professional crypto investors use, the Bitcoin price will hit between $50,000 and $100,000 this year.