Valeria Blokhina
U.Today’s crypto news digest will not let you miss any of industry’s most important events! 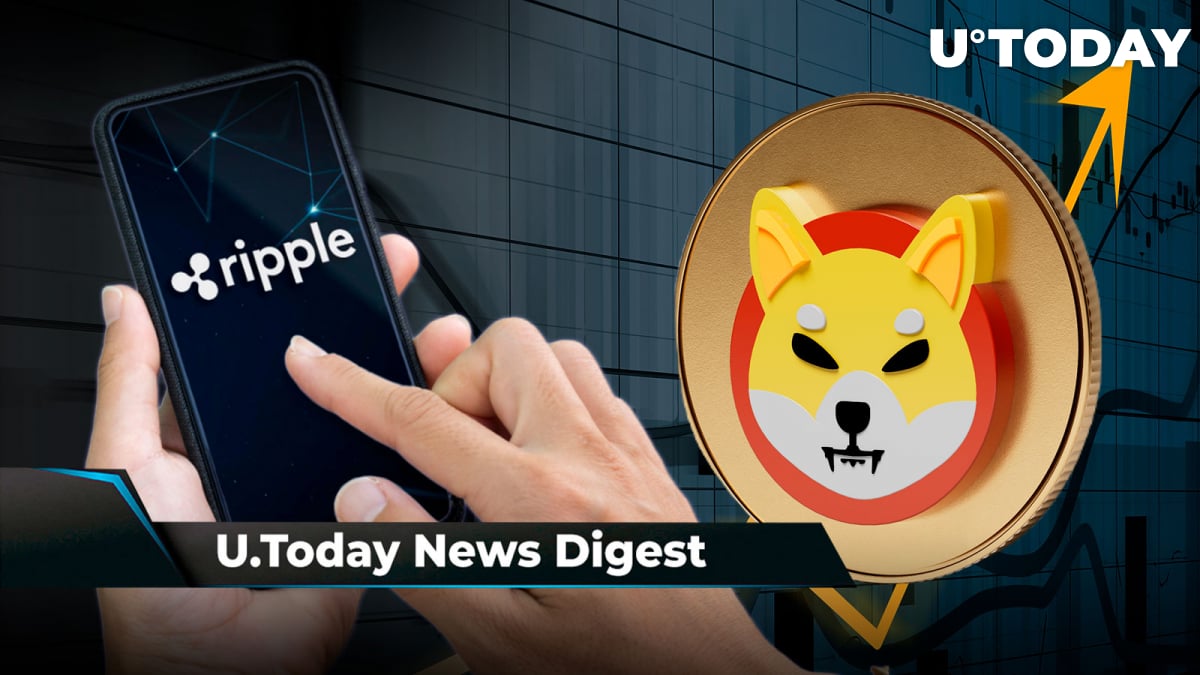 U.S. record producer Eric Finnerud, also known as E-Smitty among professional musicians, has recently taken to Twitter to share a prediction on the XRP price. According to him, the Ripple-affiliated token will not only hit $1,000, but will also reach five digits and then go even higher. Previously, E-Smitty stated that XRP will soon be adopted by the entire world, adding that he pays royalties to the musicians he collaborates with using XRP and accepts payments in this cryptocurrency for mixing, mastering, producing and marketing. The idea of XRP skyrocketing in the future is also supported by David Gokhshtein: he claims that if Ripple wins in its legal battle against the SEC, XRP will soar along with the entire crypto market.

Despite the recent market drop, Shiba Inu saw its trading volume surge 30%, per CoinMarketCap data. Yesterday, 15.8 trillion SHIB worth $160 million was swapped. Higher trading volumes for most crypto assets are frequently caused by increased volatility as experienced traders buy and sell large quantities to capture profits. As a result, investors may have begun to accumulate SHIB to take advantage of the opportunity presented by the recent SHIB consolidation at $0.000010, which led to the increase in the SHIB trading volume. At the moment of writing, the meme coin is changing hands at $0.0000102, according to CoinMarketCap.

As shared by @CryptoLawUS, two more big market players, Phillip Goldstein, co-creator of Bulldog Investors private fund, and ICAN (Investor Choice Advocates Network), decided to support Ripple in its case against the SEC. Both Goldstein and ICAN intend to file an amicus brief to the court, representing the interests of market participants generally and in the particular case of Ripple and the SEC. By submitting the brief, the parties are urging the court to grant the motion of the defendants for summary judgment. The goal of the new amicus brief is to emphasize exactly why the efforts undertaken by the SEC to gain control over cryptocurrencies and other digital assets is "an impermissible and unauthorized exercise of regulatory power."

Yesterday, Milkomeda blockchain interoperability provider announced that its A1 Rollup went live on the Algorand mainnet. The A1 Rollup uses wrapped ALGOs, called milkALGOs, as its base currency. Cardano founder Charles Hoskinson gave a shout-out to Milkomeda’s achievement, tweeting “And by the power of blockchain transitivity, Algorand is now on Cardano” with a Star Wars-themed GIF saying “Everything is proceeding as I have foreseen.” Fundamentally, Cardano, which operates a UTxO architecture, and Algorand, which utilizes the Algorand Virtual Machine (AVM) that operates on an account-based model, are unable to exchange assets or communicate with one another. However, thanks to the Milkomeda A1 rollup, Algorand and Cardano can now be connected.