#DelistBSV: Here's Why Bitcoin SV Could Be Delisted from All Exchanges

Alex Dovbnya
??‍♂️The support for ‘Hodlonaut’ keeps mounting after he was engulfed in a legal battle with the Bitcoin SV creator 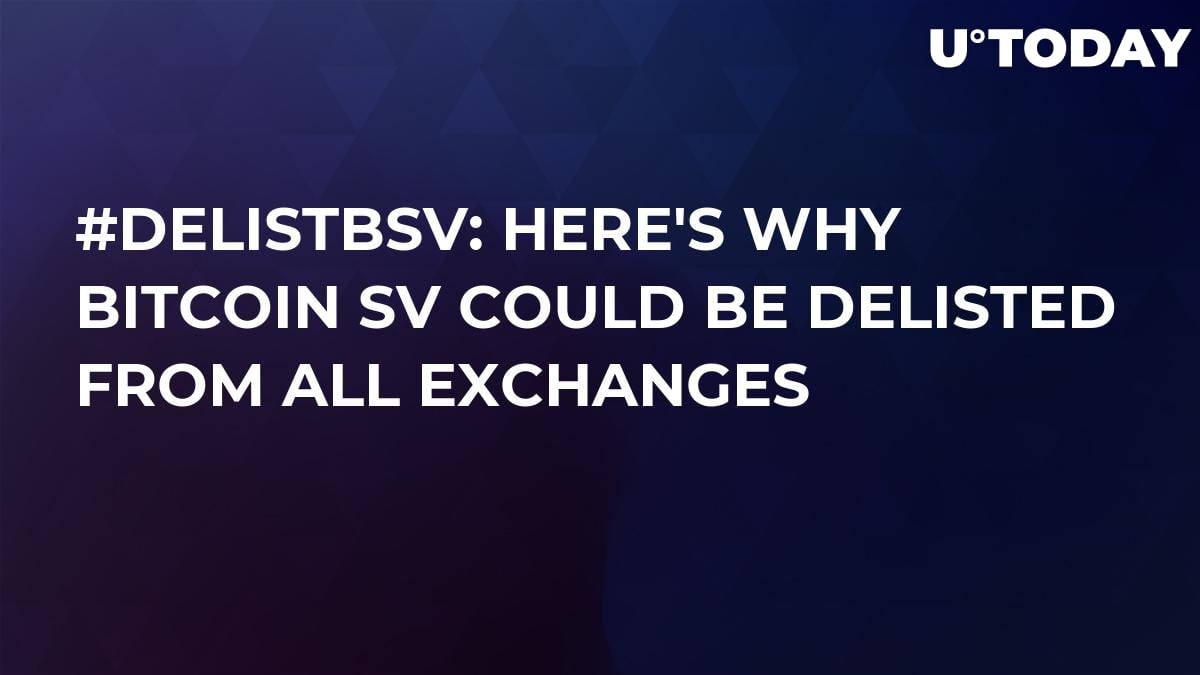 The scope of the #DelistBSV campaign is growing with Morgan Creek Digital co-founder Anthony Pompliano joining the list of crypto influencers who are urging everyone to ditch the controversial Bitcoin Cash fork. The backlash came after Dr. Craig S Wright, the self-proclaimed Satoshi Nakamoto, who sued the individual behind the now-deleted Twitter account ‘Hodlonaut’ for libel.

The end of Bitcoin SV?

Pompliano calls on every single cryptocurrency exchange to delist Bitcoin SV on May 1, 2019. That would be seen as ‘a sign of solidarity’ within the cryptocurrency community.

Every exchange should delist BSV simultaneously on May 1st in a sign of solidarity behind the only Bitcoin that ever mattered.

Related
Bitcoin SV Price Prediction. A Top-Ten Cryptocurrency You Need to Know About

Not afraid of lawsuits

As reported by U.Today, Binance CEO Changpeng Zhao didn’t hold back his criticism of Wright. Binance is the first crypto exchange that publicly voiced its intentions to delist Bitcoin SV. CZ also reassured the ‘Faketoshi’ that he’s not afraid of engaging in a legal battle with him if lawsuits ensue. ‘We have a number of very good/expensive lawyers,’ CZ claims.

Bitcoin advocate Charlie Shrem also joined the party by calling Bitcoin SV ‘an obvious scam that is controlled by an obvious scammer.’

Meanwhile, the support for ‘Hodlonaut’, who also was the one who initiated the #LightningTorch campaign, is growing. At the time of writing this article, the #WeAreAllHodlonaut campaign has already accumulated $14,648 worth of donations with 728 contributors. The website states that Wright and his associate Calvin Ayre are offering $5,000 to anyone who can identify ‘Hodlonaut’ by his tattoos.