Twitter CEO Shades Tron, Says ‘No’ to Ethereum While Bitcoin Remains His Only Bet

Alex Dovbnya
After becoming a participant of the ‘lightning torch’ experiment, Jack Dorsey once again displayed his bullish stance on Bitcoin while snubbing other altcoins 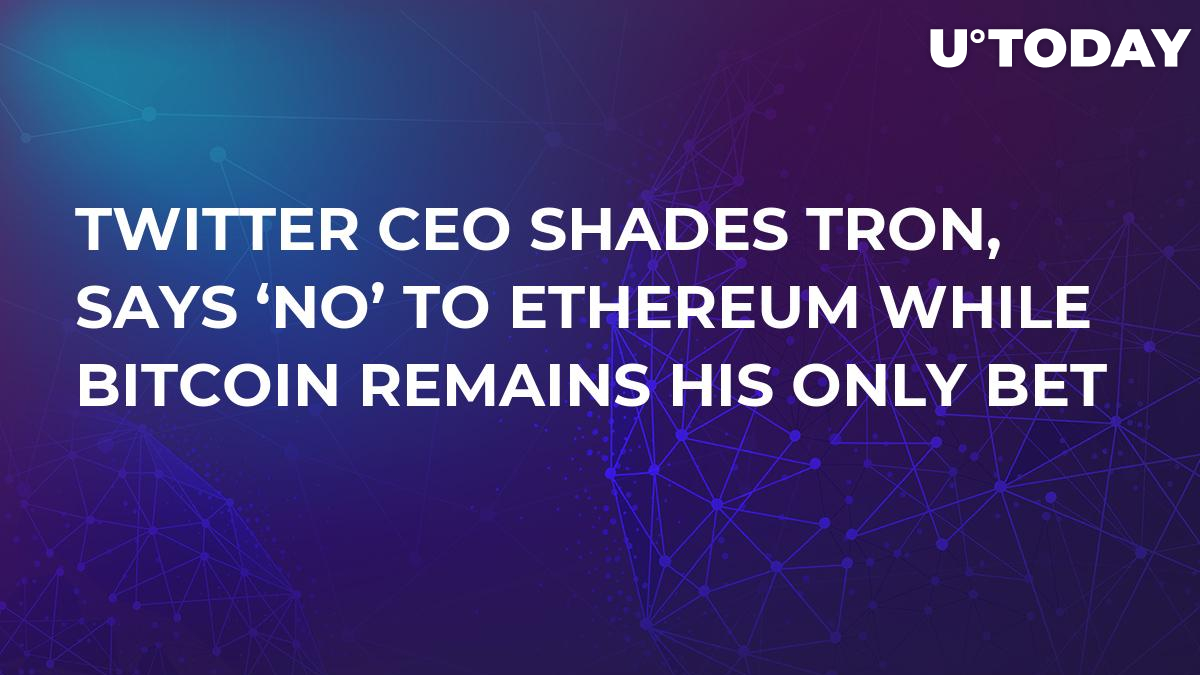 Twitter CEO Jack Dorsey reaffirms his bullish stance on Bitcoin, which turns out to be the only cryptocurrency he holds. Dorsey also reveals that he’s not a fan of altcoins (namely, Tron and Ethereum).

Related
Square Shows Doubling of Profit From Bitcoin Sales, But at Huge Cost

Jack Dorsey became the latest recipient of the so-called ‘lightning torch’. The creative experiment is supposed to spread awareness about the Lightning Network, which is expected to significantly increase the scalability of Bitcoin. Everyone who’s willing to take part in the experiment has to add a little BTC before passing it to another participant (the total amount has so far reached 2.86 mln satoshis with roughly 150 people taking part in the experiment).

The only crypto asset in Dorsey’s portfolio

Dorsey, who also happens to be the CEO of payment processor Square, praised the crypto Twitter community for this experiment while also sharing his stance on Bitcoin. He states that Bitcoin is the only currency he owns, but he didn’t specify how much BTC he has, simply saying ‘Enough.’

He further reiterated his support for Bitcoin by calling the currency ‘resilient’, ‘principled’ and ‘native to Internet ideals’. U.Today reminds readers that Dorsey earlier appeared on a Joe Rogan podcast where he voiced an uber-bullish prediction about Bitcoin becoming the only Internet currency and (potentially) the only world currency.

Tron and Ethereum get snubbed

When asked about other currencies (specifically, Tron and Ethereum), Dorsey was less enthusiastic. He sarcastically replied ‘Love the movie’ after a question about his opinion on the Tron (TRX) token. Dorsey clearly doesn’t acknowledge the coin, referring to Joseph Kosinski’s sci-fi movie instead. Tron CEOJustin Sun ‘strongly recommended’ the actual currency to Dorsey.

Have to strongly recommend you the currency! #TRON #TRX $TRX https://t.co/N6PRGIpHUm

With Ethereum, his reply was simply ‘No’. Dorsey’s Square allowed Bitcoin payments in all 50 US states in August 2018. However, the PayPal rival accepts neither Ethereum nor any altcoins, which once again shows that Dorsey is a true Bitcoinist.