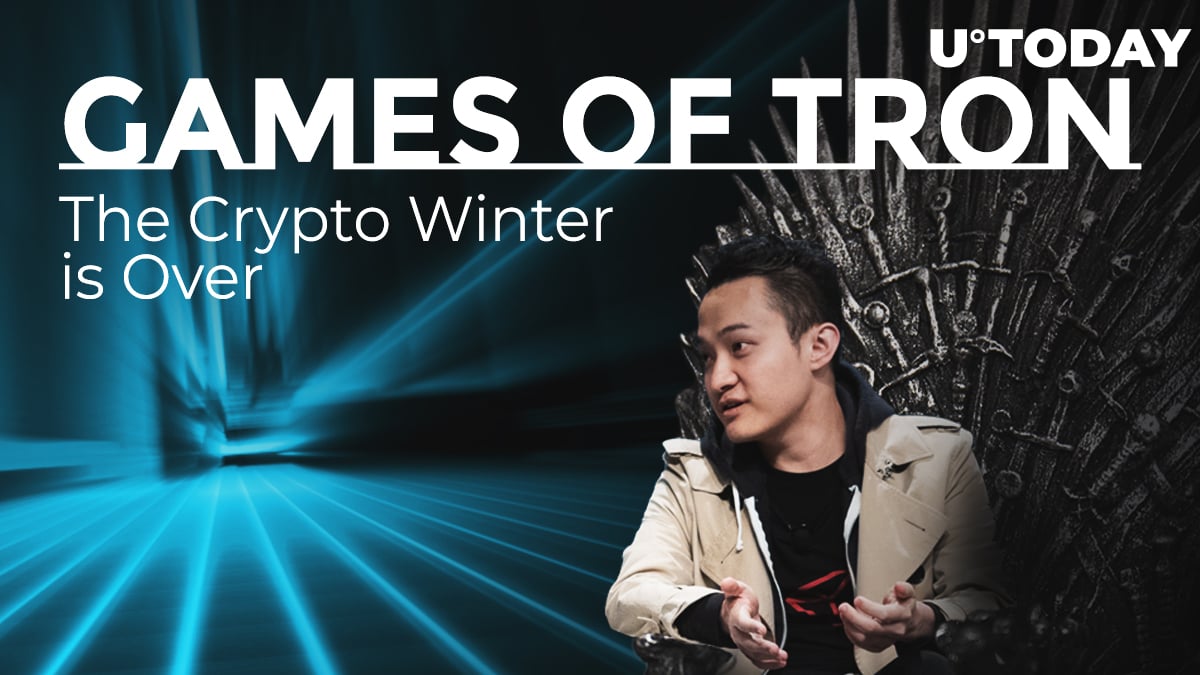 The cryptocurrency market has changed at an exponential rate that it has made it difficult to predict what will happen tomorrow. However, there are individuals in the industry who can bring about change and make the mass adoption of cryptocurrencies real, something that we’ve been dreaming of since Bitcoin’s invention. I believe that Justin Sun is one of these individuals whose role in this industry cannot be underestimated. In light of recent news from China, I had the opportunity to speak with Justin to have him share his opinion on these events and to discuss TRON’s much-hyped partnership with Samsung. Let’s dive right into the conversation.

U.Today: Everyone has been talking about TRON’s partnership with Samsung. This is amazing news for TRON and the crypto industry! I want to congratulate you and your team for this achievement! This is quite an impressive feat! Can you please tell us how it happened and some of the details? Do you know why Samsung chose TRON? What were the main factors?

Justin Sun: First of all, I believe that this partnership is big news for the crypto industry. Right now, TRX is the native currency embedded within Samsung phones after the S10 and S11. That’s why I believe it’s very significant considering Samsung’s large user base, in which billions of people around the globe use their products every day. This gives individuals the opportunity to store TRX as well as TRC10 and TRC20 tokens in their wallets. One can also use these currencies easily to interact with all the dApps built on the TRON and Samsung platforms. So that’s why I definitely believe this is a huge opportunity for our industry. With Samsung starting to integrate blockchain infrastructure into their phones, this will force other phone manufacturers such as Apple, Huawei, Oppo, Vivo, and Xiaomi to also integrate with blockchain manufacturers, giving consumers huge benefits with the mass adoption of blockchain technology. 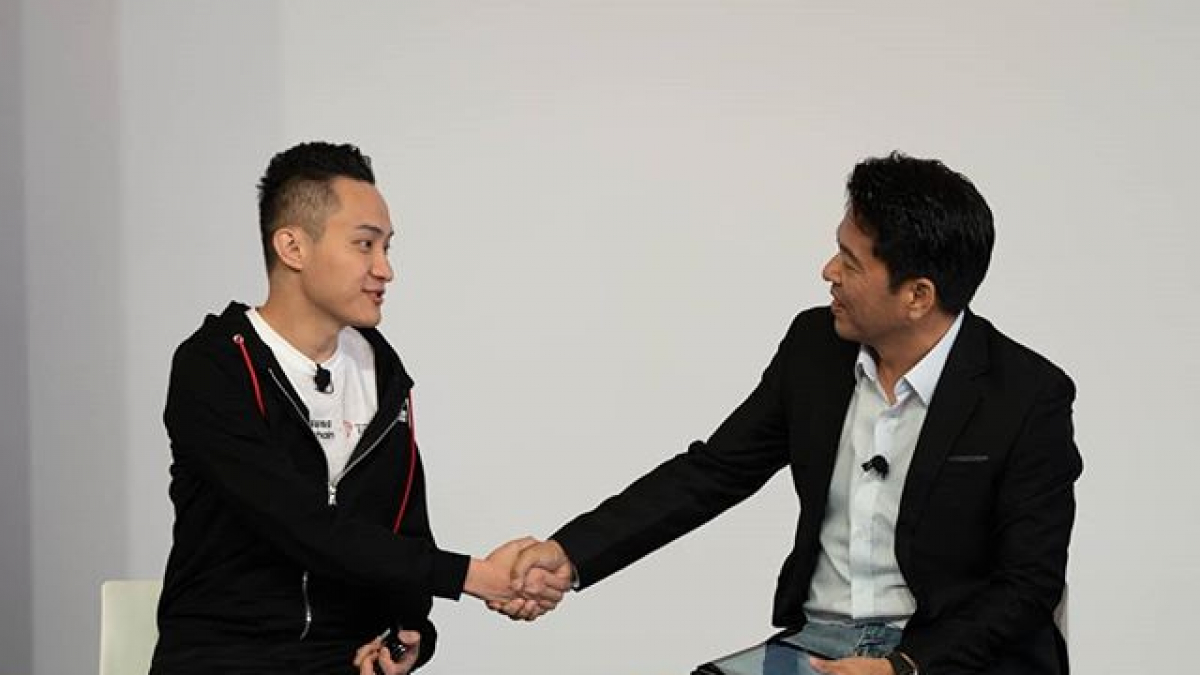 The second reason why I believe Samsung chose TRON is that we have one of the largest blockchain infrastructures in the world. We have hundreds of dApps right now built on the TRON blockchain. By the end of this year, we are definitely going to pass one thousand dApps. At the same time, one can use TRX and the TRON network for a variety of user cases such as a dApp user case, BTFS decentralized storage, and stablecoins such as USDT. The TRON infrastructure can also be used for several user cases. I also believe that after Samsung has fully integrated itself with TRON, Samsung will empower the TRON ecosystem to do more things in the future.

As for now, imagine that you are a developer. You can develop blockchain infrastructure on top of Samsung infrastructure, allowing oneself to do many things. For example, you can do validations for financial institutions, giving you a large user case in the financial and public sectors. With this partnership, I definitely believe that we will have more user cases in the near future.

U.Today: The Chinese General Secretary and President Xi Jinping has publicly stated that China has to embrace blockchain. Do you believe that it’ll help TRON and other China-based blockchain companies grow exponentially?

Justin Sun: Yes, definitely. I believe so. Right now, the Chinese Government is pushing very hard to embrace blockchain technologies and is encouraging all blockchain companies in China see such opportunities. With TRON being one of the largest blockchains originally developed by the Chinese, this will give us huge benefits to its development. As for the future work, we’re looking forward to cooperating with the Chinese Government, as well as with other Chinese publicly listed companies to explore blockchain opportunities. We are also planning to open more offices in mainland China as well. 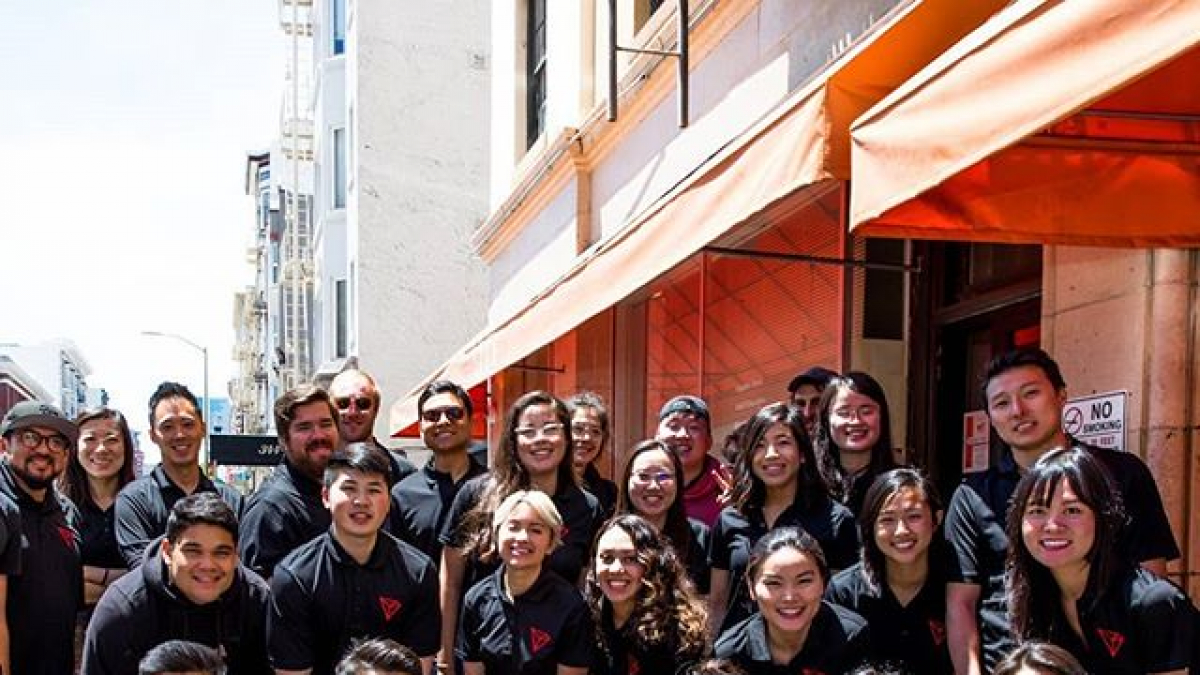 U.Today: Huang Qifan, Executive Vice President of the China Center for International Economic Exchanges, has confirmed that the People's Bank of China plans to roll out its own digital currency called the Digital Currency Electronic Payment (DCEP). What are your thoughts on it?

Justin Sun: I think if the DCPE is available like a currency similar to USDT and USDC, and is an open source and open API for all developers, then I believe that this will be great news for everyone. This will bring 1.4 billion people on board with the blockchain, giving them access to crypto assets and cryptocurrencies. That’s why we’re waiting for more demos and press briefings from the Central Bank of China so that we can understand what really DCEP is.

U.Today: Why did you name your company TRON? I know it sounds cool, and I have seen the movie, but are there any other reasons?

Since I think the whole industry has passed the crypto winter, I think near the end of 2020 and the beginning of 2021 will be the start of the bull market run.

U.Today: What are your favourite games based on the TRON Network? Have you played such games?

Justin Sun: Yes, sure! I play WINk a lot. I’m one of the most active players on the WINk network. The reason I love WINk is because all the games on WINk are neutral, which is guaranteed for all players. They also have a very innovative product. One example would be that they implemented taxes and hold them on the platform. They also plan to deliver more games in the near future, which I believe is going to be amazing.

U.Today: When do you think we should expect the next All-Time High (ATH) for Bitcoin (BTC) and TRON respectfully?

Justin Sun: In terms of the future, I’m definitely very bullish. Since I think the whole industry has passed the Crypto Winter, I think near the end of 2020 or the beginning of 2021 will be the start of the bull market run. That’s why I think we can wait more than half a year to a full year after the Bitcoin halving, which will start around May of 2020. 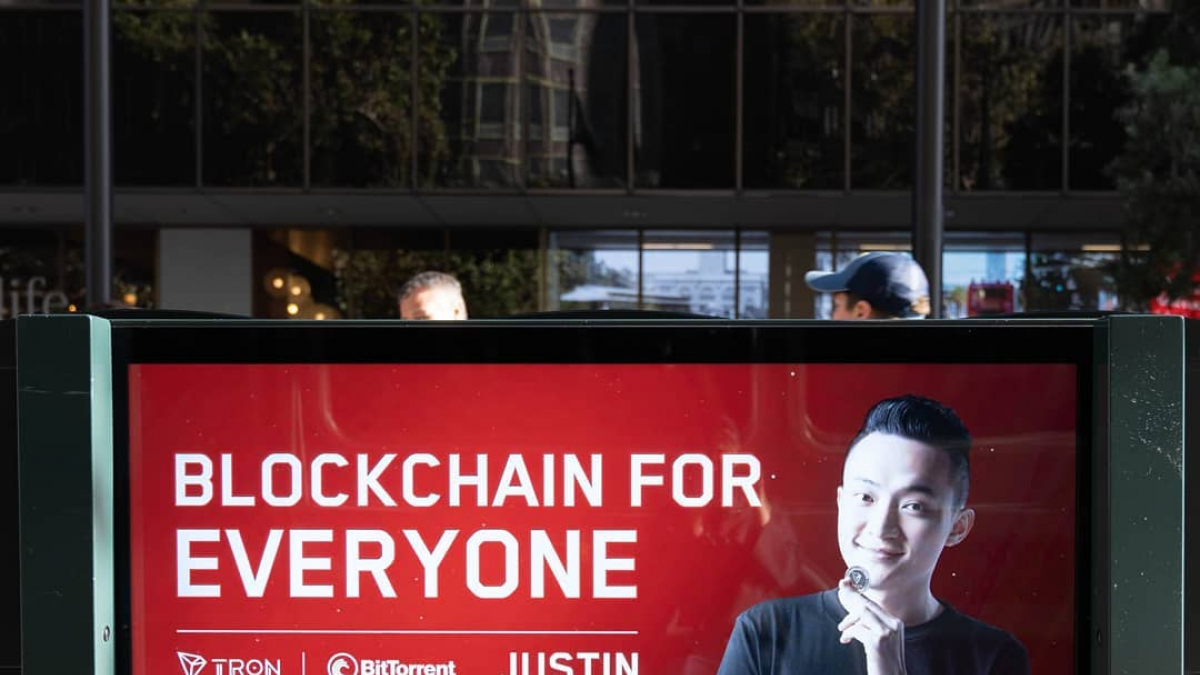 U.Today: What do you think about McAfee’s Bitcoin price prediction by the end of the year 2020?

Justin Sun: What was his prediction?

U.Today: I thought everyone heard that it’s supposed to be $1 million dollars by the end of the year 2020.

Justin Sun: I don’t know if it’s going to be one million per Bitcoin, but I definitely think that the price will be much higher than $20,000, which is Bitcoin’s ATH. I definitely think that the Bitcoin price will pass $20,000, and I have 100% confidence in that because the reasons for that are very simple. You have heard that only about 10-20 million people have crypto wallets as well as some crypto assets, right? With the Samsung partnership, now imagine at least a billion people having crypto wallets. This would be a significant increase in the number of people starting to buy Bitcoin. When China announced that they were going to embrace Bitcoin and Blockchain, I realized that would be bringing in about 1.4 billion people. This is why I say the user base for the blockchain would be the minimum in comparison to the future user case. This is also why I have 100% confidence that the majority of the blockchain network will pass the ATH in the future. 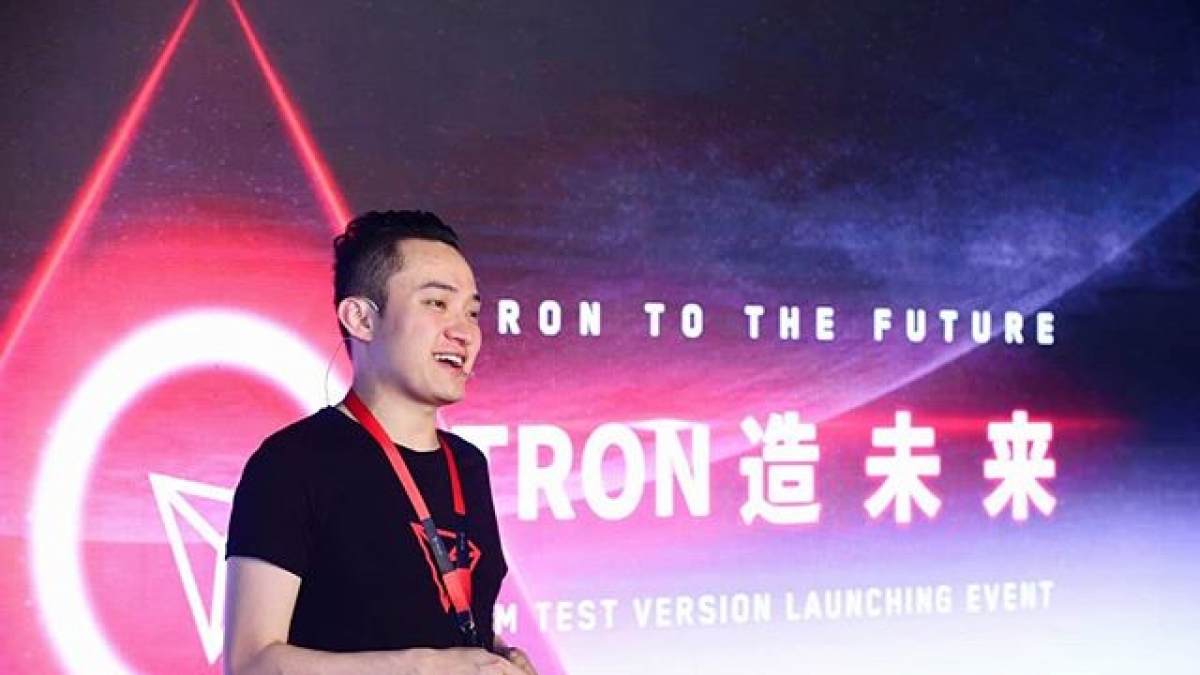 U.Today: When do you think TRON will be in the top 5 of the CoinMarketCap?

Justin Sun: I think the rankings depend on the user case. After launching the Samsung Partnership, I believe that more people will come on board. After passing $1 billion dollars with our USDT issue on the TRON network, and TRON becomes fully integrated with Bittorrent and Opera, we will likely have more user cases, resulting in more users. I definitely believe that TRON will not only be in the top 5, but we will also compete with Ethereum (ETH) and the public chain.

U.Today: Why is TRON attracting so many USDT from other blockchains? Can you please explain how this transfer works?

Justin Sun: Sure! USDT on the Omni platform are really expensive! For every transaction, you have to pay an amount ranging from  $10 to $20. That’s crazy! On TRON network, it’s completely free! The speed is also a big problem. I use the Omni network a lot. When I transfer USDT from the Omni network, it takes half an hour to an hour to make a transaction. But for TRON, it’s almost instantaneous, taking one to three seconds. I think these are the reasons for the increase in the number of  USDT transfers from Omni and Ethereum networks to the TRON network. We offer a better user experience, and at the same time, a cheaper price. In the future, I predict at least 50% of the USDT will migrate to the TRON network.

I definitely believe that TRON will not only be in the top 5, but we also compete with Ethereum (ETH) and the public chain.

U.Today: How do you feel about Facebook’s Libra? Do you think a successful launch of Libra could bring about a mass adoption for cryptocurrencies?

Justin Sun: I think Facebook’s Libra is a great opportunity for the whole industry. But as of right now, I can’t say because Libra is highly regulated by the US Government. I just don’t think Libra has the capability of launching anytime soon. We may expect it to launch in either 2020 or 2021.

U.Today: As we know, the famous lunch with Warren Buffet had to be rescheduled. Do you have any ideas when it would happen? Will it even happen?

Justin Sun: Sure! I think we have an idea of when to reschedule it. We haven’t decided yet. When we decide, we’ll let you know.

U.Today: Thank you so much for your time! It was a great opportunity to speak with you. I wish you guys the best of luck and hope that you’ll reach your goals.

It appears that there’s not much time to see if these bullish predictions will come true or not, but what we are currently seeing is that blockchain technology and cryptocurrencies have grown significantly in popularity. We are eager to see what happens next.

If you think that you have something to tell our readers and you want U.Today to interview you, email us at Editor@u.today