5 Cryptocurrencies With High Potential in 2019 - Updated

Alex Dovbnya
With more than 2,000 coins on CMC, picking the cryptocurrencies with high potential is not an easy feat. What’s the most promising cryptocurrency? 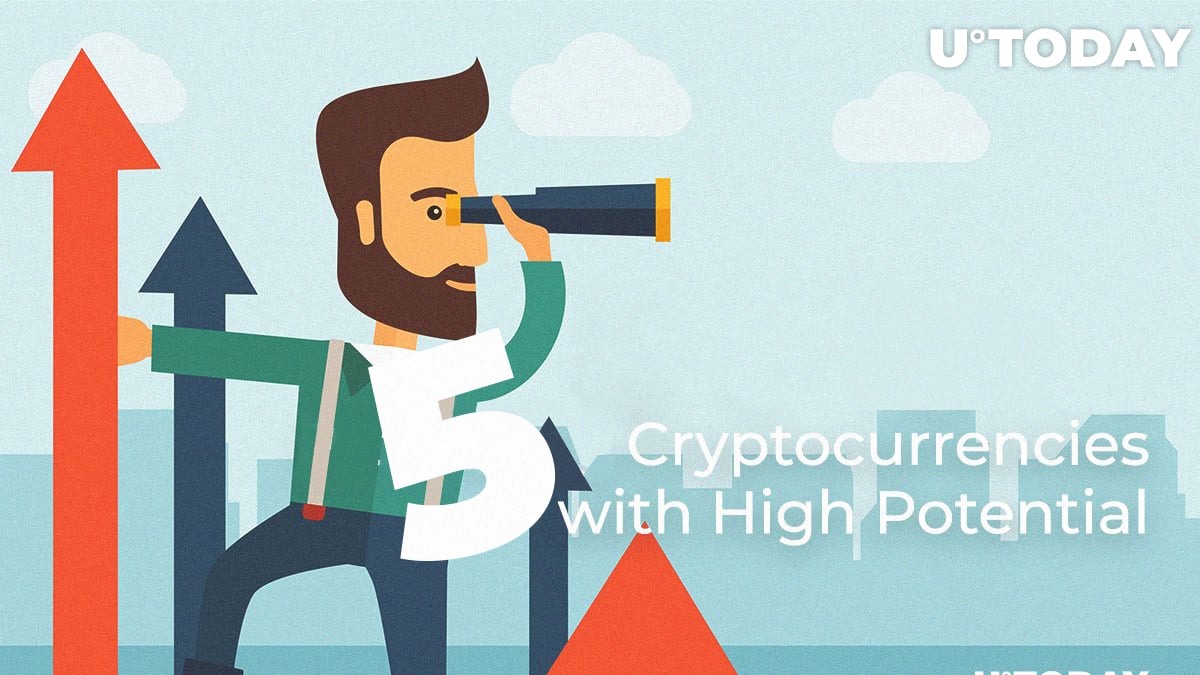 Yes, the crypto market tanked in 2018, but let’s not miss the forest for the trees: there are still of plenty of promising cryptocurrencies with out-of-the-box use cases. U.Today has determined the top 5 cryptocurrencies with huge potential. While compiling our list, we took into account numerous factors, such as the current standing of a cryptocurrency on CoinMarketCap (CMC), its fundamental advantages and the major developments inside the ecosystem of a certain project. Buckle up!

Cardano is a smart contract platform that poses as a better alternative to Ethereum. Notably, the project is spearheaded by a former Ethereum developer Charles Hoskinson. It outperforms Ethereum in the following departments:

In huge contrast to the previous year, 2019 is shaping up to be huge for Cardano. On May 8, the IOHK announced that there were still working on a new roadmap, which will be ostensibly revealed in two or four weeks. Cardano investors will have a clear understanding of the upcoming delivery phrases.

Many agree that the current price of Cardano ($0.04) doesn’t reflect the project’s real value. Hence, Cardano is set to fire its cannon this year.

If there is one promising cryptocurrency, it’s definitely XRP. After overtaking Ethereum to snatch the second spot on CMC, XRP is gradually becoming a major element of the global financial system. Ripple’s RippleNet, a cross-border settlement service, has signed with more than 200 financial institutions around the globe (the National Bank of Kuwait is one of the most recent examples).

After a 49,500 percent rally in 2017, XRP also firmly held second place in January, but a swift rise to prominence was followed by a brutal price drop. Currently, the coin is sitting at $0.30, which is a far cry from its ATH of $3.20.

Fun fact: If all financial institutions teamed up with RippleNet for conducting international payments, XRP price will skyrocket to $692.30, and Ripple would be worth $27 trln.

Binance Coin (BNB) has recently made it to top 10 biggest currencies by market capitalization, which speaks volumes about how promising this cryptocurrency is in 2019. As the name suggests, Binance Coin is the native coin of Binance, the biggest exchange in the world by trading volume, which took the crypto space by storm since its launch in 2017. 75 percent of BNB transactions take place on Binance.

BNB, which could be the most promising cryptocurrency to invest this year, is the driving force behind the company’s success (Binance users are incentivized to hold the token with the help of transactions fees). According to Binance’s white paper, the exchange burns a certain amount of its tokens every quarter (the latest token burn took place on Jan. 16).

The rollout of the Binance Chain mainnet pushed the price of the BNB token through the roof. BNB actually the second cryptocurrency after EOS to reach a brand-new high after Bitcoin’s rocket crashed back to Earth in January 2018. However, the momentum was throttled by the $40 mln Binance hack, the black swan situation that shook the whole community to the core. At the time of writing, the coin is still struggling to recover to its pre-hack price after days of bleeding.

IOTA, just like Cardano, is yet another Blockchain 3.0 project with a heavy focus on the future. MIOTA is poised to change the economy of the Internet-of-Things (IoT), one of the most disruptive technologies of recent years. IOTA enables free machine-to-machine (M2M) payments, one of the major aspects of the IoT. In the long-term perspective, IOTA users will be able to send cheap payments with the following advantages:

*In theory, IOTA could become infinitely scalable. With IOTA’s economic clustering, there will be no throughput limitation. However, there are still physical limitations of your network bandwidth.

Despite occupying 14th place on CMC at press time, MIOTA still mostly remains under the radar. There are already 31 bln IoT-powered devices, and this number is expected to rapidly grow throughout 2019.

On Apr. 29, IOTA made a loud announcement about its partnership with Jaguar Land Rover, which presupposed integrating the ‘Smart Wallet’ technology into Jaguar’s new models.

On the flip side, one should keep in mind that the Tangle is a very nascent technology that has to stand the test of time.

Basic Attention Token (BAT) is the native token of the Brave browser, an open-source project that is based on Blockchain technology.

The main advantage of Brave is that is allows its users to block all ads without installing additional extensions (such as Adblock). Brave CEO Brendan Eich is the creator of JavaScript.

With the launch of Brave Ads in April, BAT can now live up to its name and pay you for your attention (which is one of your most valuable assets per se). Users, which are usually ignored by advertisers, will be get 70 percent of the browser’s ad-driven profit if they enable the feature.

At the time of writing this article, BAT is sitting at 23rd place on CMC with a price of $0.35. BAT has been making strides since the Coinbase listing in October 2018 (the exchange would never touch a project that doesn’t hold any promise).   The token has a lot room for growth if to consider that the Brave 1.0 hasn’t been even released yet, and more exciting features are coming this year.

This article is focusing on the most promising altcoins, but one should also consider keeping tabs on the flagship cryptocurrency – Bitcoin. The entire cryptocurrency market usually reflects BTC’s price movement, and the number still refuses to cede ground to numerous competitors. U.Today has recently revealed the major five reasons why you should still consider investing in Bitcoin in 2019, and many factors indeed show that Bitcoin could be up for a big year. Institutional investors are finally warming up to Bitcoin due to low volatility in the market.