Popular Cryptocurrency for Mining in 2019 - Updated

Alex Dovbnya
Cryptocurrency mining in 2019 can still be profitable. Check out our list of the best cryptocurrency for mining this year and start gaining tokens 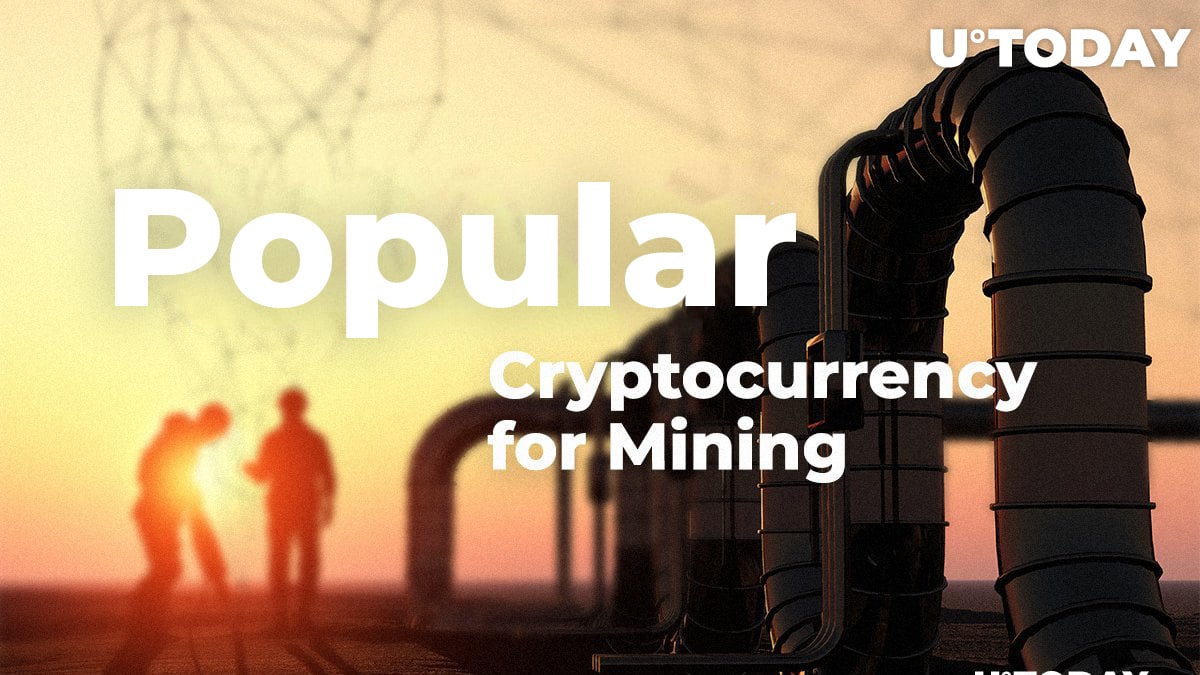 The double-whammy of sinking prices and constantly rising mining difficulty was a complete knockout for Bitcoin miners. U.today determines whether you should stick to Bitcoin mining in 2019, and what other altcoins could be a good option the following year.

Picking a new currency to mine

Due to the decline of cryptocurrency mining, it is rather challenging to find a new coin to mine given that cryptocurrency price predictions change almost every day. If you want to pick a new currency, you should perform an in-depth fundamental analysis (the technology behind the coin, the team of developers, etc.). We’ve compiled the list of top factors you have to take into account when mining new coins:

Meanwhile, these are some of the ‘red flags’ that you most likely want to avoid when choosing a new coin:

Making sure the mining is profitable

Once you’ve picked the coin that suits all the above-mentioned parameters, you have to make sure that running your mining operation will result in generating a profit (a rather challenging thing to do considering the current state of cryptocurrency mining). There are numerous factors that you have to take into account, such as electricity expenses, mining difficulty, etc. We won’t enumerate all these points since there are plenty of complex mining calculators.

Another important point you should keep in mind is that these parameters are constantly fluctuating, which essentially makes the mining industry so unpredictable. Case in point: mining giant Bitmain, which recently sacked half of its employees after tons of hype surrounding its upcoming IPO that is already shaping up to be a big underperformance.

Let’s start with an ultimate O.G. currency – Bitcoin, which turned into a multibillion-dollar business. This December, the mining difficulty of the king BTC experienced a 15 percent decline due to smaller miners leaving the Bitcoin Blockchain en masse after major experts failed with their predictions. In the middle of the crypto rout, Bitcoin miners still managed to rake in an impressive $4.7 bln, but the point is that large mining farms are primarily responsible while run-of-the-mill miners remain on the sidelines.

The exodus of miners that was followed by a difficulty drop makes it much easier for new miners to enter the market. Moreover, it has been recently estimated that mining Bitcoin is still 50 more profitable than mining one of its iterations – Craig Wright’s ‘mining-friendly’ Bitcoin SV.

The same pertains to another major currency – Ethereum, which has been facing bearish predictions the whole 2018. Miners who can benefit from low electricity prices still remain in business in the yo-yo market as the mining difficulty continues to drop. Since Ethereum is way too established, you might also opt for Ethereum Classic, whose mining difficulty has been tanking as of recently.

On a positive note, Bitcoin miners managed to earn $305 mln in April due to an unexpected price rally (that’s a 30 percent increase compared to the previous month). Notably, Bitcoin transaction fees also spiked by a whopping 250 percent in April, adding $14 mln to the miners’ pockets.

As reported by Cryptocomes, China is currently considering banning Bitcoin mining due to its environmental impact. Even though such a U-turn is still improbable, China pulling the plug on the local mining industry could be a real game-changer for Bitcoin since it would push one-third of miners out of the market.

Monero is currently the 13th biggest currency by market capitalization. The flagship privacy coin is particularly attractive for miners given its ASIC-resistance. That essentially means that you could mine Monero without buying expensive hardware, thus disrupting Bitmain’s monopoly, which could be already facing serious woes according to expert predictions. Bitmain came up with a special miner for Monero, but the dev team throttled it with a fork that could make ASIC mining inefficient.

Of course, the coin’s mining profitability tanked due to the crypto rout, but cheap GPU prices combined with low electricity still make a good combination for mining Monero in 2019. However, do not expect to gain profit from selling XRM on a daily basis despite some positive price predictions.

Alternatively, you can also consider mining another privacy coin – ZCash, which is responsible for more than 90 percent of all Equihash mining, though the recent rate spike was a blank swan situation for miners who were up to different predictions. Back in July 2018, ZCash made headlines because of its remarkable mining profitability: it outperformed Bitcoin by 400 percent.

On Apr. 24, the hashrate of Zcash reached its all-time peak of 4 GigaHash/s, which marked a 42 percent increase since the beginning of 2019. The surging hashrate obviously took a toll on the coin’s mining profitability. Nonetheless, miners will keep tabs on this coin due to the forthcoming halving that will take place in 2020.

Grin is yet another PoW-based coin that should be considered for CPU mining. Its developers have also opted for ASIC resistance, which will be achieved with the help of a hard fork that will be released every six months.

This altcoin is a good solution for mining in 2019. Ravencoin is built on a fork of the Bitcoin code. Its mission is to efficient creation and transfer of assets from one side to the other based on Bitcoins and Ethereum. Ravencoin is an open-source American blockchain that has recently gained popularity due to the X16R algorithm that it uses for proof-of-work mining.

It should be noted right away that RVN mining with the help of ASIC will fail; the developers from the first days of the altcoin creation have declared their dislike for these devices. Coin mining speeds are variable, so mining in solo can be unprofitable. That’s why we recommend joining a large pool.

Litecoin is yet another old-timer on the block that has been around since 2011. It poses a good option for those who want to opt for an already established currency instead of buying coins with little to no background.

LTC stands out because of faster transaction confirmations (the block generation time is restricted to ten minutes), and a more efficient storage solution.

A quick look at r/litecoinmining will tell you that the community is in low spirits right now, with some mining for the sake of heating the house or simply keeping their hobby. Our recent price prediction shows that Litecoin is currently following a bullish path after witnessing solid price gains in April. Moreover, the Litecon halving, which is slated for Aug. 6, is expected to a major catalyst for the coin’s growth

Bitcoin Gold is a fork of Bitcoin that was created specifically for GPU mining. Apart from disrupting the hegemony created by super-powerful ASIC miners, Bitcoin Gold is also a marginally safer coin since miners do not have to rely on the hardware that is specifically designed to mine this coin. Hence, BTG miners won’t have to throw away their Antminer if their cryptocurrency lives up to most pessimistic price predictions since they can easily put their botnet on something else.

How to maximize your mining profits?

We’ve listed some of the most conventional (and fairly unconventional) choices, but it’s rather challenging to boil down your choice to one specific coin when there are more than 2,000 options on the table. Hence, it would make sense to mine several coins simultaneously (up to all major mineable currencies) to hedge against potential losses. It is not a piece of investment advice, but swapping currencies is an objectively good option in the highly volatile market where price predictions tend to change very quickly.

Is Cryptocurrency Mining Profitable In 2019?

Yes, you heard it right – CPU mining is still a thing in 2019 (just like in Bitcoin’s early days when even the boldest price predictions couldn’t foresee its present-day price). Of course, do not expect to make a single dollar (or even a single cent) with your old laptop. However, for the sake of collecting coins whose price could skyrocket one day, you can consider mining the following CPU-oriented cryptocurrencies:

You can constantly keep track of new GPU coins with the help of the website newcpucoins.com. One of the best strategies that you can pick is to mine a coin that is basically worth nothing after doing in-depth research of the project and the team. The cryptocurrency market is still very nascent, and there’s a good chance that the value of a new coin could blow up in the future (just make sure not to sell them prematurely).

Over the past few years, cryptocurrency mining has turned into an industrial-level venture, which means that the days when somebody could make quick dollars with crypto mining are pretty much over despite some predictions about the comeback of mining craze. In the first half of 2018, cryptocurrency prices began to fall, and many miners were forced out of business.

With the right approach, mining can still be profitable, but it’s not a get-rich-quick scheme anymore, and the profitability margin is much lower. Even if most bullish price predictions come true, expect more super powerful ASIC miners to appear on the market.

After all, you can still mine 1 BTC in Venezuela while only forking out $531 because of its extremely low electricity rates. However, don’t be tempted to pack your bags to this ‘crypto paradise’ given that the local government is not particularly welcoming to miners, with some of them even going to jail. There is also another option: Iran, where mining still turns a profit with the country’s government-subsidized energy.

Hopefully, U.today helped you to come up with the best mining strategy to survive this crypto winter.