Facebook Could Rake in $19 Bln After Rolling Out Its Cryptocurrency: Barclays 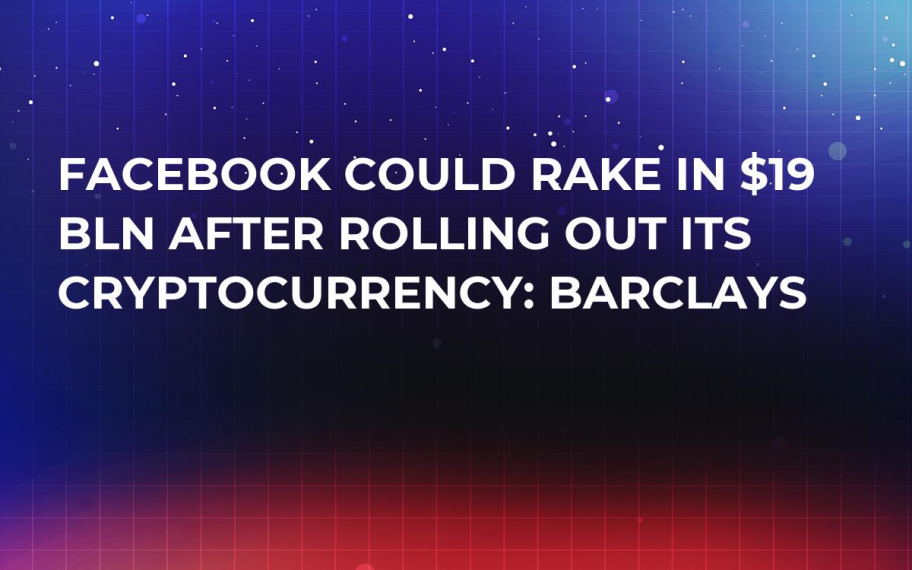 While social media giant Facebook is acting coy about its plans to launch a cryptocurrency, Wall Street firm Barclays has already estimated that its forthcoming crypto project could turn out to be a $19 bln revenue opportunity. Barclays’s Ross Sandler also predicts that the successful rollout of the new currency will ‘change the story’ for the company’s shares.

As reported by U.Today, Facebook Coin is expected to be launched in the first half of 2019. Facebook is already sopping its dollar-based stablecoin to numerous cryptocurrency exchanges. However, the Mark Zuckerberg-led company, which is currently expanding its Blockchain team, has yet to confirm its crypto plans.

Last year, Facebook was engulfed in a major scandal after it was revealed that Cambridge Analytica would collect the data of 50 mln users that without their permission. Facebook somehow managed to dodge a big bullet with this one – its shares rallied 30 percent in 2019. However, creating a new revenue stream is crucially important, and Facebook’s bet on crypto could be the right option.

Facebook debuted its own virtual currency dubbed ‘Facebook credits’ back in 2010, but the initiative hit a snag due to interchange cost that took a toll on the company’s profitability. Now, the media giant, which also owns Instagram and WhatsApp, is going to revitalize the idea by introducing a cryptocurrency for micro-payments and domestic money transfers.

With that being said, Facebook is still facing plenty of challenges. The company has tainted its reputation after the Cambridge Analytica disaster, and it currently has to win trust from the general public.

In the cryptocurrency community, the reception of Facebook’s upcoming project was mixed. While some think it could push crypto into the mainstream, others are dismissing the possibility that it could realistically compete with Bitcoin. Cryptographers even laughed at it.