Alex Dovbnya
??ADA holders will surely sleep better at night, knowing that their holdings are safely stored with the help of Ledger Nano S 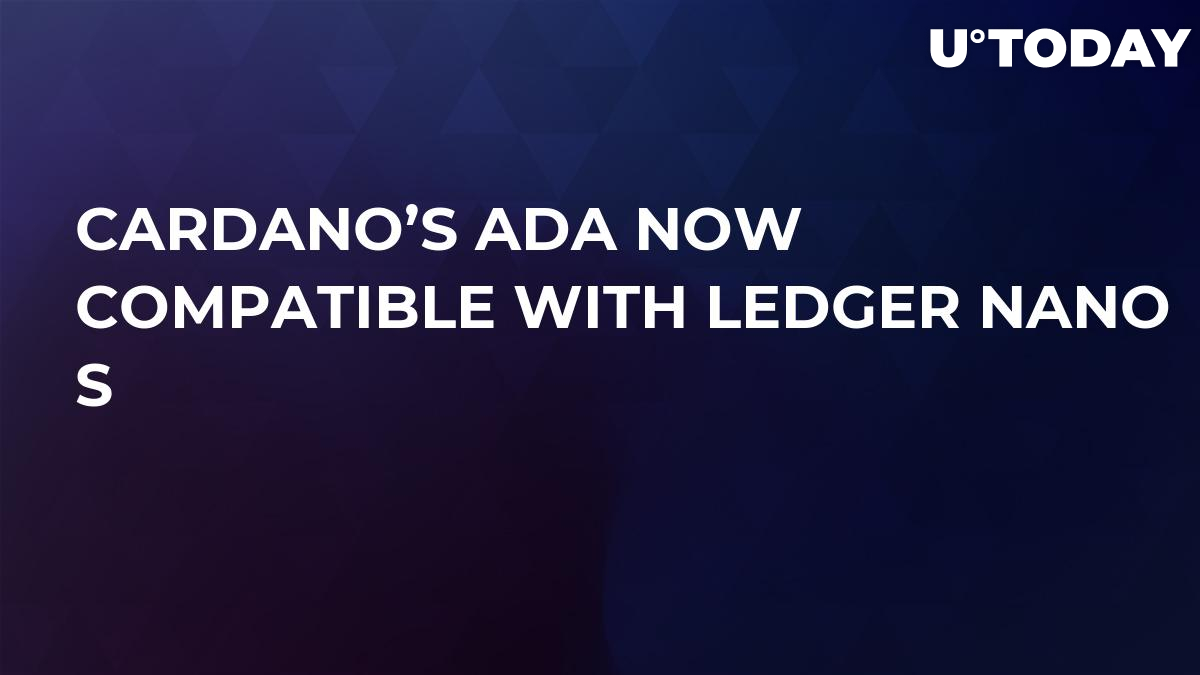 Cardano Foundation has just announced that ADA can now be stored with the help of Ledger Nano S, the most popular hardware wallet. This is possible because of the integration with EMURGO’s Yoroi wallet.

Cardano is now supported by Ledger! This initiative has been sponsored by the Cardano Foundation through funding the development of the Cardano Ledger app and associated software libraries. Read the full blog here: https://t.co/EuTp0R9p7u

All rumors are true

As reported by U.Today, ADA was one of the top gainers inside the CMC top 10 with a 7 percent price increase. ADA’s rumored integration on the new Ledger Nano S, the only CSPN-certified hardware wallet, was among the reasons behind the price gain.

IOHK CEO Charles Hoskinson started acting coy with ADA holders on March 14 when he posted a picture with a Cardano logo on Twitter without going into any additional details about the wallet support.

Cardano Ledger. Got the first one :) pic.twitter.com/kZTN5hpmEP

On March 25, it was pretty much confirmed that the Cardano Ledger app, the development of which was founded by Cardano Foundation, was already in the pipeline.

Coming Soon: One of the most requested apps for the Ledger Nano S. pic.twitter.com/wfWmEnNp34

The news is very significant for ADA holders who now have a way to safely store their crypto holdings. Hot wallets do not provide users with an essential level of protection – a whopping $850 mln was stolen from different exchanges in 2018. Ledger CEO Eric Larchevêque claims that they offer ADA investors ‘world class security’.

However, be careful not to reveal your seed phrase to fraudulent Ledger applications (Ledger doesn’t require such information).

We have been made aware that there are scam Ledger apps online. Ledger will not ask for your Cardano seed words. To use Ledger, please head to their official website: https://t.co/TGZg6CM3Tn