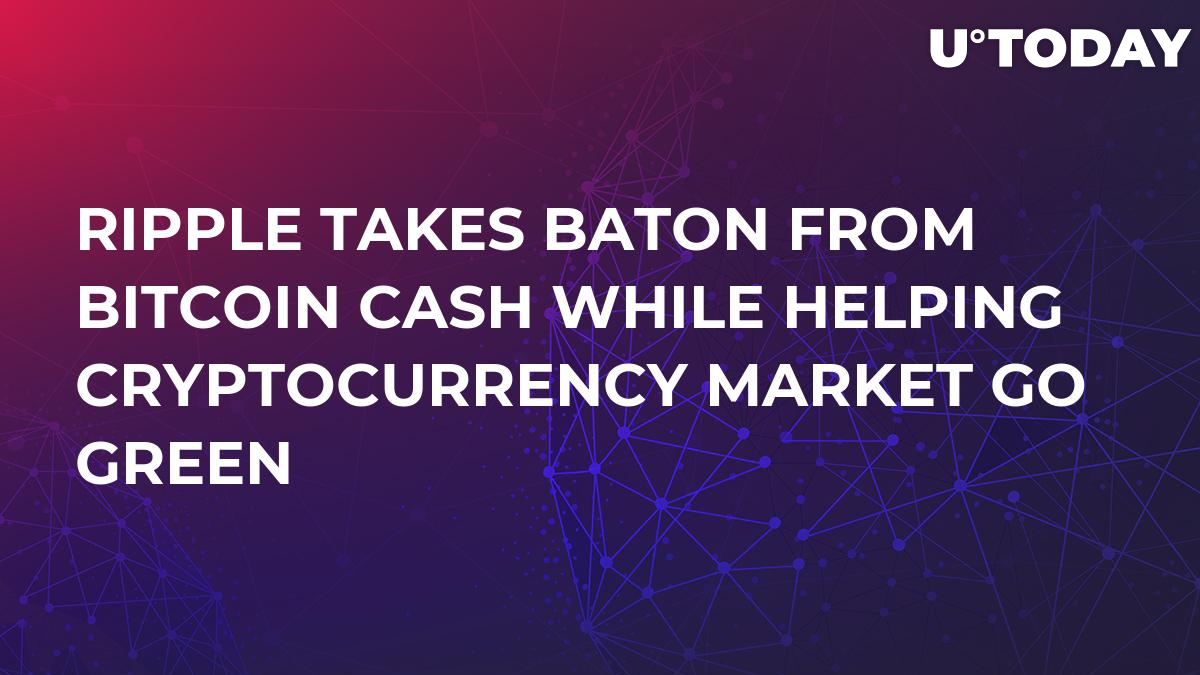 At the beginning of the week, it was Bitcoin Cash that was showing the biggest gains as the controversial Bitcoin fork readies itself for another potential fork. Now, XRP has taken the small wave of momentum and had a rally of its own, up over 16 percent, helping the rest of the cryptocurrency market go mostly green.

The total market cap of the cryptocurrency market is now sitting at over $215 Billion, and although the Bitcoin price itself sits pretty stable in the $6,400 range, there is good growth for some other key coins.

The likes of EOS, Cardano, Tron, and Stellar along with XRP are all showing decent gains in the top 20 coins, while the biggest winner is actually Digitex Futures. There are some losses to report, but none over the seven percent being shown by RavenCoin and Chainlink, the latter correcting after it acquired Town Crier.

Ripple, as a company with its XRP, is often the beneficiary of good news when it comes to adoption and integration. The bank-based cryptocurrency is aiming to integrate with as many mainstream banks as it can, and this has helped it recently.

At the Global Islamic Economic Summit, Ripple’s Global Head of Infrastructure Dilip Rao disclosed the company’s plans to expand into the Middle East by establishing an office in Dubai.

“I think the UAE government saying that 50 percent of all government transactions will be on distributed ledger technology by 2020 is a fantastic way to encourage innovation, to bring Fintechs to your market and then to then build the capability locally to iterate on those solutions that the Fintech bring to you,” Rao explained.

There is already evidence of some of the Middle Eastern companies using XRP to help with cross-border payments. This expansion into the Middle East, and even towards Asia, could be pushing the price of XRP up.

The cryptocurrency markets, especially the price of Bitcoin, has been incredibly steady and even a bit boring, some could argue. However, the recent rallies from Bitcoin Cash, and Ripple now, have helped other coins make a few big steps in their gains.

EOS and Stellar are up nearly three and four percent respectively while Cardano and Tron are also up almost four percent. However, what is interesting to note is just how steady Bitcoin has remained, usually being the catalyst for any general growth across the markets.

As Kevin Davitt, senior instructor for The Options Institute at Cboe Global Markets, has outlined in a video that the average weekly volatility for the week ending in Oct. 26 was just three percent for XBT-CBOE Bitcoin futures, the lowest ever level since they launched for trading Dec. 10, 2017.

While the movement in the cryptocurrency markets over the past few weeks has been incredibly sideways, especially for a market so well-known for its volatility, there is still hope that there could well be a year-end rally.

The likes of Mike Novogratz reiterated that Bitcoin would reach new heights in 2019, surpassing $20,000. His belief is that this will come off Institutionalized FOMO.

Indeed, there has been a bout of increased interest and adoption of cryptocurrencies as well as the underlying Blockchain technology, but it remains to be seen if this will translate into the investor interest.