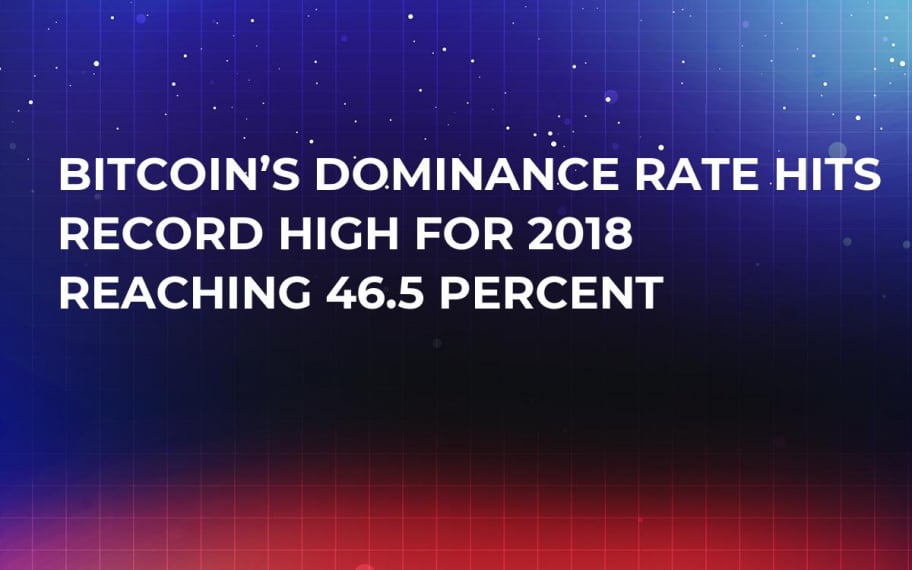 According to the data provided by CoinMarketCap, Bitcoin’s (BTC) dominance has recently hit a 46.5 percent mark for the first time since December 2017. This sudden spike (more than five percent just in a couple of hours) is boosting investors’ confidence while Bitcoin’s recent bull run seems to be more than an ordinary fluke.

The increase of Bitcoin’s dominance conveniently coincided with BTC’s price reaching its two-month high on July 23 ($7,820). That means that the demand for the king of cryptocurrencies continues to rise and Bitcoin’s reign, despite some gloomy predictions, might not be ending anytime soon. Bitcoin is still the ‘gateway cryptocurrency’ for the majority of investors: only after purchasing BTC they may start diversifying their crypto holdings.

At the same time, some prominent altcoins, which were fueling speculations over a possible ‘flippening’ scenario during Bitcoin’s darkest days, continue to bleed. As of July 23, Ethereum’s (ETH) market share is currently sitting at 16 percent (that is a 17 percent decline from its all-time peak). Ripple (XRP) follows the same trend falling to 6.2 percent.

Investors’ interest in Bitcoin is rather expected since this is the oldest and the most established cryptocurrency on the market. Furthermore, there are plenty of other factors that are linked to BTC’s recent success including the launch of Coinbase’s custodial service and BlackRock’s recent interest in cryptocurrencies. The possible introduction of a Bitcoin ETF in August has also undoubtedly gave a push to the ongoing bullish trend.

CoinMarketCap’s dominance represents Bitcoin’s share in the total market cap. BTC's dominance rate had been steadily holding up in the 80 percent range up to March 2017. The king of crypto had significantly increased its market share during the ‘December boom,’ but, shortly after that, Bitcoin’s dominance hit a brand-new low and shrunk to 33.2 percent.

However, it is worth mentioning that Bitcoin’s dominance does not adequately represent the current state of the crypto market since numerous coins appear literally every day. Despite the mass flood of new altcoins, Bitcoin is still holding strong in that metric, and the bullish uptick will only keep increasing its market share.